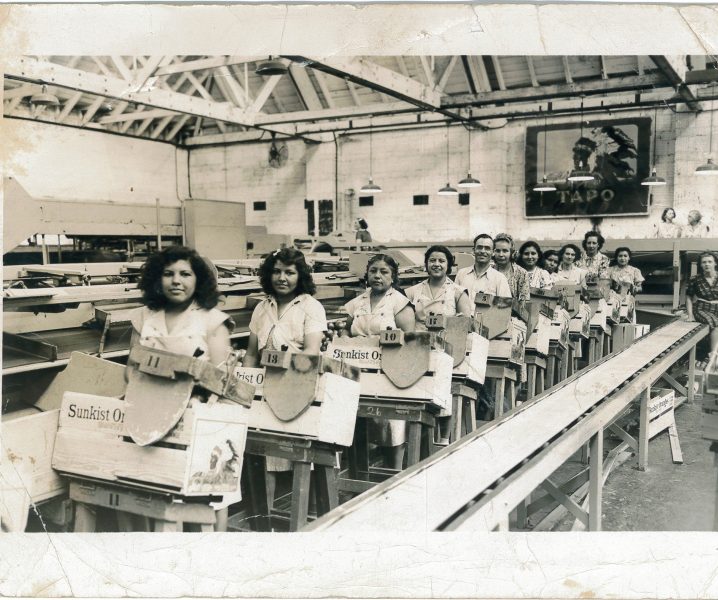 3.1 Why Did People Settle in California?

California’s diverse geography, mild climate, and plentiful natural resources have attracted settlers for many thousands of years, and these same features have created opportunities for lucrative work and innovation. The primary sources found here are intended to show students the geographic and economic factors that encouraged settlement and development of the citrus region of Southern California.

Why Did People Settle in California?

Throughout California, the geographic setting has had important effects on where and how localities developed. Students begin their third grade studies with the natural landscape as a foundation for analyzing why and how people settled in particular places in response to the question, Why did people settle in California? Thus teachers may utilize a variety of primary and secondary sources such as photographs, Internet resources, DVDs, and field trips to establish familiarity with the major natural features and landforms of their county and California including mountains, valleys, hills, coastal areas, oceans, lakes, desert landscapes. As students observe, describe, and compare these features, they learn to differentiate between major landforms, and they begin to consider the interaction between these features and human activity. The teacher can initiate inquiries into human-environment interaction using literature such as A River Ran Wild by Lynne Cherry and River Town by Bonnie and Arthur Geisert. In conducting research for this activity, students learn to differentiate between major landforms in the landscape and develop an understanding of the physical setting in which their region’s history has unfolded.

Focusing on a California natural regions map and reader, students can research the ecosystems found near them; the resources provided by these ecosystems; and, the ways that people use them. They investigate the goods and services provided by these ecosystems and how they are used to support human communities (California Environmental Principle I, EEI Curriculum Unit: The Geography of Where We Live 3.1.1–3.1.2, see Appendix F).

California’s diverse geography, mild climate, and plentiful natural resources have attracted settlers for many thousands of years, and these same features have created opportunities for lucrative work and for innovation. This inquiry set focuses on the citrus industry, an industry reliant upon the fertile soil and sunny, temperate climate of Southern California. The primary sources found here are intended to show students the geographic and economic factors that encouraged settlement and development of the citrus region of Southern California. There are many other industries that depend on California’s unique combination of weather, landscapes, and natural resources, and students can investigate additional industries — like gold mining, ranching, oil, timber, and aerospace — to learn what environmental features make them possible. Citrus cultivation in California began during the Spanish era, in the fertile lands surrounding the missions of Southern California. The Gold Rush brought hundreds of thousands of hopeful miners to California beginning in 1849, most of whom wanted to buy, and not grow, their food so they could focus on mining. Rich in vitamin C, citrus provided important nutrients to ward off scurvy, a disease commonly known among sailors and others without access to fresh foods. In the mid-nineteenth century, citrus growers in California had a regional market for their fruits, but the seed-filled oranges were not popular enough to command a broader market. Then, in the late 1860s, the U.S. Department of Agriculture obtained cuttings (branches that could be used to grow a new variety of fruit) from a flavorful, seedless orange tree in Brazil. The USDA entrusted two saplings to Eliza Tibbets, a recent settler in Riverside, California, who had contacts at the agency. Tibbets successfully cultivated the new variety of orange — soon known as navel — in Riverside. The navel orange was the key to the success of the citrus industry in Southern California. Riverside and San Bernardino counties had the right mixture of fertile soil, sunshine, mild winters, and infrastructure to provide irrigation water to grow an abundance of citrus, including lemons and grapefruits. In order to deliver the fruit to a wide market — including as far away as New York City — growers shipped their fruit on the refrigerated railroad cars that crisscrossed the continent by the 1890s. Access to a broader market via railcars had its drawbacks, however, as railroad companies could and often did charge high prices for shipping. In response, citrus growers formed associations to plan the most efficient, cost-effective methods for harvesting, packing, and shipping their fruit.
Directions: Students use any or all of these sentence frames individually or in pairs to describe the primary sources included in this set: “I see people doing ________________. This makes me think California was a good place to settle for these people because _____________.” “One thing that I notice about the land is ______________. This makes me think California was a good place to settle because ____________.” “The photographs are in black and white, and the postcard and crate label are in color. I notice another difference between the photographs and the drawings, which is ____________.”