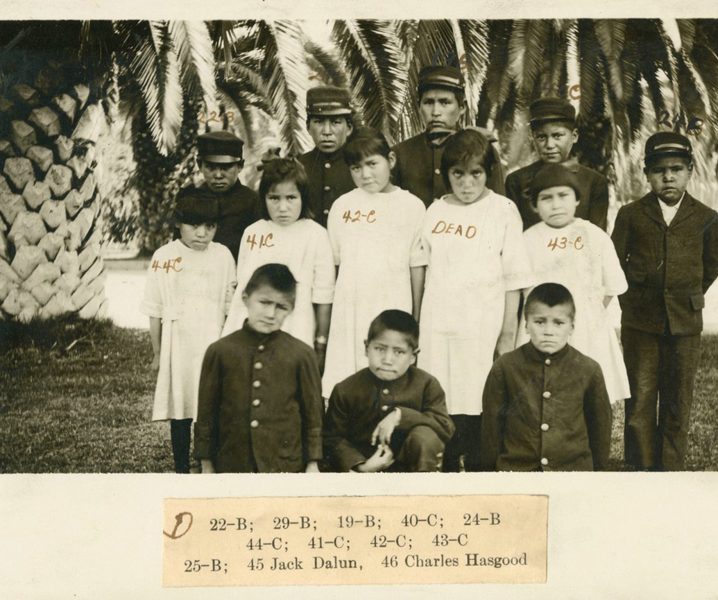 This inquiry set asks students to consider how different levels of government affected Native American children over the course of the twentieth century through a case study on boarding schools. The US government used coercive methods to institutionalize Native American children in boarding schools across the country, in places far from their families and homelands. Children from Indian communities attended schools operated by the Office of Indian Affairs. The OIA later became the Bureau of Indian Affairs (BIA) in the late 1940s.Through firsthand accounts of the leaders and students, this inquiry set allows students to consider the impact boarding schools had on Native Americans, their families and communities, the US military and domestic policy related to Indian tribes, and the history of American education. Students will also reflect on issues of race and ethnic relations.

What level of government is the most important to me — local, state, tribal, or federal?

Teachers can emphasize how power and responsibilities are divided among national, state, local, and tribal governments and ask students to consider this question: Why are powers divided among different levels of government? Students should understand that local governments are established by the states, and tribal governments are recognized by constitutional provisions and federal law. The following questions help students consider the central principles: What are the major responsibilities of the various levels, and what are their revenue sources? What kinds of issues does each level of government handle?

. . . Nevertheless, what happens when there is overlapping jurisdiction? Matters such as education, health care, transportation, and housing often have multiple government agencies regulating and funding them. Students may explore questions such as these: How is public policy made at these various levels? How do regulatory departments and agencies function, and how do state and local regulatory agencies differ from those at the federal level? Students should examine the important realms of law and the courts (for example, criminal justice, family law, environmental protection, and education) that remain largely under state and county control. Finally, students should explore the ways people interact with and influence state government and local government. What level of government is the most important to me — local, state, tribal, or federal?

This inquiry set is a case study that highlights how local, state, tribal, and federal government authority affected children's lives. The topic of education touches all California students and provides us with an example of the ways that government power from a variety of levels intersects, overlaps, and competes to govern our path through K – 12 and beyond. This set offers students an opportunity to consider Native American education, guided by federal Indian policy, which created a system of coerced education in the form of boarding schools. Though Native nations are sovereign, the implementation of this policy beginning in the late nineteenth century created the context of "Indian" students, further marginalizing tribal authority over their own members. Assimilation of Native Americans was a long-standing policy of the US government. Native American students had their culture and language systematically erased by educational institutions, with the goal of replacing these with "American" values and the English language. The sources in this set allow students to consider the goals of the federal government, the consequences of these policies on children, and how Native Americans navigated their relationships between the levels of authority (federal, state, local, and tribal) that they encountered. Many of the sources in this inquiry set focus on the Carlisle Indian Industrial School (CIIS), the first Indian boarding school. CIIS played a significant role in the establishment of other boarding schools located throughout the United States, and it continues to be a site of memory for Native people across the country. Beginning in the late nineteenth century and extending through the mid-twentieth century, school officials removed children from their homes, families, and communities (both by choice and by force). Children attended schools where officials punished them for speaking their native language; banned them from acting in any way that might be seen to represent traditional or cultural practices; stripped them of traditional clothing, hair, and personal belongings; and forced them to abandon behaviors reflective of their native culture. The boarding schools, starting with CIIS and Sherman Institute in Riverside, California — formerly named the Perris Indian School — had an impact on Native American communities throughout the United States. Therefore, these schools are an important part of American and Native American historical discourse. Because of the significant role it played in American and Native American history, CIIS continues to be a major site of memory for many Native people. Source 1 provides the ideological and rhetorical justification for the US government's assimilation strategies. Richard Henry Pratt, the founder of CIIS, emphasized "Kill the Indian in him, and save the man," and this dictum charted the course for the education of Native American children. Source 2 is a telegram from Pratt stating that he "recruited" children from Native leaders. Sources 3, 4, and 5 illustrate the ways the schools attempted to highlight assimilation of Native children over the course of the twentieth century. Students were disciplined, dressed in military and American clothing, and trained to support the elite classes and institutions of American life. Source 6 is "money" or scrip created by the boarding school to "pay" students in lieu of allowing them to keep the money they earned through their labor on and off campus. This source highlights the power that the schools had to control and disrupt the lives of Native Americans who were forced to labor for the schools as part of their education, and it also suggests the ways students were obligated to turn to the school site for resources they needed to subsist. Source 7 provides a student voice that is mediated by the authority of the school through the publication of its newspaper. Source 9 provides a more complex account of student voice through the file of one student, Elizabeth Wind (Ro-nea-we-ia). Source 8 is the Johnson O'Malley Act, enacted in 1934 and updated in 2019; by funding Native students in public schools, this law assisted in the integration of Native students into public schools.
Close reading of student file(s) from the Carlisle Indian Industrial School (CIIS) archive, Source 9. CIIS served as the model for off-reservation boarding schools across the United States and Canada. Operating from 1879 to 1918, the school enrolled over 10,000 students from hundreds of Nations. This close-reading activity will allow students to consider: Who were these students? Where did they come from? How did they come to be enrolled at CIIS? What was the mission of the school and how successful was this "experiment in educating and assimilating Native American young people?" What were the goals of the school and how did this align with government policy? How did it affect students' lives after they left the school? What legacies and lessons remain? The primary documents are sourced from the Carlisle Indian School Digital Resource Center. They include individual student files of members of various Nations who attended the Carlisle Indian Industrial School, the model for boarding schools throughout the United States that were created during an era of assimilation and experiments by the US government to "Kill the Indian in him, and save the man." All available student files can be accessed at: http://carlisleindian.dickinson.edu/student_records The student files selected for this activity are the following: Directions Introduction to Archive and Sources Close reading of the individual student files Example Discussion Questions   Evaluation As an exit ticket, give students a writing assignment based on their experience using the student files for close reading. Ask students to address the following:
It is documented that Native American children suffered physical, sexual, cultural, and spiritual abuse and neglect, and they experienced treatment that in many cases constituted torture (solitary confinement, deprivation of food and water) as punishment for speaking their native languages. Many children never returned home, and their fates have yet to be accounted for by the US government.