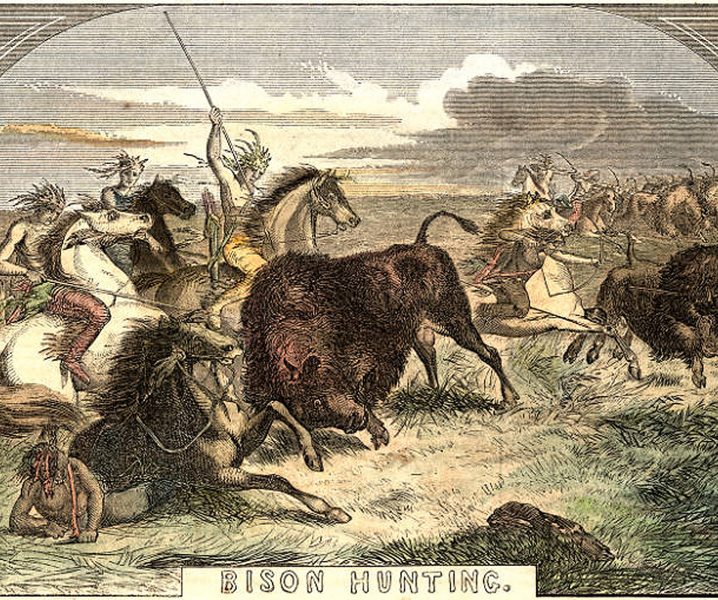 8.4-8.5 US–Native American Relations in the Early Republic, from the Washington Administration Through the Lewis & Clark Expedition

This set examines Native Americans’ resistance to and negotiations with white Americans, as well as the policies and attitudes of US leaders in the decades following the American Revolution. It also considers the Louisiana Purchase (1803) and how the Lewis & Clark Expedition, dispatched to explore that vast territory, approached US–Native American relations in ways both familiar and new.

Students can also learn about the ideals and aspirations of the people of the Early American Republic through a lens of demand for natural resources, a context for understanding the country’s physical landscapes, political divisions, and the resulting pressures that led to territorial expansion. This approach challenges them to consider the complications involved in westward expansion and begin to recognize many consequences of that growth (Principle II of the California Education and the Environment Initiative [EEI]; see appendix G). Territorial expansion and its consequences proved to be an ongoing source of conflict and debate for the new nation. The passage of the Northwest Ordinance established a process for adding new states to the country and placed a limit on the spread of slavery, but this expansion also brought Americans into increased conflict with American Indian nations. The Ordinance stated, “The utmost good faith shall always be observed towards the Indians,” yet students learn that the reality was often very different. Students also examine the economic and social lives of ordinary people in the new nation, including farmers, merchants, laborers, and traders; women; African Americans, both slave and free; and American Indians.

For centuries before the arrival of Europeans on the continent, Native Americans had learned to manage the natural landscape and to negotiate agreements with neighboring peoples to resolve disputes over territory or resources. Yet these Native concepts of territorial rights — and diplomatic procedures — were often poorly understood by Euro-Americans, leading to misunderstanding and conflicts between the two sides. In the Great Lakes region and the Ohio Valley, Native Americans lived by the idea of “the dish with one spoon.” This worldview held that the land should be shared to the common benefit of all its inhabitants. Not only did all people depend upon the natural world for their sustenance and protection, but different Native tribes also needed to find a way to share it amicably. Furthermore, the land was imbued with sacred meaning, or spiritual power — such that its resources should be respected and not abused. Not simply an abstract ideal, “the dish with one spoon” was often invoked in peace negotiations to avert violent conflict. However, as European settlers — and eventually the US government — began making treaties with Native Americans, the Euro-Americans’ long-held conception of private property came into conflict with very different Native conceptions of living on the land, whether their ways of life were as hunter-gatherers or settled horticulturalists.

As the English colonies gained a foothold along the Atlantic seaboard in the seventeenth century, Native Americans suffered from land losses, deadly Old World diseases against which they had no immunity, and a series of armed conflicts with the English in places such as Virginia and New England. In the eighteenth century, Indigenous people played key roles in British–French conflicts and during the Revolutionary War. The Seven Years’ War (or French and Indian War) during the mid-eighteenth century pitted Britain and France against one another worldwide, including in North America; Indian allies proved important for both sides, particularly the French. After Britain prevailed, the 1763 Treaty of Paris ousted France from the North American mainland, transferring vast territories without consulting powerful Native nations who lived on the land. Later, during the Revolutionary War (1775 – 1783), most Native Americans who joined the fighting sided with the British. Indians deemed the British less dangerous than the land-hungry colonists, who were already expanding their territory west of the Appalachian Mountains.

After the Revolution, Britain recognized American independence and granted the United States territorial sovereignty over a vast territory from the Great Lakes south to Florida, and west to the Mississippi River. A glaring omission in the 1783 peace treaty was Native Americans: Britain shunned its erstwhile allies, leaving them to deal with the Americans on their own. Before and during the administration of George Washington, the new United States preferred treaty negotiations over warfare to acquire new Indian lands. However, US officials entered diplomatic councils with Indian leaders in the West with a different mindset than the British before them: with a clear assertion that the US would eventually obtain Indian land between the Appalachians and the Mississippi by virtue of conquest. In 1787, the US passed the Northwest Ordinance under the Articles of Confederation government. In this important piece of legislation, the government pledged to act in the “utmost good faith” in its relations with Native Americans. Yet it also designated the vast area from the Appalachians west to the Mississippi River, and north of the Ohio River, as the Northwest Territory, which would eventually be added to the US as five new states, with Native peoples presumably pushed aside. In response, many Indigenous peoples resisted US encroachments on their lands with force (Sources 1 and 2).

The map linked here depicts the Northwest Territory, as created in 1787, and the five new states that it eventually comprised: https://www.americanhistoryusa.com/static/images/northwest-ordinance-map.jpg

As the United States continued to expand westward, third president Thomas Jefferson made his most significant political and diplomatic achievement with the Louisiana Purchase (1803) from France. This transaction nearly doubled the size of the US by extending it to the Rocky Mountains, at a cost of $15 million, or only 3 cents per acre. The Louisiana Purchase removed a hostile foreign power from the western border of the United States, ensured the nation’s long-term territorial expansion, and opened a new chapter in Native American relations. Jefferson envisioned peaceful coexistence and trade relations with Native Americans in the Louisiana Territory, rather than outright conquest — at least for the foreseeable future. This represented a marked change from earlier US policy east of the Mississippi, which assumed the constant march of white settlement and Indian assimilation or retreat.

In 1803, Jefferson organized the Lewis & Clark Expedition — also commonly known as the Corps of Discovery — under the auspices of the US Army to explore and map the Louisiana Territory, and to establish the US claim to this expansive region. The expedition also had a scientific purpose: Lewis and Clark investigated and cataloged the region’s unfamiliar flora, fauna, climate, and geology (Sources 6, 10, 12). Notably, the Corps of Discovery was also tasked with establishing good diplomatic relations with the diverse Native American inhabitants. They pursued a delicate balance: projecting US sovereignty over the territory and portraying Jefferson as the Indians’ new “Great White Father” in faraway Washington, DC, while also seeking peaceful trade and diplomatic ties (Sources 3 and 4).

The explorers left St. Louis in 1804, spent two winters en route (in North Dakota and near the Pacific coast in Oregon), and returned in 1806. They encountered some 50 Native American tribes — learning about their languages, customs, subsistence, opinions of white Americans, and alliances and conflicts with other groups — and these encounters were by and large amicable (Sources 5 and 8). Lewis and Clark succeeded in establishing diplomatic relations with the diverse Indigenous peoples they met. But in the long run the Corps of Discovery represented the vanguard of US expansion. In the fur trade era that followed (early 1800s – 1830s), American trapping companies explored and trapped in the vast region between the Mississippi and the Rockies and beyond. Subsequent decades (1830s – 1850s) saw the rise of white American overland migration on the Oregon and California trails and other routes west. Then, in the decades after the Civil War, armed conflict and disease ravaged Great Plains Native American cultures as they battled the US Army in a long series of “Indian Wars” and lost the vast buffalo herds on which they had depended; also, Native people were increasingly confined to reservations by the federal government. Yet Native Americans continued to resist as well as adapt to new circumstances.

However, Indians possessed a considerable degree of political and military power during the late eighteenth and into the nineteenth centuries. They would not simply “disappear” or retreat westward as white settlement advanced — a common popular misperception about early US history. Native Americans opposed white encroachment on their land, engaged in diplomacy, acculturated to Euro-American society, and wielded their power in astute ways. This inquiry set interrogates the basic question What was life like in the Early Republic? by examining Native Americans’ resistance to and negotiation with white Americans, as well as the policies and attitudes of US leaders.

1. Although the term “Indian” may seem regressive or dated — or even insensitive — to some Americans today, it is commonly used by historians and by many Native Americans. In this work, “Indian,” “Native American,” and “Native” or “Indigenous” people are used interchangeably. However, the set favors the term “Native American,” as it seems the most accurate and culturally sensitive term. In a sense, the label “Indian” stems from a massive geographical misunderstanding in history. When Columbus first reached the Americas, he believed he had reached Asia (islands on the edge of the Indian Ocean), and labeled the lands in the Caribbean he had found Las Indias (the Indies) and its inhabitants Indians. The Spanish persisted in using the term “Indians” as they colonized the Americas, even after the Western Hemisphere was discovered to be two vast new continents — new, at least, to the Europeans.

2. Thomas Jefferson’s views on Native Americans as seen in these primary-source documents are complex — and by implication, so are those of Meriwether Lewis. These ideas may be difficult for some students to tease out, and may seem racist and insensitive. Although an extremely well-educated person in his time, Jefferson viewed Native Americans as “savages,” yet he also believed in a paternalistic American obligation to “civilize” them if they were willing. Jefferson wrote that Indians were “in body and mind equal to the whiteman”; if they were lesser culturally, they nevertheless had great capacity for improvement. Jefferson was a “Renaissance man” interested in science, geography, and ethnography who respected Indian character and culture, but believed them to be, in the words of one historian, “noble but doomed savages who could not survive the juggernaut of white civilization.” Jefferson believed they must ultimately assimilate into white society as independent farmers, or move westward beyond the Mississippi River.

The Lewis & Clark Expedition was largely Jefferson’s brainchild, and Lewis served as his hand-picked representative in diplomacy with the many Native American cultures west of the Mississippi. Jefferson believed that trade and peaceful coexistence between white Americans and Indians within the Louisiana Purchase — the area Lewis and Clark traversed — was possible, at least for the time being. Thus, there is constant tension in Jefferson’s writings, and in Lewis’s expedition journals, between these ideas: of Native Americans as cultural inferiors who must make way for the advancement of white civilization, and a genuine fascination and respect for their ways of life and knowledge of the natural world. More broadly, this inquiry set does not emphasize the violence, land dispossession, and devastating epidemic diseases that Native Americans faced at the hands of Euro-Americans — simply because this is not the focus of the sources selected. However, these issues certainly may be sensitive topics for readers. (Sources 1, 2, and 11 all come from Native voices, and 1 and 2 are exceptions to this rule.)