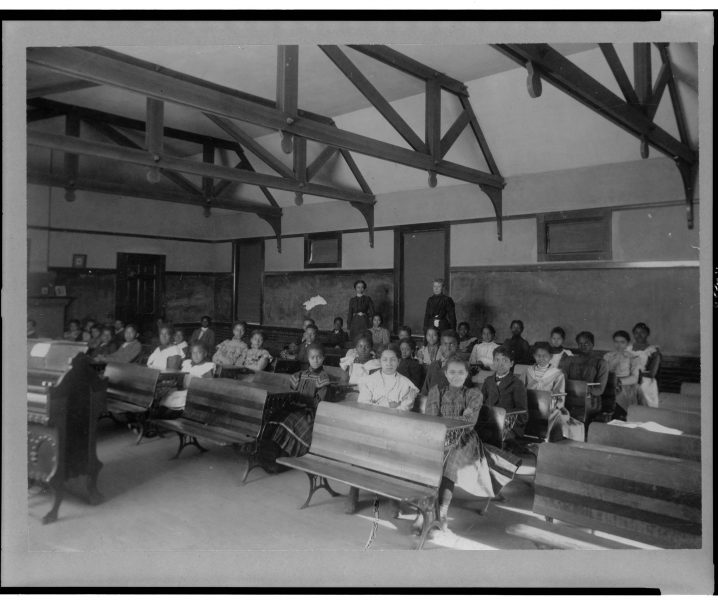 This set examines some of the successes and failures of Reconstruction and covers a time-frame from the end of the Civil War to the early twentieth century.

How did Reconstruction redefine what it meant to be an American?

The Civil War and its immediate aftermath should be treated as a watershed event in American history. It resolved a challenge to the very existence of the nation, demolished the antebellum way of life in the South, and created the prototype of modern warfare. To understand Reconstruction, students consider the economic and social changes that came with the end of slavery and how African Americans attained political freedom and exercised that power within a few years after the war. Students also explore the impact Reconstruction had on African American kinship structures and family life. Students study the postwar struggle for control of the South and the impeachment of President Andrew Johnson. A federal civil rights bill granting full equality to African Americans was followed by adoption of the Thirteenth, Fourteenth, and Fifteenth Amendments.

Between 1865 and 1877, African American citizens, newly organized as Republicans, influenced the direction of Southern politics and elected 22 members of Congress. Republican-dominated legislatures established the first publicly financed education systems in the region, provided debt relief to the poor, and expanded women’s rights. Students examine the effects of Reconstruction in the South by considering the question: How did Reconstruction redefine what it meant to be an American? As important as the era was in expanding civil rights in the South, Reconstruction was temporary.

Students should employ cause-and-effect thinking skills to analyze the consequences of the 1872 Amnesty Act and the fateful election of 1876, followed by the prompt withdrawal of federal troops from the South. The nation experienced significant economic consequences from the Civil War and Reconstruction. Students learn about new laws, including the Morrill Tariff and Land Grant Act, the Transcontinental Railroad Acts, and the Homestead Act, to explore the expanding role that the government would play in developing the nation.
Students analyze how events during and after Reconstruction raised and then dashed hopes that African Americans would achieve full equality. They should understand how, over the next couple of decades, courts and political interests undermined the intent of the Thirteenth, Fourteenth, and Fifteenth Amendments to the Constitution. They learn how slavery was replaced by Black peonage, segregation, Jim Crow laws, and other legal restrictions on the rights of African Americans, capped by the Supreme Court’s Plessy v. Ferguson decision in 1896 (“separate but equal”). Racism prevailed —enforced by lynch mobs, the Ku Klux Klan, popular sentiment, and federal acceptance — which spread outside of the South.

Students need to understand the connection between the Reconstruction-era amendments and the civil rights movement of the 1960s. Although undermined by the courts a century ago, these amendments became the legal basis for all civil rights progress in the twentieth century.

Reconstruction spanned the 12 years following the end of the Civil War. It encompassed a period in which Black Americans strengthened the country’s democracy through a movement for equality with the all too brief support of a Republican federal government working to reunite the country, rebuild an economy devastated by war, and revise the definition of citizenship to include Black Americans. Reconstruction is also a period in which the Democratic Party offered staunch resistance to equality for African Americans.

Not long before his assassination, President Lincoln proudly touted the passage of the Thirteenth Amendment to end slavery. He would not live to help rebuild the country after the devastating war. His successor, Andrew Johnson, prioritized expeditiously reuniting the secession states above equality for Black people. During the Congressional recess of 1865, Johnson proceeded with his own reconstruction plans that allowed former Confederate leaders to reassert power in the re-formed state governments. Once reinstated, they used this power to institute harsh new laws known as “Black codes.” Given the Thirteenth Amendment, these Black codes came as close to slavery as Southern states could impose. Thus began legal and common-law segregation throughout America that would not be dismantled until the civil rights movement a century later.

When Congress reconvened in December of 1865, the majority of Republicans put forward a very different plan for reconstruction that would not restore political power to the same officials under the Confederacy. Republicans refused to acknowledge the legislators sent from the South who were elected under Johnson’s plan, and made states’ reentry into the Union conditioned upon adopting new state constitutions and elections of new state legislators, and later, upon granting Black men voting rights. Meanwhile, racial violence in Southern cities, along with the Black codes, made it clear to Republican legislators that many Southern whites refused to seek equality, or even safety, for their Black neighbors. This sort of intense resistance only reinforced the Republicans’ commitment to using the federal government to enforce rights for Black Americans.

In 1866, Congress passed the Fourteenth Amendment, guaranteeing citizenship to all people born in the United States, with all the rights and privileges associated with citizenship. A sufficient number of states ratified the amendment in 1868, with the reconstructed Confederate states under military rule providing the key margin for passage. Beginning in at least 1864, Blacks and sympathetic whites argued for the importance of Black suffrage in keeping with the United States’ democratic ideals. In 1869, Congress passed the Fifteenth Amendment to extend suffrage to Black men (the amendment was ratified in 1870). The years of Reconstruction also saw the establishment of the Freedmen's Bureau to provide assistance with such critical measures as employment, land acquisition, family reunification, and education. In order to enforce these basic Constitutional rights, the federal government established military districts throughout the former Confederacy due to extreme white resistance and violence. In addition, the Ku Klux Klan Act of 1871 prohibited white supremist organizations that sought to undermine realization of the Fourteenth Amendment. While federal protection was in place, Black Americans used their knowledge and skills to achieve remarkable successes, including a number of seats in local, state, and federal offices. In no other place in the world had people moved from slavery to become federal legislators in the course of only ten years. Black Americans established schools, churches, and businesses, as well as acquired land, all in pursuit of freedom. By enforcing the principles upon which the nation was founded, the Reconstruction era revitalized American democracy.

Not all of these new freedoms lasted for Black Americans, however. As W.E.B. Du Bois famously wrote, Reconstruction was a “splendid failure.” It failed not because Black people were ill equipped for independence, but because the gains made during this period only seemed to heighten resistance to Black progress. Continued opposition among white Southerners and also among some white Northerners to equality for all, as well as a growing concern among some Republicans about the financial costs of Reconstruction and the hindrance on states’ rights that Reconstruction imposed on the South, all contributed to the end of the Reconstruction effort. In its 1876 decision in U.S. v. Cruikshank, the Supreme Court weakened the protections afforded by the Fourteenth Amendment and exhibited yet another retreat from the goals of Reconstruction. In the 1876 election, candidates from both parties ran on a platform to end Reconstruction. In the Compromise of 1876, when legislators fiercely debated the presidential election results, the Democrats accepted Republican Rutherford B. Hayes as the victor in exchange for the end of federal protections of the freedmen in the South. As a result, after 1876 many states took advantage of the lack of federal enforcement to deny basic rights such as voting as well as equal opportunities in regards to education, employment, housing, and more. Such unofficial “Jim Crow” laws held for a full century until the “Second Reconstruction.” A morally compelling civil rights movement, accompanied by such vital laws as the Civil Rights Act of 1964 and the Voting Rights Act of 1965, eventually brought the country closer to its claims of equality for all.

This excerpt is from a speech Republican Senator Lyman Trumbull of Illinois delivered to the Senate in January of 1866, in which he argued to extend the life of the Freedmen's Bureau. It might be challenging for many students due to its heavy use of pronouns and Trumbull’s back and forth references to multiple parties (primarily to recently freed Black Americans, white Southerners who owned slaves, the US government in general, and senators who oppose Trumbull on this issue). This literacy strategy, then, is designed to help students work through these pronouns to clarify what details Trumbull provides about each group, and, ultimately, to reflect on how Trumbull strategically represents each group to make his case for continued Freedmen's Bureau funding.

This set examines violent events in which white Americans perpetrated egregious crimes against Black Americans. These violent events showed the challenges and failures of Reconstruction in protecting Black lives. This set also contains examples of successes for African Americans in the realms of politics, education, and more. It will be helpful to explain to students that there has been substantial party realignment since the Reconstruction period. For decades after the Civil War, African Americans tended to vote Republican because this was the party of Lincoln and the Emancipation Proclamation. Democratic President Franklin Roosevelt’s New Deal coalition in the 1930s and ’40s expanded rights and opportunities for African Americans and attracted many to the Democratic Party. The Civil Rights legislation under Democratic President Lyndon Johnson further cemented the African American alignment with the Democratic Party.