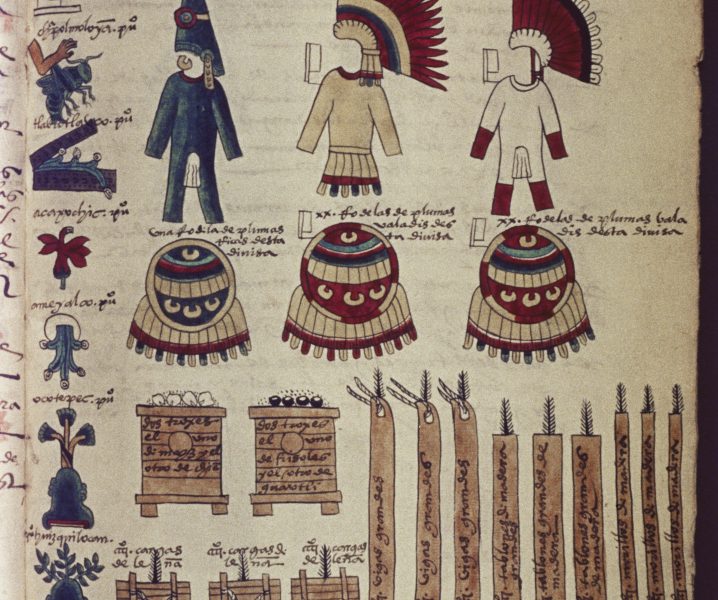 7.7 Tenochtitlán as a Site of Encounter

Tenochtitlán was a site of encounter because. as the capital of the Aztec Empire, it was a center of political and military power. The Aztecs required conquered city-states to pay tribute periodically to Tenochtitlán. Receipt of this tribute enriched the Aztec state and stimulated markets in Tenochtitlán. The Aztec ruler and state officials engaged in diplomacy with rulers and important foreigners. In this source set, students explore these factors to see that Tenochtitlán and the Aztec Empire had many of the same power dynamics and social systems as Afroeurasian capitals and empires, even though the Aztecs expressed these in very different ways.

Under the Aztecs, why was Tenochtitlán a site of encounter?

Students also study the question: Under the Aztecs, why was Tenochtitlán a site of encounter? This is the first part of their study, as they will return to "Mexico City" as a site of encounter in the Global Convergence unit. Tenochtitlán was built on an island in Lake Texcoco, with three causeways linking it to the mainland. The city was built in circles, with temples and government buildings in an inner square, houses in the outer circles, and floating garden beds on the lake around the city. It was one of the largest cities in the world at that time. Its markets contained vast amounts of a variety of goods from all over Mesoamerica.

Tenochtitlán was a site of encounter for several reasons. As the capital of the Aztec Empire, it was a center of political and military power. The Aztec Empire was organized by conquest, marriage alliances with other city-states, and the extracting of tribute. The Aztecs were latecomers to an area — the Valley of Mexico — occupied by many different peoples who were organized into city-states. By successful warfare, the Aztecs conquered or made marriage alliances with most of these city-states, and then expanded by conquering city-states and other groups in Mesoamerica. The Aztecs usually let the city-states and conquered peoples govern themselves but required them to pay tribute, to be sent periodically to Tenochtitlán. Receipt of this tribute enriched the Aztec state, which used it to build a splendid capital city. The circulation of tribute also stimulated markets in Tenochtitlán and attracted people from all over Mesoamerica to visit the city. Although the Aztecs relied upon warfare, the Aztec ruler and state officials engaged in diplomacy with rulers and important foreigners. In this inquiry set, students explore these factors to see that Tenochtitlán and the Aztec Empire had many of the same power dynamics and social systems as Afroeurasian capitals and empires, even though the Aztecs expressed these in very different ways.

One of the significant issues this set engages concerns the nature of the primary sources, which were all produced in the colonial period rather than during the Aztec Empire, even though some were created by Indigenous people and some by the Spanish. After they lost the Valley of Mexico to the Spanish under Cortés, Aztec writers continued to create codices and write in the Nahuatl language about their history, Tenochtitlán, and the loss of their previous way of life. However, these Nahua authors were writing about things that they had lost and missed bitterly, not about the confident power of an empire at its height. This set gives students the opportunity to consider the importance of historical context and perspective and its effect on a source. They must also grapple with the fact that there are no similar sources for the Aztec period, so they must decide which evidence they can cite, and with what conditions.

The first reason that Tenochtitlán was a site of encounter is that it was an imperial capital. In similar ways to Rome and Baghdad, Tenochtitlán attracted people. The Aztecs founded the city of Tenochtitlán in 1325 when they encountered a symbol foretold in their ancient prophecies. After leaving their legendary homeland to the north, the Aztecs (also known as the Mexica) journeyed south in search of an eagle devouring a serpent on a cactus growing from a rock (Source 1). On the island in the middle of Lake Texcoco, where the Mexica discovered this sign, emerged the capital of the empire (Source 2).

However, this land was not empty when the Aztecs arrived. The lake region in the Valley of Mexico was densely populated. The Aztecs couldn't find a place to settle except for a swampy island in Lake Texcoco that no one wanted. The Aztecs drained some of the water to make firm land, built canals, and made the island inhabitable and defensible. The Aztecs began interacting with neighboring Indigenous peoples in the Valley of Mexico and beyond. They conquered and annexed more than 20 neighboring city-states and created a network of vassal states from the Gulf of Mexico to the Pacific Ocean. In that land, however, there were states that maintained independence. This resulted in the Aztec Empire resembling a patchwork quilt instead of a continuously woven blanket. One important city-state that challenged the Mexica was Tlaxcala (Source 8). Aztec conquests and success in war created animosity and resentment among other city-states and groups of people. On the other hand, people from many different ethnic groups and lands met in Tenochtitlán.

Secondly, the Aztec style of rule drew wealth and people into its capital city. The Aztecs did not directly govern conquered areas. After they won battles, they required the defeated city-states to pay tribute to Tenochtitlán. The exact tribute owed was based on the goods produced or acquired in specific regions (Sources 5 and 6). This annual tribute provided exotic wares for the markets of Tenochtitlán and secured a variety of products for the capital's merchants. Cortés's awed description of the city's central market, written shortly after the conquest, testifies to the fact that Aztec Tenochtitlán was a center of trade and commercial activity (Source 4). Many people drawn into the city never left. This source set does not include any sources about human sacrifice, because that aspect of the Aztecs is so well known. However, this was also a factor that drew people to the city, which was a very important religious and ceremonial center.

In addition, the Aztecs used the wealth acquired from collection of tribute to build a grand and spectacular capital city. Tenochtitlán was one of the largest cities in the world at the time. It was spatially organized into four quarters that radiated from a central temple complex centered on the Twin Temples (Sources 2 and 3). The Aztecs built a city that maximized use of its site on a muddy island in a shallow lake with a transportation system of roads and canals, aqueducts to bring in fresh water, and chinampas (floating garden plots) to feed its people.

Finally, although the Aztecs are better known for their prowess in warfare, they also practiced diplomacy. When Hernán Cortés first arrived in Tenochtitlán, the Aztec ruler Moctezuma II went out to meet him on the causeway. As an Aztec account relates, Moctezuma presented gifts to the Spanish conquistador (Sources 7 and 8). Although the actual gifts were different, gift-giving and other practices of diplomacy were common to both Aztec and Afroeurasian cultures.

The letter Cortés wrote to Charles V can be challenging for many students due to (1) its use of many words potentially unfamiliar to students and (2) its heavy use of a variety of pronoun types and other reference devices to embed multiple layers of details into the text. This literacy activity first guides students through an initial reading of the text with a glossary to help with difficult vocabulary. It then turns to a text analysis activity in which students work to connect pronouns to their antecedents using a version of the text that has been broken apart to more clearly show its hierarchical structure and how the many details relate to one another. Students will use this enhanced understanding of the details in the text to summarize the main ideas of each paragraph and select key details to support these main ideas. They will then use this summary to complete the final step: reflecting on Cortés's purpose in writing the letter and connecting it to bigger unit ideas.

There are two issues that could potentially raise small issues in the classroom. First, many students in California have family roots in Mexico and so might have strong feelings about the Aztecs, Cortés, and the Spanish. They could have strong feelings about portrayals of these two cultures as good and evil. This can make it difficult for them to maintain objectivity, and to separate what they learn about the Aztecs before the conquest from what happened during the conquest. The second issue is human sacrifice, which tends to dominate popular culture's image of the Aztecs. This inquiry set deliberately focuses on other aspects of Aztec culture, in an effort to make coverage of the topic more balanced. We recommend that teachers discuss the ritual practice of human sacrifice and explain the religious beliefs that supported it, but not let that one practice dominate coverage of this topic.