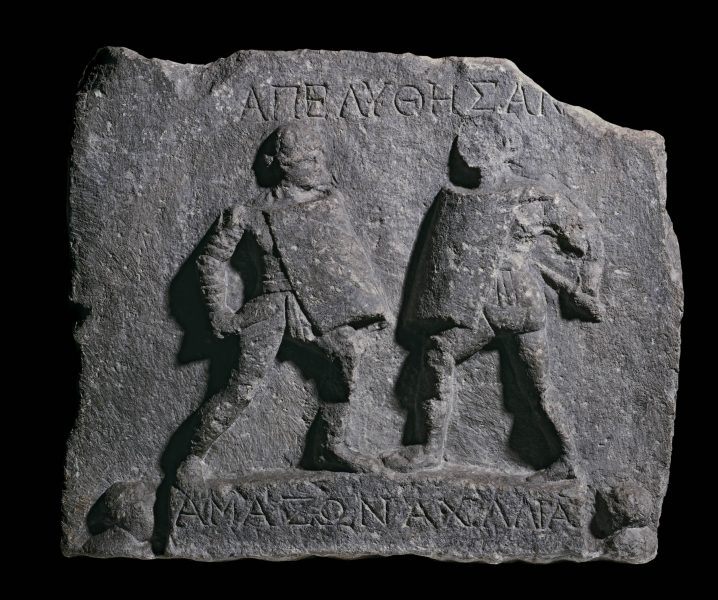 7.2 Bread and Circuses: Rome as a Site of Encounter

This set examines the city of Rome, the center of the Roman Empire from 100 BCE through 200 CE, as a site of encounter, where people from multiple cultures met, interacted, and exchanged products, ideas, and technologies. To spark student interest, most of the sources in the set are related to gladiatorial games and other public entertainments such as chariot racing and theater. Students investigate how Rome generated a mix of people, products, and ideas and simultaneously distributed them throughout the empire and beyond.

How was Rome a site of encounter?

The teacher does not review the Roman Republic, but begins with the Roman Empire at its height, with the question: How was Rome a site of encounter? A site of encounter is a place where people of different cultures meet and exchange products, ideas, and technologies. At the site of encounter, new products, ideas, and technologies are often created because of the exchange. Rome was a multicultural empire. Romans spoke Latin, but they conquered Egyptians, Greeks, Syrians, Jews, Celts and Gauls, people who spoke Greek, Aramaic, Hebrew, and hundreds of other languages, and followed dozens of religions. Roman emperors built up the city of Rome to bring together the best from their empire and the world. Through studying Rome as a site of encounter, students explore the character and contributions of Roman civilization at its height. Residents benefited from sophisticated art, architecture, and engineering. For example, the Romans constructed huge aqueducts to bring water to cities from many miles away. Imports of grain and olive oil fed the city of between one and two million people at its height. The city featured a Colosseum for gladiatorial contests, a race track, theaters, baths (for both bathing and socializing), and elegant forums with markets and law courts. Many great thinkers and writers, such as Pliny the Elder, Juvenal, Plutarch, and Virgil (or Vergil), lived and wrote during the Roman Peace (Pax Romana), the two centuries of prosperity that began with the reign of Augustus Caesar (27 BCE – 14 CE). However, this prosperity was based on riches from conquest and slave labor on large agricultural estates that provided food and luxuries for the cities. Wealthy Romans also purchased luxuries, such as silk from China, medicines and jewels from India, and animals from sub-Saharan Africa, brought into the empire by merchants on the Silk Road and other Afroeurasian trade routes.

“Bread and circuses” is the common English translation of a comment attributed to Juvenal, a Roman satirist, around 100 CE. He used the phrase to criticize the superficiality of the common people in the city, who allowed the Roman government to placate them with cheap grain, games, and other public entertainment, distracting them from caring about larger political issues. Under the emperors, the ideals of Rome changed. While under the republic, Roman people played a role in political life by electing their officials and voting, but they did not participate in government under the emperors. Although writers often use the phrase to point out serious flaws in political systems, this source set uses it to investigate Rome as a site of encounter through two important aspects of life in imperial Rome, the food supply and public entertainment. Students engage in an inquiry into Rome’s role as the center of an empire and its connections to other societies, both those within the empire that the Romans had conquered and in societies beyond the edges of the empire. We encourage teachers to add visuals, videos, and activities to this source set. These should be identified as secondary sources unless they were actually made from 100 BCE to 400 CE. Taking advantage of the remarkable breadth of types of evidence that survive from the Roman Empire, the set features a wide range of sources from many different perspectives.

Because this unit comes early in the year, we advise teachers to focus on introducing the concepts of historical thinking, particularly sourcing and how historians use evidence to arrive at interpretations. The secondary information for students that goes with each source focuses on the ways historians use this type of source to find evidence. The teacher should use a sourcing tool that has students identify the author/creator, their perspective, date of creation, intended audience, and purpose. Helping students to understand the perspectives and intended audiences of the sources will encourage students to be more interpretive. The teacher might make a chart to collect evidence from all the sources and begin to analyze that evidence to answer the investigative question.

Rome was the center of a large, multicultural empire. As the center of government and power over the entire empire, the city attracted products, people, and ideas from its empire and beyond. It was also a model for the kind of sophisticated urban-based culture that the Romans offered to (obedient) elite groups in the lands they conquered. After Augustus, total power over the empire was in the hands of one man, who soon came to be called the emperor (Source 2). At its height Rome had more than one million residents. This was far more people than could be fed by the surrounding countryside; the city depended on frequent imports of grain and olive oil from huge plantations in North Africa and elsewhere (Sources 3 and 4). The cities of the Roman Empire became dependent on an interdependent network of ships transporting basic food items around the Mediterranean.

Romans brought home treasures from the areas they conquered and used their wealth to build a truly public showplace of the city. Rome was equipped with 11 aqueducts, a sewer system, paved roads, temples, baths, theaters, sports arenas, forums, and other public spaces. The Romans also brought home and attracted people from Egypt, Greece, Anatolia, North Africa, Gaul, and Syria. They brought with them diverse religions, ideas, languages, and cultures. In Rome, people spoke many languages and followed multiple religions. Sources 5, 6, and 7 are connected to the gladiatorial games, and Source 8 to chariot racing. Students will likely be confused initially because the content of the sources seems to have so little to do with trade or people from different cultures. However, they will learn and practice the skill of noticing what piece of evidence within a source actually applies to their question, when the source has an entirely different purpose.

There was also considerable import of luxury products and spices from the east. The Romans wore silk and knew vaguely of the existence of China; Roman merchants visited India and imported pepper, cotton clothing, medicine, and jewels from the subcontinent (Sources 9 and 10). However, the bulk of the imports came into Rome from trade routes passing through Central Asia and Persia or through the Red Sea and terminating at trade cities such as Palmyra and Alexandria. Sources 11 and 12 introduce evidence about slaves, because their existence was so central to the economy of the empire.

Part I, A. Collaborative

1. Exchange information and ideas with others through oral collaborative discussions on a range of social and academic topics.

6. Read closely literary and informational texts and viewing multimedia to determine how meaning is conveyed explicitly and implicitly through language.

8. Analyze how writers and speakers use vocabulary and other language resources for specific purposes (to explain, persuade, entertain, etc. ) depending on modality, text type, purpose, audience, topic and content area.

Teacher Background: Aelius Aristides was an orator determined to please an audience of intellectual Romans who admired flowery rhetoric. This purpose makes the text difficult for modern students to understand. Since the style of the panegyric, or speech of praise, has gone out of fashion, students will have no comparable modern model, except perhaps funeral eulogies. Another challenge is that Aristides used many referrers, especially for Rome itself, which may be confusing for students. In order for students to comprehend the meaning of this text and analyze it successfully, this literacy strategy helps them identify the referrers and substitutions for Rome and the words and phrases that describe Rome. For historical analysis, it identifies the locations mentioned in the text. Then students use the knowledge gained from the text to describe to another student what Rome looked like. This gives them a chance to practice using academic and historical vocabulary and paraphrasing cited evidence in the oral mode.

7.2 Rome as a Site of Encounter Student Handout

7.2 Rome as a Site of Encounter Teacher Key