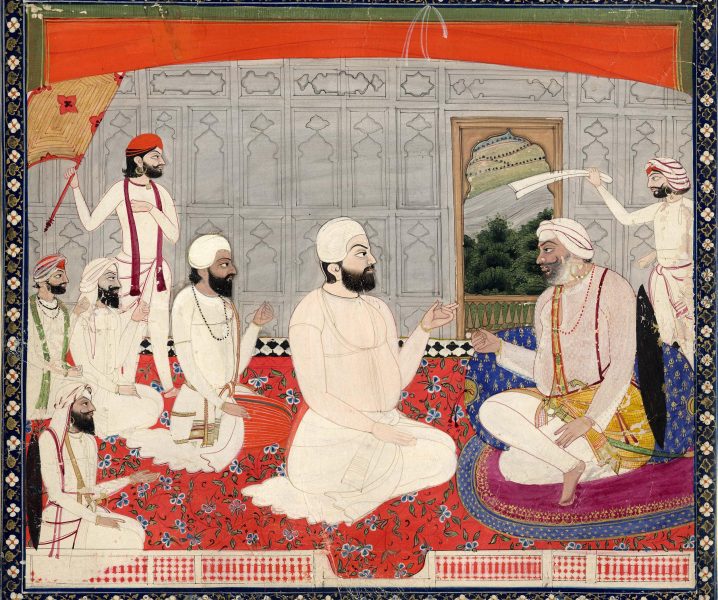 This inquiry set focuses on the beliefs and practices of Sikhism, the youngest and fifth largest world religion, with special attention to two moments: the establishment of Sikhism under Guru Nanak in the fifteenth century and the transformation of Sikhism under Guru Gobind Singh in the late seventeenth century. Students explore how the historical context in South Asia at these two moments influenced the religion to emerge and change.

Students now turn to the question: How did world religions change and spread during the early modern period? The expansion of global communications facilitated the further expansion of major world religions, notably Christianity in the Americas and Southeast Asia, Islam around the Indian Ocean rim, and Theravada Buddhism from Sri Lanka to Southeast Asia. The Christian reformation played a significant role in motivating colonization of the Americas. European missionaries, especially Catholic missionary orders, spread reformed Christianity in Africa and Asia during the early modern period. A new world religion, Sikhism, was founded in 1469 in South Asia. Sikhism was founded by Guru Nanak, a social reformer who challenged the authority of the Brahmins and the caste order. Students learn about the Sikh Scripture (Guru Granth Sahib), articles of faith, the turban, and Sikh history. Guru Nanak taught that all human beings are equal and can realize the divine within them without any human intermediaries or priests. Sikhs believe that each individual can realize the divine on his or her own through devotion to God, truthful living, and service to humanity. The three basic principles of Sikhism are honest living, sharing with the needy, and praying to one God. With the addition of Sikhism, there were now four major religions of indigenous origin. While relations between people of different religions were often peaceful, generally, most Muslim rulers persecuted Sikhs as well as Hindus and Jains. Other Mughal rulers, most notably Akbar, encouraged and accelerated the blending of Hindu and Islamic beliefs as well as architectural and artistic forms.

Throughout the year, the focus in the study of religion has been change over time. This inquiry set allows students to continue to investigate that theme. There are two major moments studied in this set: the founding of Sikhism in the fifteenth century by Guru Nanak and the creation of the Khalsa (an egalitarian community of fully initiated Sikhs) in 1699 by the final living Guru, Guru Gobind Singh. In both cases, the changes and the historical context surrounding the changes are highlighted. Sikhism was founded in Punjab, the northwestern region of South Asia, by Guru Nanak, who lived from 1469 until 1539. During this time, the Punjab region was a site of encounter because it was a frontier region in which numerous cultures, languages, and religions took root amid the long-standing trade and movement of peoples, ideas, and languages. During Guru Nanak’s lifetime, the Mughal Empire was established in South Asia, and his insights drew from multiple faiths. In this Punjabi site of encounter there were lots of exchanges, conversations, and conflicts between religious groups at this time. Popular devotional movements featuring the devotional poetry of bhakti in the Hindu tradition and Sufi mysticism in the Muslim tradition not only inspired and spread religious devotion but also challenged the authority of the Hindu brahmans and Muslim religious leaders. In this fertile exchange of religious ideas, writings, and practices, Guru Nanak emphasized three concepts that formed the basis of the Sikh faith: praying to one God, honest living, and sharing with the needy. He stressed the single nature of God, who transcended human understanding. He was a champion of human rights, asserting the equality of all human beings and challenging the hierarchies of gender, caste, and religion. In his epiphany “There is neither Hindu nor Muslim” (Source 3), Guru Nanak revealed that what is important is devotion to the divine (Waheguru) and love for humanity rather than empty rituals and religious labels. He encouraged the pursuit of divinity from within and through poetry and hymns (Source 1). Guru Nanak wrote hymns and mystical poetry to aid believers in meditating on the Nam (remembering the divine) and the word of God, which would be revealed to Sikhs by the Guru. His sacred hymns (shabad kirtans) were a major factor in the central role of devotional music to Sikhism. Guru Nanak created vital institutions, such as the Gurdwara (the Sikh house of worship), which is open to anyone in need of spirituality, refuge, and a free meal, regardless of social status or religion. All Gurdwaras include a community kitchen that provides free meals to anyone in need.

Followers of Guru Nanak organized into communities of faith in the sixteenth and seventeenth centuries. These communities followed a succession of Gurus (the ten Gurus of Sikhism) beginning with the founder, Guru Nanak, and ending with the tenth living Guru, Gobind Singh (Source 2). For Sikhs, after Guru Gobind Singh’s martyrdom in 1708, the Guruship passed to the Sikh community and the holy scriptures were called the Guru Granth Sahib. Sikhs consider this to be the eternal living Guru (Sources 1 and 4). The Guru Granth Sahib is an interfaith scripture encompassing a compilation of works by 36 contributors, including the Sikh Gurus, devotional poets, and devotees.

In the late seventeenth century, Sikhism changed some of its structure and practices, while retaining its core beliefs and many of its institutions. Over the course of the seventeenth century, the Sikh community experienced increasing persecution by the Mughal Empire, which viewed Sikhs as a threat to their power. Mughal rulers martyred three Sikh Gurus, Guru Arjan, Guru Tegh Bahadur, and Guru Gobind Singh. To escape persecution, many Sikhs withdrew into the Himalaya foothills, where they sometimes fought local Hindu rulers as well. Guru Gobind Singh began to prepare the Sikhs to defend themselves against enemies and persecutors (Source 5). In 1699, he profoundly transformed the Sikh faith and community by creating the Khalsa, fully initiated, pure Sikhs who form a community of egalitarian brothers and sisters. Sikhs trace the birth of their religious rituals, prayers, dress codes, and names to this creation. Guru Gobind Singh introduced an initiation ceremony in which followers take sacred nectar and pledge their dedication to following the path of greater spirituality and more responsibility for sacrifice and defense against injustice. Sikhs who are fully initiated follow five articles of faith known as the “five Ks,” including keeping their hair (kesh) uncut and carrying a sword (kirpan) to defend themselves and others. The formation of the Khalsa enhanced the distinct religious and cultural identity of Sikhs.

In the eighteenth century, Sikhism grew in practice and popularity, especially in the Punjab region. Sikhs began rising through social and political ranks and holding important local positions (Source 6). By 1799 — centuries after Guru Nanak’s death — the Punjab region had become an independent a Sikh kingdom founded by Maharaja Ranjit Singh, who was able to expand his power because the Mughal Empire had become much weaker (Source 7). During his reign (1792 – 1839), the Sikh kingdom experienced a period of cultural innovation that gave rise to particular artistic forms (Source 3). After Ranjit Singh died, however, his successors faced a new opponent, the British, who were expanding their colonial control over the Mughal Empire and other parts of South Asia. After brutally fought battles, the British defeated the Sikh kingdom in the 1840s, but Sikh religious communities and political leaders have remained important in South Asia.

This particular excerpt from the Guru Granth Sahib refers to various other religious traditions, especially those of Islam and Hinduism, to suggest that prescriptive rituals and status are unnecessary to finding salvation in Sikhism. While students may be expected to have some familiarity with the religious vocabulary and traditions mentioned, they will likely benefit from the structured review of them that this literacy activity offers. In the activity, students will first review some more general high-frequency vocabulary words in the passage and will then use a range of resources to unpack the religious vocabulary and references. Finally, students will examine the full text excerpt and answer questions that will lead to an understanding of its overall message.

Teaching about religion is always sensitive because of the variety of beliefs that students (and their parents) have. Because Sikhism emerged in a multi-religious context, some of the sources in this set contain statements that are critical of Hinduism and Islam. Keep in mind the following three pieces of advice as you teach this set. First, if you have not done so earlier in the year, discuss with students the difference between studying religion in a temple, mosque, or church and studying religion in history class. The goal of history class is to study what people believed in the past — in this case, from the fifteenth to the nineteenth centuries, not what people believe today. All religious ideas have to be treated with respect. We recommend establishing this idea with your students early in the year and repeating it to them every time you start to learn about a religion. A second point to keep in mind is that as long as you are teaching about the religion in the historical context, you are constitutionally protected. In addition, the explanations of Sikh beliefs and the emergence of Sikhism in the framework are the product of thorough public comment and negotiation, have been accepted by the California Department of Education, and are imbued with state authority. This set is consistent with the framework. Finally, if students make statements that certain beliefs are right or wrong, or if they criticize the sources using evidence or opinion related to religions today, remind them that these are words of people in the past and that multiple perspectives are important.