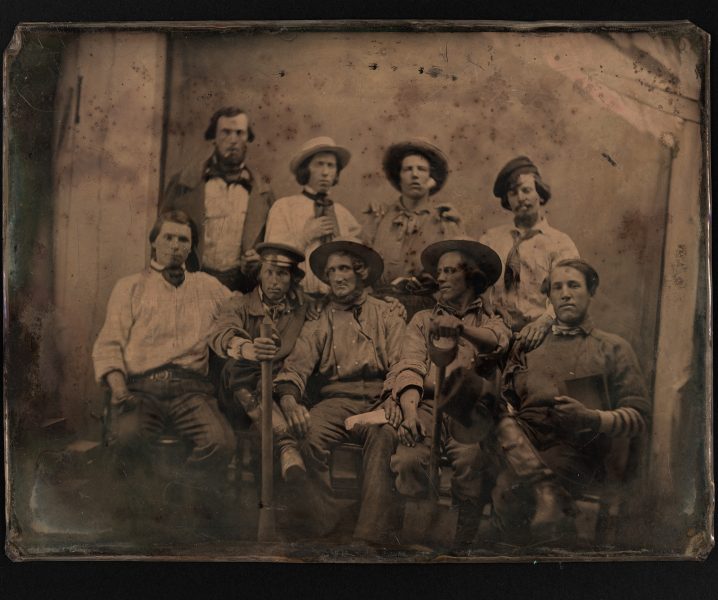 7.1 San Francisco as a Site of Encounter in the Gold Rush Era

Using the example of San Francisco during the Gold Rush, this set introduces students to the concept of sites of encounter.

How was San Francisco a site of encounter?

Themes and large questions offer cohesion to the world history course, but students also need to investigate sources in depth. For this, a useful concept is the site of encounter, a place where people from different cultures meet and exchange products, ideas, and technologies. A site of encounter is a specific place, such as Sicily, Quanzhou, or Tenochtitlán/Mexico City, and students analyze concrete objects, such as a porcelain vase or the image of a saint, exchanged or made at the site. As students investigate the exchanges that took place and the interactions of merchants, bureaucrats, soldiers, and artisans at the site, they learn to consider not only what was happening in one culture but also how cultures influenced each other…. At the site of encounter, new products, ideas, and technologies are often created because of the exchange.

As described in the HSS Framework excerpt, at a site of encounter, there are movements of people and a variety of interactions that can be analyzed through concrete objects. Sites of encounter attract people from different cultures because they are centers for trade, crucial geographical locations for expansion or defense, or the locations of desired commodities. Interactions between cultures at the site of encounter happen in different ways. While trade is a frequent response, war and conquest are also common. Different groups often compete with each other, and one group usually holds more power than any of the others, because its members control the government, land, and/or economic resources. However, there are also exchanges of products, ideas, and technologies at the site. The circulation of different ideas leads to synthesis — the invention of new products, technologies, and ideas. Objects are a useful tool to help students understand the difficult concept of synthesis. This source set is designed to introduce students to the concept of a site of encounter through a familiar example: the city of San Francisco during the Gold Rush. The set also offers a model for teachers to use for their own communities in the present day or at some time in the past to introduce this concept. First, students investigate why San Francisco became a site of encounter. This includes both the geographical factors that made the site an ideal spot for a port (Source 1) and the impact of the discovery of gold. After news of the discovery of gold on the American River, many people dropped everything and rushed to the Sierra to get rich. Those who were already in or near California went on foot to the gold fields. For those who were farther away, the fastest route was by ship to Yerba Buena, now renamed San Francisco, and then by foot to the gold fields. San Francisco was thus both a transit point and a supply depot for people passing through. Second, students examine evidence of the different groups of people and their places of origin. The basis of a site of encounter is that there are exchanges of people, products, and ideas. In Gold Rush era San Francisco, people from multiple cultures were either passing through or settling in the city, merchants imported and sold goods and exported gold, and people exchanged ideas about how to mine gold and how to survive in the gold fields. The gold hunters were overwhelmingly male, so much so that in 1850, among non-Native Americans, only 1 in 12 was a woman. Sources 2 through 4 show just a little of the incredible diversity of peoples who came from China, Hawaii, South America, Europe, the eastern United States, and Australia. The non-Native population of California grew from less than 15,000 in 1848 to more than 220,000 in 1852. These exchanges produced effects. People coming in from other lands soon outnumbered Californios and Native Americans. While Indians, Chinese, and other people of color also panned for gold, white miners often drove them from a profitable claim. Domination by white North American and European men grew so intense that groups of white men hunted down and slaughtered Native Americans, voted for discriminatory laws against the Chinese, and seized lands belonging to Californios. The power dynamic in the city of San Francisco and the new state of California shifted significantly. Most of the miners did not strike it rich. Most of the gold wealth went to merchants and suppliers in San Francisco and elsewhere. Within a few years, large-scale hydraulic mining, requiring huge capital investment, was the only profitable way to find gold. Another effect was that San Francisco grew from a transit and supply point (Source 5) into an established city. Numerous ethnic and religious communities established neighborhood communities in the city, such as Chinatown, which supported its own newspaper (Source 6) and Buddhist temple.
In this short excerpt, the inventor of wire rope (cable), Andrew Hallidie, describes why he adapted his invention to haul tram cars up the hills of San Francisco. The text poses several challenges for the reader because of the elaborate and somewhat archaic language he uses and the length of the sentences. Another challenge is the use of passive voice and participial phrases in descriptive passages, which obscure agency and confuse students. Hallidie organizes this section into a cause-and-effect text pattern. The following chart will help students extract meaning from the passage. In addition, a vocabulary list will help define difficult words. Directions 1. Read aloud and discuss with students the “For the Student” secondary introduction. Draw their attention to the question, How did Andrew Hallidie get the idea to use wire rope (cables) on street railways (trams)? 2. Organize students in small groups or pairs. Have them fill in the blanks in the middle column. If the blanks are enclosed in parentheses, the students should write down what the preceding phrase refers to. If the blank has no parentheses, students should write down the missing words from the text. 3. Having students share out answers, discuss with them vocabulary, meaning, and the arrows that show the cause-and-effect relationships. Ask them how an effect can become a cause, using the text as an example. Point out the boldfaced signal words. Tell them that historians often use a cause-and-effect text structure, and when students see these words, students should expect a cause-and-effect structure. 4. Have student pairs answer the questions in column 3 and write an answer to the reading question. 5. Review as a class. Connect the reading question to the investigative question, How was San Francisco during the Gold Rush a site of encounter? Remind students that people create new technologies at sites of encounter because of the synthesis of cultures. Andrew Hallidie brought his engineering skills from Great Britain and developed a new technology — wire rope — for gold mining and cable cars.   Handouts 7.1 San Francisco as a Site of Encounter Student Handout 7.1 San Francisco as a Site of Encounter Teacher Handout

7.9a The Virgin of Guadalupe