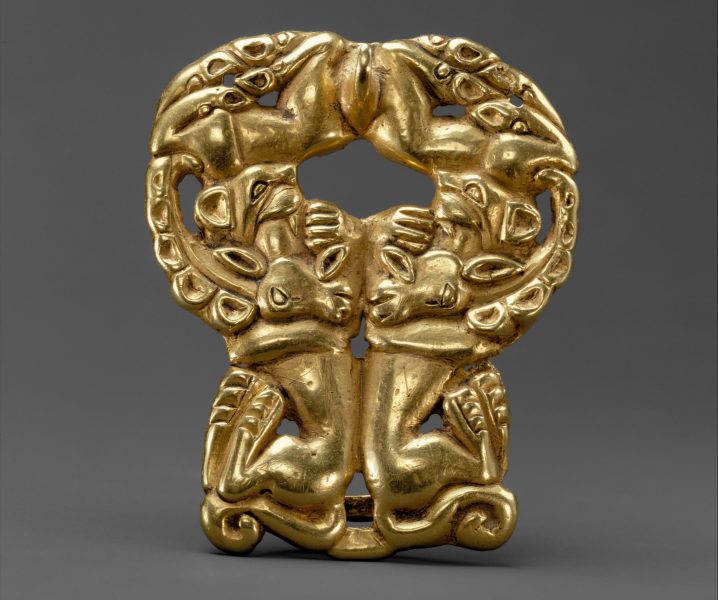 In this set students analyze primary sources as evidence of three important aspects of the Silk Roads during the earliest years of their operation, from approximately 50 BCE to 500 CE: the existence of multiple roads, particularly the sea route; the formation of the overland Silk Road from the conflict between the Han dynasty and the Xiongnu; and the transmission of Buddhism to China.

How did the establishment of the Silk Road increase trade, the spread of Buddhism, and the connections between China and other regions of Afroeurasia?

The Han Dynasty also established important connections with other cultures, as students investigate with the question: How did the establishment of the Silk Road increase trade, the spread of Buddhism, and the connections between China and other regions of Afroeurasia? The spread of the Han empire to the north and west and concern about nomadic raiders led them to seek contact with societies to the west. At the end of the second century BCE, the Han Chinese empire and the Parthian Persian empire exchanged ambassadors. Chinese ambassadors (and merchants) gave gifts of silk cloth to the Parthians, Kushans, and other Central Asian states. Quickly realizing the value of silk, merchants from Persia, the Kushan and Maurya empires, and other Central Asian states began to trade regularly with Chinese merchants. Caravans of luxury goods regularly traveled the overland trade route, "the Silk Road" (really a number of routes, trails, and roads) that crossed the steppes north of the Himalayas ultimately reaching as far west as Rome. In addition to silk, commodities such as dates, copper, herbs, and ceramics were profitably traded along the "silk roads." Maritime commerce along the chain of seas that ran from the East China Sea to the Red Sea also developed rapidly in that era. Students outline the land and sea trade routes on a map, preferably a map of Afroeurasia, so that they can see that connections now spread all the way across the middle of Afroeurasia, from the Atlantic to the Pacific. Ideas also spread along the trade routes. In the climate of insecurity after the fall of the Han empire, missionaries began spreading Buddhism along the Silk Road to China. Students analyze the style of carvings of Buddhas and paintings from Dunhuang and Yungang, which combine Indian, central Asian, and Chinese artistic influences.

This set focuses on three important aspects of the Silk Roads during the earliest years of their operation, from approximately 50 BCE to 500 CE. These three aspects are the existence of multiple roads, particularly the sea route; the formation of the overland Silk Road from the conflict between the Han dynasty and the Xiongnu; and the transmission of Buddhism to China. Above all, students should recognize that a combination of trade and travel routes now stretched across central Afroeurasia from the Pacific to Atlantic oceans. This interconnection was never completely broken after this point.

The first important point is that the famous overland route through the oases of the Taklamakan Desert was not the only road that carried trade from China to the West. The sea route was open and traveled before the more famous land route, and it remained open when political and military conditions closed the land route. Evidence of glass eye beads produced in the Mediterranean region and Persia buried in Chinese graves dating as early as the seventh century BCE shows that ships sailed from India to Southeast Asia or China (Source 1). This trade expanded rapidly during the Han dynasty, as Arab and Indian ships sailed more frequently to Southeast Asia and China, where they picked up Chinese products of silk and lacquerware in exchange for Mediterranean glassware and wine, Indian gemstones, and Arabian incense.

The second aspect is that conflict was a central cause of the formation of the overland Silk Road. The Han were engaged in a long war with a powerful confederation of northern nomads, called the Xiongnu by the Chinese. Rather than a clan or a tribe, the Xiongnu was a military organization or alliance of many clans that lived in the grasslands and deserts north and west of Han China. The first Qin emperor built the Great Wall to keep these nomads out of China. The Xiongnu often raided northern parts of Han territory. Han emperors fought frequent wars with the Xiongnu and advanced into territory that had previously been grazing sites for nomad herds. From the Xiongnu perspective, the Chinese were invaders as well.

In addition to fighting, the Han government gave silk cloth and yarn as bribes to the Xiongnu so that they would not raid Han territory (Source 4). The Xiongnu, like other Central Asian nomads, were also merchants and long-distance traders. They sold silk to merchants in the market towns of the Kushan Empire and Parthian Persia. The Han also sent envoys, or diplomatic messengers, to the west to establish alliances with the Kushans (whom they called the Yuezhi) and other nomad kingdoms in Central Asia that were enemies of the Xiongnu (Sources 2 and 3). The Chinese offered these nomads silk cloth in return for an alliance and for horses (Source 5). The Han called the horses tribute, because of their conception of how all barbarians should view the Han emperor and China as superior. The “gifts” of silk were signs of the emperor’s benevolence. The Han also began to extend its watchtowers and guard posts along the trade route to the western portal called the Jade Gate, in order to protect and expand travel along the route. Caravans of merchants from both west and east benefited from this protection. After the fall of the Han dynasty and the Kushan Empire, Central Asian nomads and city residents along the Silk Road kept the trade route open.

Buddhist missionaries also traveled along the Silk Roads from India and the Kushan Empire into China. Recently historians have argued that Buddhism spread along the sea route first, because the earliest evidence of Buddhism came from south and central China rather than from the northeast. There is later evidence of Buddhism in the oases of the land route, but that spread might have been going in two directions. From Bamiyan to Yungang, just inside the Great Wall, there were cave monasteries and large communities of monks. Filled with Buddhist texts, carvings, and statues, these caves gave shelter to travelers and provided operating bases for Buddhist missionaries and local Buddhist converts. The most successful missionaries preached about the Buddha as a god and the possibility for common people to win salvation through bodhisattvas and enjoy a happy afterlife in Buddha-lands or heavens. This school of Mahayana Buddhism had much more appeal outside of South Asia, especially when Buddhists incorporated local deities and traditions in the local practice of Buddhism. Although the biggest wave of Chinese converts to Buddhism did not occur until the Tang dynasty (after the time period covered in grade 6), there were some Chinese converts. One of them, Faxian, made a pilgrimage to India around 400 (Source 8). The emperors of the Northern Wei dynasty, nomads who ruled over north China from 386 through 534, were generous patrons of Buddhism. Under their patronage, Yungang artists carved five enormous statues of meditating Buddhas. The surrounding caves contained statues of Buddhist deities and patrons and other treasures (Sources 6 and 7).

The network of trade routes called the Silk Roads connected the entire central portion of Afroeurasia by about 50 BCE, and the link it forged was never completely broken afterward. Instead, trade and connection increased. Another critical change from the earlier period was that through the spread of religions in the early centuries of the Common Era, there is strong evidence for the continuous exchange of people and ideas along those trade routes as well. For this point onward, China was strongly connected to the rest of Afroeurasia.

This account of Faxian’s travels along the overland Silk Road is challenging for a range of reasons: shifting locations from paragraph to paragraph, references to Buddhism concepts and traditions, and challenging vocabulary and phrasing. This literacy activity takes students through a process of examining the route that Faxian took, previewing vocabulary and Buddhist references, and paraphrasing and summarizing smaller pieces of the text to come to a better understanding of the whole. At the end, students will examine text evidence that shows how widespread Buddhism was along the overland Silk Road during the time of Faxian’s journey.