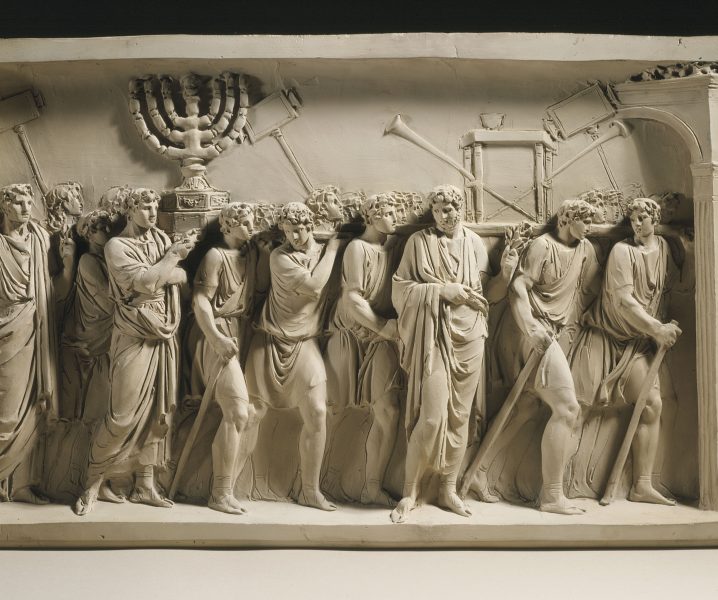 This set gives an introduction to the history of ancient Judaism through the Jewish holidays. The histories of the holidays demonstrate the importance of the agricultural cycle for the ancient Israelites, the centrality of the Temple for the development of Judaism and its practices, and challenges to religious life from conquerors (Babylonians, Persians, Hellenistic kingdoms, and Romans).

How did the environment, the history of the Israelites, and their interactions with other societies shape their religion?

The ancient Israelites, also known as the Hebrew people, emerged in the eastern Mediterranean coastal region about the twelfth century BCE. Originally a seminomadic pastoral people living on the Mesopotamian periphery, they organized the kingdom of Israel by the eleventh century. Founding a capital in the city of Jerusalem, they erected a Temple that centralized their religion, terraced the hillsides in their land, and built up an agricultural economy. While their state did not long survive, their religion, which became known as Judaism, made an enduring contribution of morality and ethics to Western civilization....

Judaism was heavily influenced by the environment, the history of the Israelites, and their interactions with other societies. The students return to the question: How did the environment, the history of the Israelites, and their interactions with other societies shape their religion? The many farming metaphors in the Torah show the pastoral/agricultural environment. The fragile position of Canaan in the Fertile Crescent between more powerful neighboring states dramatically affected the history of the Israelites. The Exodus from Egypt was an event of great significance to Jewish law and belief, especially the concept of a special relationship or covenant between the Israelites and God. After the Exodus, three successive kings who probably lived in the eleventh and tenth centuries BCE — Saul, David, and Solomon — united the land of Israel into a state. King David enlarged the Kingdom of Israel, established the capital in Jerusalem, was a poet and musician, and is believed to have written many of the Psalms in the Hebrew Bible. King Solomon extended the Kingdom of Israel through many alliances. He is best known for his wisdom, building the First Temple, and writing parts of the Hebrew Bible. After Solomon’s reign, the unified kingdom split into two: Israel in the north and Judah (from which we get the words Judaism and Jews) in the south....

Between the tenth and sixth centuries BCE, Assyria and then Babylonia absorbed all of Mesopotamia, some of Anatolia, and the Levant, including the two Jewish states, into their huge empires. The Babylonians deported many Jews to Mesopotamia, but in 539 BCE, Cyrus the Great, emperor of the new empire of Persia, allowed the exiled Jews to return home. Later their homeland was taken over by both Greek and Roman rulers. In 70 CE, the Roman army destroyed the Jews’ temple in Jerusalem.

This source set is designed to introduce students to the history of ancient Judaism through the Jewish holidays. The histories of the holidays demonstrate the importance of the agricultural cycle to the ancient Israelites, the centrality of the Temple for the development of Judaism and its practices, and challenges to religious life from conquerors (Babylonians, Persians, Hellenistic kingdoms, and Romans). It also emphasizes that Judaism, like all religions, has changed over time. Through analyzing the holidays students learn how the religion was shaped by the environment, history, and interactions with other peoples.

Two of the most important Jewish holidays, Rosh Hashanah and Yom Kippur, are called the High Holy Days. Rosh Hashanah is the New Year, the beginning of the Jewish calendar (Source 2). Yom Kippur, the day of atonement, is a day for fasting and seeking forgiveness for sins.

Three holidays — Passover (Source 4), Shavuot (Source 6), and Sukkot (Source 7) — arose from the agricultural calendar and the early history of the Hebrews, particularly the Exodus from Egypt. The ancient Israelites were farmers and herders in a hilly country with a Mediterranean climate, a piece of land known at different times as Canaan, Judah, Israel, Judea, and Palestine. These three holidays were pilgrimage festivals, because Jews from all over ancient Judea/Israel went to Jerusalem bringing offerings for sacrifice in the Temple before its destruction in 70 CE. These are also known as biblical holidays because the Torah, the first five books of the Hebrew Tanakh or Bible, commanded their celebration. Originally, the harvest celebrations and the religious ceremonies were separate, but over time the two became intertwined. The meanings and the customs of these holidays has similarly changed over time. Since the Torah was not written down in its present form until the fifth century BCE, while celebration of the holidays is much older, some of those changes appear in the text. However, there are also discrepancies in the Torah, and the process of interpretation has been continuous. Today Jews celebrate holidays quite differently from their ancient ancestors, because there has been no central temple since 70 CE and because it is common for practices in all religions to change over time.

Many Jewish holidays were shaped by the history of the Israelites and their interactions with other peoples. The Hebrews lived in the Fertile Crescent, a densely populated, highly desirable land, surrounded by other peoples. Stronger kingdoms and empires often conquered the Israelites and ruled over them. Incidents of liberation or resistance to foreign conquerors are marked by holidays. Passover commemorates God freeing the Hebrews from slavery in Egypt. Shavuot celebrates God granting the Torah to Moses and the Israelites. The victory of Judas Maccabeus in 164 over the Hellenistic Seleucid king who forbade traditional worship and desecrated the Temple is celebrated by the festival of Hanukkah (Source 10). Hanukkah is the only Jewish festival not ordained in the Tanakh. According to tradition rather than recorded in a written primary source, the two destructions of the Temple — first by the Babylonians in 587 BCE, and second by the Romans in 70 CE — occurred on the same day, the Ninth of Av, which during the rabbinical period was established as an annual day of mourning and fasting, Tisha B’Av (Sources 8 and 11). After the Temple was destroyed, Jewish communities had to change their rituals and practices. Unable to make pilgrimages to the Temple, Jews now performed their rituals, such as the Passover seder or carrying of the Sukkot species, at home or at a synagogue. Other religious rituals also changed; for example, daily prayers replaced the sacrifices that could no longer be offered at the Temple. Because the new religious leaders were called rabbis, the time after 70 CE is known as the rabbinic or rabbinical period.

To answer the investigative question, students could practice categorizing evidence into agricultural, historical, or culturally interactive (involving influences from another culture) origins. Agricultural evidence is related to farming and harvesting grains, grapes, vegetables, and fruits. Historical evidence is related to internal developments among the Hebrew people and changing customs by priests or Hebrew rulers, such as combining holidays or instituting a pilgrimage to the new Temple. Culturally interactive evidence involves influences, either positive or negative, that came from outside of Judaism and the Hebrew people or state, such as conquest by the Neo-Assyrians or the destruction of the Second Temple by the Romans. When students have finished analyzing the sources, they might make an interpretation to answer the investigative question. This may be a good time to teach them how to write a thesis statement. Because this inquiry set features evidence from a long time period and focuses on change over time, consider having students construct a timeline.

Teacher Background: Flavius Josephus, a Romano-Jewish historian, wrote this account of the origin of Hanukkah in an attempt to explain Jewish customs and religion to an educated Greco-Roman audience. Although he writes from the Jewish perspective, he had been educated in the Greco-Roman tradition and uses the style of historical writing from that tradition. He describes historical events in a narrative format and uses powerful emotional language to indicate value judgments of right and wrong. The length of the text and the complexity of its sentences will cause problems for English learners and those who read below grade level. The following strategy has students analyze the text organization of the source. Once students understand the organizational structure of a text, they can look at the way that language is used in order to understand the author’s purpose and the arguments he is making. In this excerpt, Josephus actually uses two different text patterns. The first section follows the cause-and-effect pattern, the middle section switches a sequence of events, and the final section returns to the cause-and-effect pattern. The graphic organizers provided help students unlock the structure and break down this complex text so they can understand what the author is doing as he moves back and forth between the different text organizations.

As with all religious topics, make sure that students understand the difference between studying texts for spiritual reasons (as they might in a church, temple, or mosque) and studying religious texts in history class. Remind students that historians try to understand what people in the past believed, and they try not to judge that belief by modern standards or their own personal beliefs. Likewise, students do not have to decide whether the story is factual; they just need to think about what those people believed. Encourage students to suspend judgment of others’ religious traditions and practice tolerance of religious differences and histories.