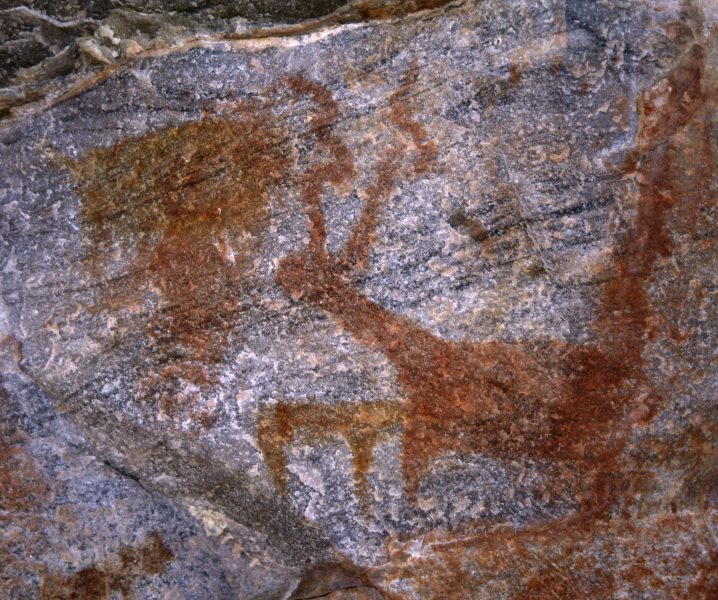 This inquiry set provides students with primary and secondary sources to analyze three types of evidence — from archaeological finds, linguistic analysis, and DNA studies — that support interpretations about prehistoric migrations. Students also learn the basic definitions and skills of historical inquiry and the difference between evidence and interpretation.

In the first unit, students learn about the emergence and migrations of early humans, the gathering and hunting way of life, and the emergence of village agriculture and pastoral nomadism. To frame the topic of the emergence and migrations of early humans, the teacher uses these questions: How did the environment influence the migrations of early humans? How did early humans adapt to new environments and climate changes? For millions of years, the genetic ancestors of humans, known as hominins (or hominids), used stone tools and lived on foods found by gathering and hunting. Archaeological evidence shows students that our earliest forebearers evolved in eastern Africa and that small bands of those ancestors migrated into Eurasia about 1.9 million years ago, driven by population gains and increased competition for food. Around 800,000 years ago, early humans discovered how to control fire, allowing them to cook food, keep away predators, and burn areas of land in order to flush out game. Homo sapiens, that is, anatomically modern humans, evolved in Africa around 200,000 years ago. Modern humans adapted well to new environments, developing increasingly diverse stone and bone tools for collecting and processing food. About 100,000 years ago, our species developed the capacity for language, which accelerated technological change. Spoken language and the evolution of pro-social mental and social structures enabled humans to teach complex skills to each other, cooperate with others, pass down ideas to the next generation, and talk about their world and the cosmos. After leaving Africa 90,000 to 100,000 years ago, humans may have reached Australia 60,000 or more years ago and Europe 40,000 years ago. In the Middle East and Europe, humans encountered Neanderthals, a related hominid species, who became extinct about 28,000 years ago. Early humans reached the Americas from Eurasia at least 12,000 years ago, possibly earlier. Students use maps to identify the patterns of early human migration and settlement that populated the major regions of the world. … To understand the gathering and hunting way of life and appreciate the linguistic and cognitive advantages of Homo sapiens, students analyze primary sources from this long time period before written language. Our knowledge of this era depends on evidence from material remains, especially from bones and stone tools, and, more recently, from research on human DNA and long-term climatic and geological change.

Because there are no written sources recording the experience of prehistoric people, our understanding of where and why they migrated, how they lived, what they believed, and how they thought is based on four types of evidence. The social science of archaeology provides the first type of evidence. Evidence from archaeology includes artifacts (things made by early humans); human and animal remains; marks of human activity on the land; and evidence of geological, environmental, and climate changes. Finds of ancient hominid bones in Olduvai Gorge in Africa are evidence supporting the interpretation that all hominid species came from Africa, for example. This source set contains visuals of tools, human structures, and prehistoric artwork found by archaeologists.

The second type of evidence comes from linguists and anthropologists, who study the similarities and differences among languages. They use evidence from words, syntax, and grammar to determine how languages are connected in language families or phyla (groups more distantly connected than families) and how long ago two groups speaking related languages parted from each other. Linguists use this evidence and scientific methods to reconstruct ancient proto-languages and paths of migration taken by groups who spoke those languages and descendant languages. A map of the language families of California indigenous people gives linguistic evidence about migration. Pre-Columbian California Indians spoke 78 mutually unintelligible languages, almost one-third of all languages spoken in North America, an incredible diversity that provides evidence for the waves of migration into California.

The third type of evidence has emerged only in recent decades with the advancements in research into DNA. Biomolecular analysis of isotopes and mitochondrial DNA provide evidence about the movements of individuals whose bones have survived and the genetic markers they share with modern groups. Scientists use the same methods to analyze food sources, plants, and diseases.

Another type of evidence comes from stories told by descendants of early human groups recorded in historical time. These stories about creation, the history of the group, the gods, animals — often called legends, myths, fables, etc. — were passed down orally perhaps for centuries before they were written down. There is significant debate about whether these sources are really evidence of an earlier time before they were recorded. Some social scientists reject them altogether, while others think the stories can be evidence of the ways that people thought and things that were important to them. This set does not contain any stories as sources, but teachers may choose to add a creation story to the set if they want to introduce students to the issues involved in using stories as historical evidence.

Since this source set is the first for grade 6, it is intended as an introduction to inquiry in history-social science as well as an investigation of prehistoric migration. Students will learn about and examine the key parts of the process of inquiry, such as primary and secondary sources, evidence, and interpretation. They will understand what evidence is available about early humans and compare it to the interpretations that social scientists — archaeologists, anthropologists, historians, economists, etc. — make about early humans. Students should use their textbooks along with the source set in the suggested activity. The suggested activity has two stages. In the first stage students should read a textbook summary and study a map of prehistoric migration. Next they will learn the definitions of a primary source, a secondary source, evidence, and interpretation and will identify examples of each (Student Handout 6.1.2). They will categorize all of the sources in the set (and their textbook) as either primary or secondary sources and distinguish between evidence and interpretation. In the second stage, students should analyze the primary sources to form their own interpretation to answer the investigative question.

Part I. Interacting in Meaningful Ways

how meaning is conveyed explicitly and implicitly through language.

7. Evaluate how well writers and speakers use language to support ideas and opinions

with details or reasons depending on modality, text type, purpose, audience, topic, and

8. Analyze how writers and speakers use vocabulary and other language resources for specific purposes (to explain, persuade, entertain, etc.) depending on modality, text type, purpose, audience, topic, and content area.

This literacy strategy makes space for class conversation around some potentially challenging scientific concepts and words related to DNA analysis for archaeological purposes. Its primary focus, however, is on the concept of modality: how speakers/authors modulate their expressed positions in terms of probability and confidence. This supports the set focus on the difference between evidence and interpretation by asking students to consider the way this distinction is or isn't communicated by the level of certainty expressed in the language choices in a secondary source text. It will enhance their ability to critically read secondary sources and make them more thoughtful about the appropriateness of their own language choices when presenting information with various levels of certainty.