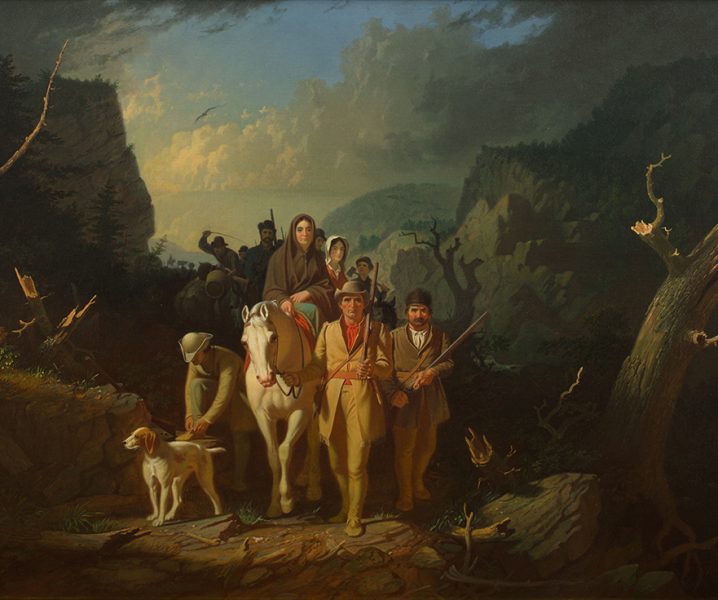 This inquiry set examines how American settlers moved westward through a focus on transportation. These new technologies transformed the landscape of the West and the lives of the peoples who lived there.

How did new methods of transportation transform people’s lives?

Students also learn about the Louisiana Purchase and the expeditions of Lewis and Clark, guided by Sacagawea, and of John C. Fremont. The themes of exploration, emigration, and immigration help students examine the significance of mobility and geography during this period in American history. Stressing the roles played by transportation technologies in this historical drama can make the processes and people under study far more accessible to students learning about a variety of cultures, communities, and environments.

The introduction of the horse on the Great Plains and in the Rocky Mountains may be compared with the inventions of the steamboat and the railroads and how they influenced the development and settlement of the American interior. How did these new methods of transportation transform people's lives? How did they reshape their relationships with distance, time, and other communities? How did they change the possibilities for production and consumption?

This inquiry set provides students with an example of the ways that settlement of Americans in the West changed over time as a result of technological innovation. Students will begin the inquiry by examining two sources (1 and 2) that provide context for the ways that American explorers and settlers traveled westward with un-mechanized forms of transportation — wagons powered by animals. With the development of canals, railroads, and maritime technology, the possibilities of and routes for expansion across the North American continent increased. These are revealed by Source 3, a map that details the ways that transportation technology enabled Americans to traverse to the other end of the county, state, or continent with increasing ease. The map can be used as a frame to orient students' attention to the ways in which transportation altered the way that Americans viewed travel, space, and even time. By the end of the nineteenth century a cross-continent journey was no longer a once-in-a-lifetime event, whereas 50 years earlier, it was.

The remaining sources (4, 5, 6, and 7) consider the technology of the railroad and its consequences on people in the United States in the period of westward expansion. Traditionally, westward expansion has been presented as a heroic triumph, central to linear narratives of American progress and manifest destiny. But these sources encourage students to consider the consequences of American colonization by asking, Progress for whom? The inquiry question prods us to consider how transportation transformed people's lives. By focusing on the railroad as both the crucial technology that enabled westward expansion and the quintessential symbol of American progress, students will explore how different peoples in the West — indigenous communities, immigrants, American settlers, and women — understood and experienced "progress."

Source 4 highlights the relationship between progress and nature, and how Americans viewed their domination of the landscape as part of bringing "civilization" to the West. Source 5 highlights the men who labored to build the railroad from California to the east, Chinese immigrants who laid the track across the West. Source 6 allows us to consider the consequences for California's original inhabitants of the rapid settlement that the railroad enabled. Here students explore the symbolic use of the railroad as well, showing how publications positioned indigenous peoples as relics of the past and idealized white American families as symbols of "civilized" society to signal who belonged and who did not belong in "modern" California. Finally, Source 7 and its accompanying activity reveal that not all Californians favored the development brought by the railroads. Students can read and analyze Henry George's argument against railroads and the policies that arrived with them to consider the question, Who really benefited from these technologies? By providing a space for discussion, these sources allow students to answer the inquiry question How did transportation transform people's lives? from a variety of perspectives.

Introduce the activity. Suggest to students that technological progress, in the past as today, often comes with both positive and negative consequences. Students will read in detail Henry George's essay "What the Railroad Will Bring Us" (Source 7) in order to chart his warnings about the negative consequences of the railroads in California. George's essay highlights the complexity of California politics and policy making; not all Americans were entirely supportive of the way that California was being developed in the late nineteenth century. This literacy activity helps students to consider how George frames his concerns and how this relates to our question, How did new methods of transportation transform people's lives?

Read, discuss, and analyze the text.

Begin by asking students to read the source alone, in pairs, or aloud to the class. Pose the question, What does George argue the railroad will bring us? Guide students to his argument, highlighted below.

Students then use the provided chart to translate the ideas into their own words (column 2) and then use the evidence to answer the question, How will this transform, or change, people's lives?

After the analysis of the text and the chart is complete, debrief the responses as a class. Finally, use the questions below the chart as discussion questions, including the lesson question.

Extend the learning. Students can put this source and the remaining sources in this inquiry set into categories. The teacher can then use these categories to develop a classroom claim to respond to the inquiry question. Teachers may also consider discussing current debates about technology and how it is transforming students' lives.