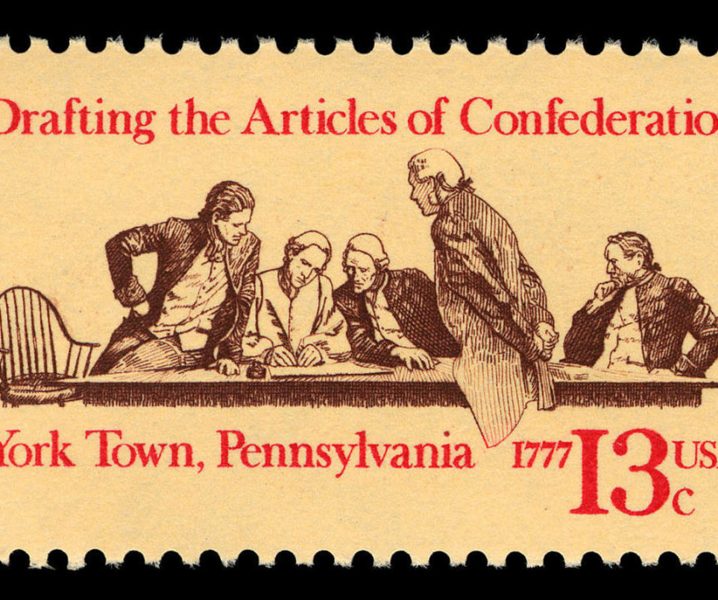 This source set allows students to study reasons why the Articles of Confederation were drafted, what their limitations were, and how these limitations led to the need for a stronger federal government.

What were the Articles of Confederation? Why did they ultimately fail?

What were the Articles of Confederation? Why did they ultimately fail? The Articles of Confederation were the first attempt to create a federal government for the 13 autonomous states that had freed themselves from British rule. The Articles provided a governing structure for the United States during the Revolutionary War, but quickly proved to be inadequate for the needs of the new nation. The Articles, which were finally ratified by all 13 states in 1781, enabled the new country to fight the Revolutionary War, negotiate with foreign powers, and expand to the west. However, the Articles established a weak central government, one that lacked an executive branch and a national judiciary.

Under the Articles, Congress also could not regulate commerce; therefore, states were able to impose barriers to trade with other states. Congress could not even force individual states to contribute to the national treasury. Because a strong central government was lacking and consequently unable to respond to domestic crises, such as Shays’ Rebellion in Massachusetts, and enforce a coherent and united foreign policy, national leaders began to call for a new governmental structure. By the spring of 1787, plans were underway to revise the Articles of Confederation. Although there was general agreement about the failure of the Articles, the debate over the size and scope of the federal government remained. James Madison played an influential role in planning the Constitutional Convention and setting its agenda.

This inquiry set is structured as a narrative for teachers to use to provide students with a timeline that explains how the Articles of Confederation came to be and why their weaknesses led to the need for a stronger federal government. In Source 1, students can engage in a visual analysis of a commemorative stamp to consider when and where the Articles of Confederation were created and by whom, thus providing context for the political document. Source 2 provides the coversheet of an original printed copy of the Articles of Confederation. Students can consider what a confederation was and how this was an important way for the states’ to conceptualize their organization as a cohesive political unit engaged in war. In addition, students will consider the term perpetual and how this might relate to the ideals of the representatives of the Constitutional Congress.

Source 3, is a secondary source blog post from the Constitution Center that lists and describes the weaknesses of the Articles of Confederation. Students can engage in a guided literacy activity where they consider each of the ten limitations of the document and discuss their significance. Sources 4 and 5, provide primary sources of the specific examples outlined in Source 3. Source 4 is a coin minted during the time of the Articles of Confederation and students analyze the coin to consider the ways that a national economy could be limited by the lack of a standard currency. Finally, the image of the Shays rebellion allows students to consider the importance of the state providing security for its citizens with this specific example of the need to contain and prevent violent rebellions.

Under the Articles of Confederation, the United States passed a series of land ordinances (most famously the Northwest Ordinance of 1787) that had lasting effects in American history. The ordinances established that the U. S. would incorporate western land as future equal states, rather than subordinate colonies. The weaknesses of the Confederation Congress gave state governments independence in terms of economic policies. Some states used this leeway to pass laws postponing debt and issuing new currencies, which helped poor citizens, which angered wealthy planters and merchants. While most citizens agreed that the Articles were too weak and should be amended, not all Americans believed that they needed to be replaced. The Confederation era was parked by lively debate about the specific powers that a United States federal government and economy should or should not have.

Students will be able to engage in a variety of visual analysis to support their understanding of the Articles of Confederation and can use this evidence to explain why the content of this document was not adequate for the US as it emerged newly independent on the world stage.

This literacy activity provides students with an introduction to the Articles of Confederation as a way for them to understand what these were and how this form of government was not sustainable for the needs of a functioning nation-state. So while students learn about this historical document, they are also learning about why the United States needed a more comprehensive political document to guide governance, thus setting them up for the next unit on the founding of the Constitution. This article from the National Constitution Center provides specific details about the weaknesses of the Articles of Confederation so that through a close read, students can see the many ways that the government lacked the authority to govern effectively.