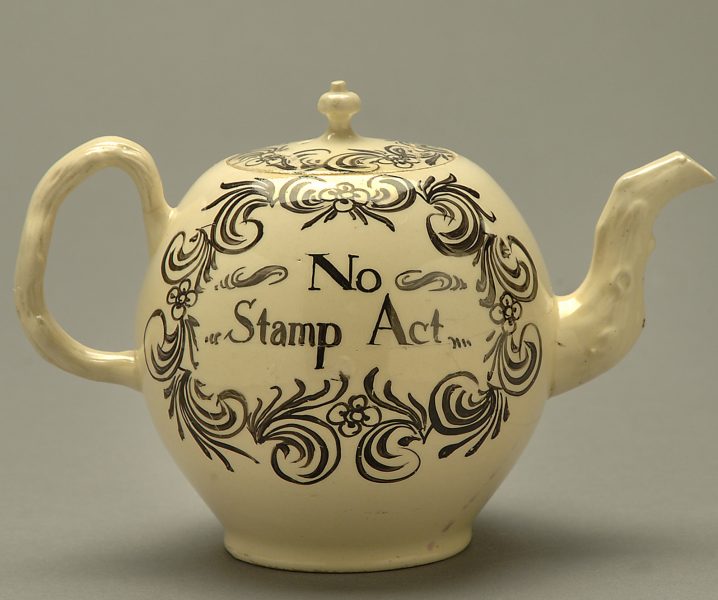 This source set will allow students to explore the major events that led to the American Revolution, focusing on the Parliamentary Acts and the colonists’ response to them.

Why did colonists start to rebel against Great Britain?

Why did colonists start to rebel against Great Britain? The British efforts to exert more power over the colonies were met with spirited resistance from the American colonists. King George and British legislators felt that the French and Indian War had been fought to protect the colonists. They also believed that the conflict had drained the British treasury and that the colonists should be taxed to cover the costs of the war. Parliament’s efforts to assert imperial sovereignty over the colonies and impose taxes because of the debts incurred during the French and Indian War fueled colonists’ growing dissatisfaction with Parliament. Those who firmly believed that only the colonial assemblies were empowered to raise taxes were especially incensed. Students should become familiar with the Stamp Act of 1765 and the colonists’ outrage over it; the Townshend Acts that again stirred protest and led to the Boston Massacre; the formation of the Sons of Liberty; the tax on tea that provoked the Boston Tea Party; and the Coercive Acts, designed in part to punish colonists for their destruction of tea.

The free people of Britain and British colonial America shared a common political culture based upon the rule of law, the shared understanding that free men had the authority to give consent to legislation and the right to a trial by jury, and that all free individuals could participate in political communities. Given these shared values, what pushed American colonists to rebel against Britain in the late eighteenth century? This inquiry set provides an opportunity for students to consider this question through the study of the ways that colonists exercised these political rights and freedoms in response to what some perceived as British tyranny. The sources in this set develop a chronological description of the ways that American colonists responded to British Parliamentary Acts — such as the direct taxation of the goods they purchased on a daily basis — that infringed on what they believed were their rights.

British American colonists participated in the British Empire’s relations of trade and warfare. They consumed goods from Britain and sold their raw materials and goods to Britons. When Britain and its Indian allies fought France and its Indian allies in the Seven Years’ War (1754 – 1763), British Americans contributed soldiers, supplies, and money. When Parliament tried to pay its war debts by taxing the exchange of goods between the colonies and the metropole (the colonizing power), British Americans saw this as an infringement of their political freedoms. This inquiry set highlights the important role of commerce in the American colonies and the British Parliament’s decision to collect taxes through interventions in trade.

Source 1 highlights the exchange of people, goods, and ideas across the Atlantic world. Direct connections between British North America and mainland Britain can be traced through specific objects Americans could purchase to clothe themselves and furnish their homes. Sources 2, 3, and 4 center on the Stamp Act, which the British Parliament passed in March 1765. Parliament intended for this direct tax on paper goods sold in the colonies to pay for Britain’s debts after the Seven Years’ War. Although Britain obtained revenue from the colonies in the past through levying duties on imports, this was the first direct tax — and it hit all consumers who purchased paper goods (see Source 2). In response, American colonists argued that their colonial legislatures were the only governing bodies that could tax them directly.

The protests against the British imposition of new taxes, starting with the Stamp Act, were led by the Sons of Liberty and included men and women from throughout the colonies. A secret group that formed in Boston, the group grew to include Americans from across the colonies and across the social spectrum. These Americans protested British policies using a variety of methods. One tactic that included both men and women was the use of boycotts, or targeted consumption, as evidenced by Sources 3 and 6. Source 4 illustrates how the Sons of Liberty used the free press as a vehicle to spread their ideas. Sources 5 and 7 highlight the escalation of this activism through protest in Boston. Source 5 can be used by teachers to illustrate the violence of these interactions, and also to reveal the propaganda developed by the Sons of Liberty that encouraged colonists to perceive the British as enemies. Source 7 represents the Boston Tea Party and suggests that this destructive protest was supported by the populace of Boston.

After students have considered all of these sources together, they should be able to answer the lesson question and engage in descriptions of the causes and consequences of British legislation to spark rebellion among American colonists.

This source was printed as a broadside, a one-sided printed paper, that was meant to be read by the public in Boston and beyond. The creator of this source is anonymous, as it was signed by "A Countryman. " However, the author has a very specific audience — adult men of Massachusetts with political power — whom he addressed to advocate for their fair participation in government and more openness and less secrecy and favoritism in politics. In fact, at the end the author asks that this document be read aloud by the Sons of Liberty in every town before the meeting where they will choose their representatives for the colonial legislature. This text is not only explicitly political, but it also suggests specific acts that Sons of Liberty should engage in. After reading this text students can consider some concrete descriptions of the ways that Americans could engage in politics and how this message was communicated in the colonies.

This text is very dense and uses challenging vocabulary that students may find difficult to comprehend. This literacy activity will ask students to read, comprehend, and translate the meaning of the text so they can understand its message.

Teachers may want to begin by showing the original broadside as pictured in Source 4 and discuss the format of the text. The Sons of Liberty emerged in Boston as a direct result of the Stamp Act; however, this group flourished elsewhere as well, with chapters in each of the colonies. Their activities included protests and printed tracts, like this source, advocating for specific policies that resisted British taxation and supported American's active resistance. Be sure to point out that the intended audience for this letter from the Countryman is his peers, men whom he hopes will be political allies.