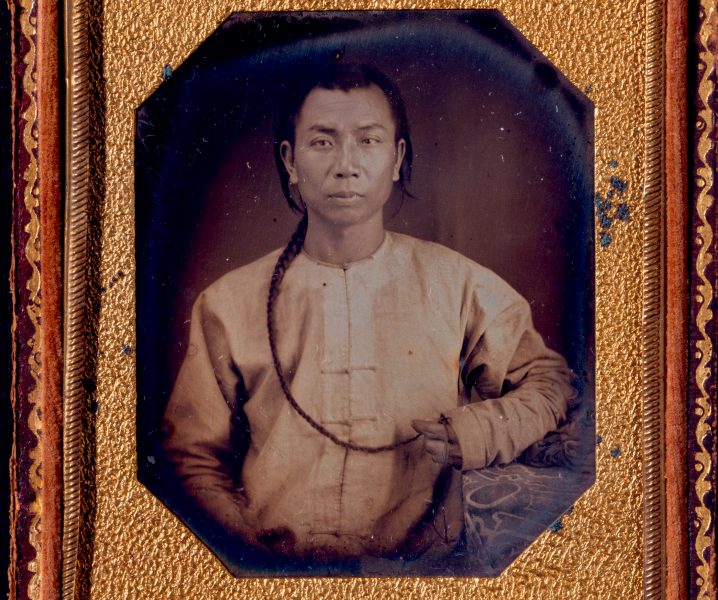 The goal of this inquiry set is to give students a comprehensive understanding of the lasting impact that the California Gold Rush had on the people living in California, as well as the demographic, economic, and environmental changes that occurred between 1848 and the 1870s.

How did the discovery of gold change California?

Students study how the discovery of gold and the spread of its news throughout the world affected the multicultural aspects of California’s population. Students can compare the long overland route over dangerous terrain to the faster sea route, either via Panama or around Cape Horn. Teachers can read aloud excerpts from Richard Henry Dana, Jr.’s Two Years Before the Mast. The arrivals of Asians, Latin Americans, and Europeans are included as part of this narrative. Students can also explore how the gender imbalance between women and men in California during the gold rush era allowed women who wished to participate in the gold rush to pass as men and led to a number of men to take on women’s roles. To bring this period to life, students can sing the songs and read the literature of the day, including newspapers. They might dramatize a day in the goldfields and compare the life and fortunes of a gold miner with those of traders in the gold towns and merchants in San Francisco. Students might also read historical fiction, such as Legend of Freedom Hill by Linda Jacobs Altman and By the Great Horn Spoon by Sid Fleischman, which will provide an opportunity to incorporate the CCSS Reading Literature standards and allow students to contrast historical fiction with primary sources, secondary sources, and other informational texts.

Students may also read or listen to primary sources that both illustrate gender and relationship diversity and engage students’ interest in the era, like Bret Harte’s short story of “The Poet of Sierra Flat” (1873) or newspaper articles about the life of the stagecoach driver Charley Parkhurst, who was born as a female but who lived as a male, and who drove stagecoach routes in northern and central California for almost 30 years. Stagecoaches were the only way many people could travel long distances, and they served as a vital communication link between isolated communities. Parkhurst was one of the most famous California drivers, having survived multiple robberies while driving (and later killing a thief when he tried to rob Parkhurst a second time).

Students also learn about women who helped to build California during these years, such as Bernarda Ruiz, María Angustias de la Guerra, Louise Clapp, Sarah Royce, and Biddy Mason, as well as the participation of different ethnic groups who came to the state during this period, such as those from Asia, Latin America, and Europe, as well the eastern part of the United States. Students consider how the Gold Rush changed California by bringing sudden wealth to the state; affecting its population, culture, and politics; and instantly transforming San Francisco from a small village in 1847 to a bustling city in 1849. The social upheaval that resulted from the lure of gold and massive immigration caused numerous conflicts between and among social groups. The mining camps were one site of conflict, as miners of different ethnicities and races fought for access to wealth. American miners fared best, as California introduced a foreign miners tax on non-Americans.

Another clear example of conflict during the Gold Rush era and early statehood was the loss of property and autonomy for many of the state’s earlier Mexican and Indian residents. In addition, great violence was perpetrated against many Indian groups who occupied land or resources that new settlers desired. Additional harm came by way of the Indian Indenture Act of 1850, which forced many Indians – mostly Indian youth – into servitude for landowners. The Gold Rush also caused irreparable environmental destruction through the introduction of hydraulic mining in the 1850s, which clogged and polluted rivers throughout the state, at great cost to the farmers affected downstream. Examining the development of new methods to extract, harvest, and transport gold during this period allows students to see direct interactions between natural systems and human social systems (California Environmental Principle II), See EEI Curriculum Unit Witnessing the Gold Rush 4.3.3).

The California Gold Rush was a defining, disruptive event that changed the state in ways that are still evident today. The goal of this inquiry set is to give students a more complete understanding of the lasting impact that the California Gold Rush had on the people living in California as well as the demographic, economic, and environmental changes that occurred between 1848 and the 1870s. Although the California Gold Rush was the largest westward migration in our country’s history, gold seekers came from every direction. Thousands of hopeful immigrants came from Asia, Central and South America, the Pacific Islands, Australia, and Europe. People from these diverse cultures clashed with one another, as well as with the indigenous people, the Californios, the US military, and Spanish, Russian, and Mexican traders who were all established in the region before 1849. As California’s population diversified and expanded exponentially, resources grew scarce. Violent conflicts between cultures erupted in mining camps and on city streets. Laws that codified racial discrimination and inequitable taxation were among the first enacted when California became the thirty-first state on September 9, 1850. Many American migrants who moved to California viewed this new US possession as the sole property of people from the United States, considering all other people “foreigners.” This group of “foreigners” included people to whom the US government had technically offered citizenship rights under the Treaty of Guadalupe Hidalgo (1848), such as Native Californians and pre-Gold Rush residents of Mexican California. Americans viewed Native people as barriers to settlement in California, and many used violence to remove Native people from desirable land. The intentional violence against Native Californians was so extreme that it constituted a genocide. Officials at local, state, and federal levels financially supported the genocide of California Indian peoples. State and local laws further facilitated the attempted extermination of Native Californian communities and cultures from 1850 to the 1870s. American militiamen, groups of self-described Indian hunters, land-hungry ranchers, and other individuals worked together to commit acts of violence, wiping out entire Native communities during this period. The impact of violence, disease, and environmental changes on indigenous people was so extreme that the population of Native Californians declined from approximately 150,000 in 1848 to less than 17,000 people by 1900. Many rushed in. Very few found gold, but the California Gold Rush brought unprecedented economic growth nonetheless. Entrepreneurial immigrants capitalized on the needs of the state’s booming population. There was money to be made in farming and ranching, in manufacturing and building infrastructure, in banking and real estate, and in catering to a new, wealthy merchant class. In San Francisco, the state’s first truly metropolitan city, the divide between the haves and the have-nots became both evident and undeniable. Still, the overall strength of California’s economy and its abundant natural resources were the impetus for building the Transcontinental Railroad, which allowed California businesses to enter a market relationship with the rest of the country and, in turn, created the state’s first millionaires. Mining degrades both the land and its waterways. In addition to clear-cutting areas to build campsites, miners diverted streams and rivers, damaging the fragile ecosystems that supported California native plants and animals. Some introduced toxic mercury into the water system (because it adheres to gold, making it easier to locate in moving water). Unencumbered by any form of government regulation or oversight, large mining companies cleared hillsides and leveled mountains when they introduced hydraulic mining, a system of strip mining that erodes the landscape and clogs rivers with sludge and debris. The environmental toll of the California Gold Rush was dire and far reaching. The primary sources selected for this inquiry set include photographs, prints, a manuscript, and a map to illustrate how the Gold Rush changed the state in fundamental ways. Together these sources encourage deeper inquiry and conversation about issues of race, class, and conflict during prosperous times and the value of our natural resources, as well as how a single event can alter the course of history.

To help students understand both E.A. Stevenson’s argument in his letter to the superintendent of Indian Affairs (Source 6) and the strategy he employed to persuade the reader, teachers can guide students to analyze his writing by asking them to consider his word choice, differentiating between current and past tense and speculating as to Stevenson’s intent and effectiveness, as detailed in Student Handout 1.

Teachers should note that Stevenson utilizes a before/after paradigm in order to make an argument about the impact of the Gold Rush on the well-being of the Native population in El Dorado County. He does this by contrasting the conditions before the Gold Rush (signaled by the markers “formerly” and the use of past tense) with current conditions in 1853, described using the present tense. Although he doesn’t use explicit cause and effect language (such as, “because” or “as a result of”), his use of this past/present rhetorical stance is an effective method intended to persuade the reader of the causal links between the Gold Rush, environmental conditions, and the health of Native society.

4.3 How Did the Discovery of Gold Change CA Student Handout

4.3 How Did the Discovery of Gold Change CA_ Teacher Key

Genocide of Native Californians: Many scholars have illustrated that the extreme violence against Native Californians from 1850 to the 1870s, in conjunction with policies to remove Native children from their families and forced assimilation efforts, constituted a genocide according to the definition of genocide established by the United Nations Genocide Convention in 1948. Suggestions for teaching genocide: 1. Explain the precursors to the genocide such as the dehumanization of Native people in American society, framing Native people as barriers to development, removal of people from tribal homelands, and the long-term history of forced assimilation. 2. Frame the genocide within the context of the historical period. 3. Focus on the human aspect of the genocide. Use first-hand accounts from survivors, victims, perpetrators, and bystanders when possible. 4. Encourage critical analysis of newspaper articles and other historical sources that provide insight into events. Encourage students to consider the bias in these sources. Do they tell the full story? What perspective is left out? How can we find a more clear understanding of events? The book Exterminate Them!, edited by Cliff Trafzer and Joel Hyer, includes many primary source excerpts from newspapers that would be useful for this activity. Try to name perpetrators and survivors; do not use phrases that generalize actions or experiences of entire groups, such as “all people thought/did/felt…”. Do not create activities that use hypothetical situations in which the genocide did not happen. Similarly, do not talk about the inevitability of the genocide. Base your discussions on concrete evidence. Provide students with primary sources, such as Source 11, and guide them through inquiry processes about how and why these acts of genocide occurred.

4.2b Missions' Impact on Environment and Economy