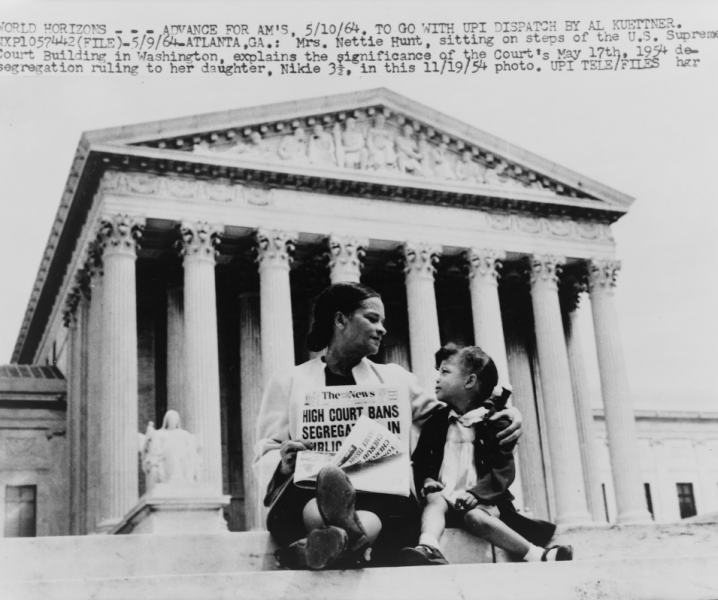 This inquiry set asks students to examine primary documents – from amendments to the U.S. Constitution to an African American woman’s handwritten plea to the court after being forcibly ejected from a streetcar, to a photo of a Mexican American family who challenged race discrimination in public schools – that will enable them to understand both the enduring primacy of the Constitution and the different ways it has been interpreted by the courts over time.

What makes a law constitutional, and does that determination ever change?

The courts play a unique role among the three branches because the framers intended the courts to be insulated from public opinion in order to independently interpret the laws. Students begin their study of the work of the Court by reviewing Marbury v. Madison (1803) to answer the question, What is judicial review, and how does it work? Students concentrate on how the courts have interpreted the Bill of Rights over time, especially themes such as due process of law and equal protection as guaranteed by the Fourteenth Amendment, by answering the question, What makes a law or an action unconstitutional, and does that determination ever change?

Whenever possible, students should learn through illustrations of the kinds of controversies that have arisen because of challenges or differing interpretations of the Bill of Rights. For example, the unit can be organized around case studies of specific issues, such as the First Amendment’s cases on free speech, free press, religious liberty, separation of church and state, academic freedom, and the right of assembly, or the Fourth Amendment’s warrant requirements and protections against unreasonable search and seizure.

In examining the evolution of civil rights under the equal protection clause of the Fourteenth Amendment, students can draw upon their knowledge of the Civil War and the passage of the Reconstruction-era amendments. Students may examine the changing interpretation of civil rights law from the Plessy v. Ferguson decision of 1896 to the Brown v. Board of Education decision of 1954. Although it is not possible to analyze every decision that marked the shift of the Supreme Court from 1896 to 1954, critical reading of the Yick Wo v. Hopkins, Korematsu v. United States, Mendez v. Westminster School District (US Circuit Court of Appeals, 1947), and Sweatt v. Painter decisions remind students that racial discrimination affected not only African Americans but other groups as well, including Asian Americans and Hispanics.

Students may use materials from these cases and others to analyze majority and minority opinions; participate in classroom courts; write simple briefs extracting the facts, decisions, arguments, reasoning, and holding of the case or editorial pieces stating their views; and using evidence to support their conclusions about the decision.

This inquiry set asks students to examine primary documents — from amendments to the US Constitution to an African American woman’s handwritten plea to the court after being forcibly ejected from a streetcar, to a photo of a Mexican American family that challenged race discrimination – that will enable them to understand both the enduring primacy of the Constitution and the different ways it has been interpreted by the courts over time. 1. US Constitution 2. First Amendment 3. Marbury v. Madison: Judicial review 3a. US Supreme Court ruling in Marbury v. Madison (fragments of the original ruling, partially destroyed by fire) 4. Fourteenth Amendment — Equal protection 5. Yick Wo v. Hopkins 6. Plessy v. Ferguson 7. Mendez v. Westminster 8. Brown v. Board of Education — The End of Separate but Equal 9. Obergefell v. Hodges — Marriage Equality As they examine the primary sources, students will observe that while judges always look to the Constitution as the fundamental basis to determine the validity of any law, social movements and the actions of courageous individuals have influenced court rulings to provide a more expansive view of rights. Throughout this examination of what makes a law constitutional, we will highlight not only court rulings but also the people behind them, those individuals and organizations that have challenged unfair laws — even settled law — and made changes that affect the rights of us all.
Teacher background: With the Marbury v. Madison decision in 1803, the Supreme Court established the doctrine of judicial review, the power of the judicial branch to review the actions of the legislative and executive branches. The following excerpt from the Court’s ruling outlines and justifies that power. The language in this excerpt may be challenging for students due to the use of reference devices, unfamiliar vocabulary, and convoluted interconnected phrasing. The following activity will help students both understand the decision and think about its overall significance. 1. Pass out Student Handout 12.5. Explain to the class that they’ll be continuing their investigation into what makes a law unconstitutional by focusing on an excerpt from a Supreme Court decision from 1803, Marbury v. Madison. 2. As a whole class, have students read the full excerpt aloud. Define for them the term conformably and any other unfamiliar words. 3. Ask students to share their initial thoughts regarding the excerpt. What do they get? What is confusing? 4. Divide the class into pairs or groups of three. Tell them their job is to work together to better understand what the Court is saying regarding the role of the judiciary. 5. Explain the sentence deconstruction chart on Student Handout 12.5 — the four columns divide the text into parts, based on how the words and phrases function in a given sentence. Tell students that their first job is to fill in any open spaces, using the excerpt from Marbury. (Note: The text in parentheses clarifies who is doing what by specifically listing reference devices.) 6. Once the charts are complete, have students compare their answers with the key. 7. Next, have students look at the first three columns, one at a time. Ask them to describe any patterns, common themes, or types of words. For the Participant column, ask them to discuss: who or what are doing things in this excerpt? (the law, the Constitution, a case, a legislature) For the Circumstance/Connector column, ask them to describe what types of words these are — what are they doing in this excerpt? (they are describing relationships between other words) For the Process column, ask them to describe what the participants are doing (these are action verbs that direct, define, or offer a rule for making a decision or for governing) 8. Once they’ve completed their charts and described the types of words in each column, tell students their next job is to draw or create an infographic or picture that defines or describes the relationship between the Constitution, the law, the legislature, and the Supreme Court. Who has power over whom? Who has the last word? What happens when there is disagreement? 9. Answers will vary but should show that students understand the following: The Supreme Court has the power to review laws passed by both state and federal legislatures. When the Constitution and laws are in opposition, the Constitution must prevail. 10. After students engage in the sentence deconstruction chart, they can synthesize information in the final graphic organizer. This graphic organizer encourages students to chart literal details about the significance of each document, and it asks them to compare them as the documents have been in conversation with one another over time. Handouts 12.5AD What Makes a Law Constitutional_ Does That Ever Change_ Who Decides_ Literacy Activity, Student Handout 12.5AD What Makes a Law Constitutional_ Does That Ever Change_ Who Decides_ Literacy Activity Teacher Key
The issue of marriage equality, discussed in Source 9 (Obergefell v. Hodges), may touch on sensitive issues for some students who are themselves LGBTQ but may not be open about their orientation or, on the other hand, students who have been raised in religions that oppose same-sex marriages.