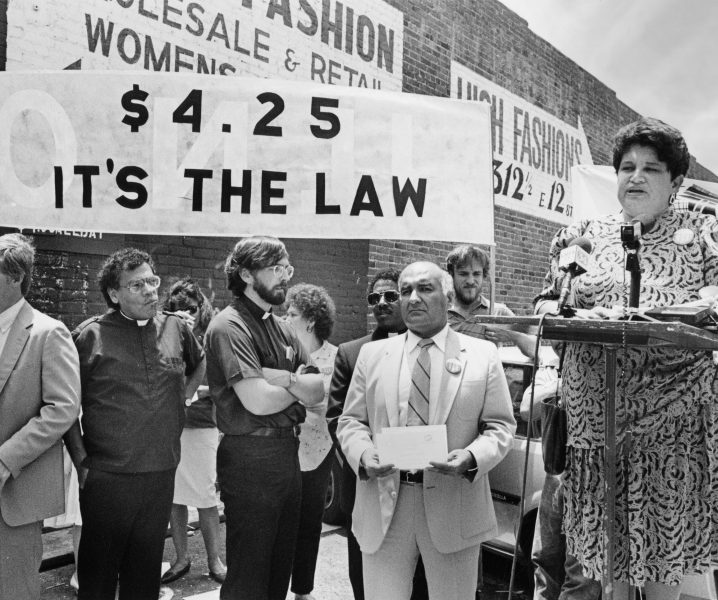 This set uses the garment industry as an example of why and how laborers organize for worker protections.

How and why do workers organize?

This question can help students understand the role of the labor movement in affecting workers and the economy: How and why do workers organize? Students also study the history of the labor movement and assess its impact on labor markets, including methods used by unions to gain benefits for their members. They can also analyze the role of government in protecting workers’ rights to organize and strike, as well as in preventing excessive disruption from prolonged or violent labor actions. By researching data and evaluating the source of the data, students can participate in an investigation about the effects of unionization on wages and employment in particular industries, including farm and public sector workers.

Students can participate in a collective bargaining simulation to better understand the competing interests of workers and employers. One group of students can examine the struggles of workers to increase their pay and improve their working conditions. Another group can consider the challenges of employers to improve productivity, limit costs, and, in the case of for-profit businesses, increase profitability. Students can also examine relevant legislation and court rulings, such as the right to organize, worker safety, and anti discrimination policies. The first week of April is Labor History Week. Students may participate in a variety of activities or projects to become aware of the role that the labor movement has played in shaping California and the United States.

The history of the labor movement in the United States goes back to the colonial period, when skilled trade workers joined together to protest wage cuts and other workplace hardships. In 1842 the Massachusetts Supreme Court ruled that workers had the right to organize a union or to use a strike to bring recognition of that union. Unions, however, did not become common until after the Civil War, during a time of rapidly increasing industrialization. The National Labor Union, the first sustained national association of unions, coalesced in 1866. Like many later unions, the National Labor Union worked to establish an eight-hour work day and arbitration of disputes between workers and company leadership. Unions have historically also supported a minimum standard of workplace safety and health, fair pay, and compensation for workplace injuries. In some industries and workplaces, an employee can be required to belong to the local union as a condition of employment. The intersections of the labor movement with immigration, race, and ethnicity have always been complex. Historically, immigrants have filled blue-collar jobs, sometimes as skilled laborers and sometimes not. For reasons such as language barriers, prejudice, and divisions in trades or skills, many unions from the nineteenth century to more recent times have been largely homogeneous. Unions like the Brotherhood of Sleeping Car Porters (for African Americans) and the Chinese Ladies’ Garment Workers’ Union formed in response to racial and gender barriers. However, principles undergirding unions have always supported greater social equality. In the post–World War II era, unions responded to the civil rights and women’s movements by making more room for diversity in unions and union leadership. The extent to which the government has gotten involved in labor issues has varied over time. The federal government has sent its troops to quell strikes, as in the case of the Pullman Strike of 1894. In other eras, the federal government has been more supportive of unions, as evidenced by the 1935 National Labor Relations Act (Wagner Act), which committed the government to enforcing employee rights, guaranteed workers the right to form and join unions, and obligated employers to bargain with the unions represented in their workplace. Union membership reached its height after World War II, when roughly one-third of wage earners belonged to some such organization. Between 1945 and 1970, unions helped ensure that wages in manufacturing tripled, while unions across many industries pushed successfully for greater protection against unemployment, illness, and old age. In 1947, the federal government allowed each state to decide whether to pass a “right to work” law, which makes it illegal for a union to require membership among employees at a particular place of business. Due to a number of factors, union membership began to decline after 1970. Competition with an unprecedented amount of low-cost foreign goods, deregulation and restructuring of certain industries, and, eventually, the loss of US manufacturing jobs to overseas, as well as President Ronald Reagan’s decision to fire over 10,000 striking air traffic controllers, all meant that by the late 1980s only around 15 percent of workers belonged to a union. Today this number is closer to 10 percent. Some of the challenge is also due to the increase in service-sector jobs, which are less prone to organization, and the number of immigrant laborers in the United States who are here illegally and afraid to unionize for fear of being deported. The sources in this set focus on the history of the labor movement in the US garment industry and provide students with the opportunity to examine the arguments and strategies of unions, as well as weigh the advantages and disadvantages of unionization. Sources 6 and 7 examine the challenges associated with labor rights in an era of globalization.
See Student Handout   Handouts 12.4E Labor Organizing and the Garment Industry Student Handout 12.4E Labor Organizing and the Garment Industry Teacher Key