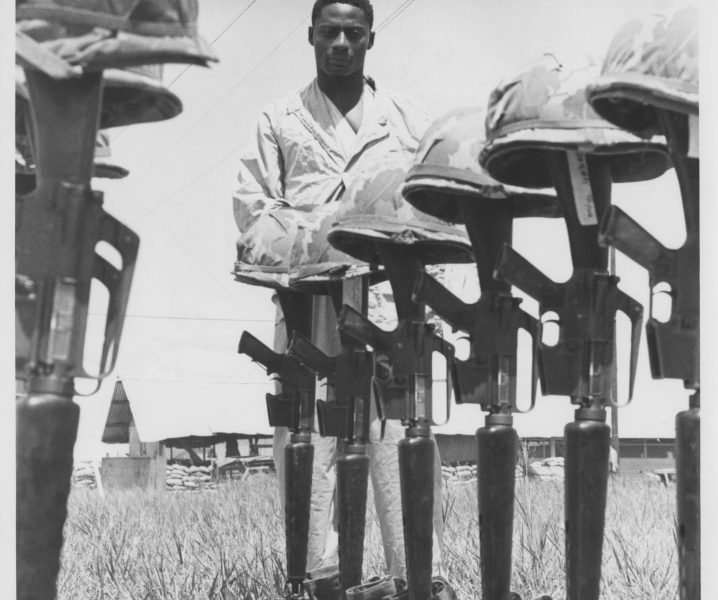 This inquiry set includes images, letters, and interviews that highlight the effects of the Vietnam War. Students will explore how the war in Vietnam was different from other wars and Cold War struggles. The documents encourage students to explore the impact of the war on diverse groups of Americans. Students will also examine how growing opposition to the war ignited discussions about racism and oppression of people of color and fueled movements for equality at home.

Two questions can guide students' investigations of the war in Vietnam: How was the war in Vietnam similar to and different from other Cold War struggles? How did the war in Vietnam affect movements for equality at home? After escalation of the war following the Gulf of Tonkin Incident and Resolution, along with Johnson's re-election in 1964, the U.S. military embarked on an air and ground war that aimed to eliminate the communist threat from South Vietnam. Hundreds of thousands of American service members volunteered and were drafted to fight in the war, which government and military leaders portrayed as an extension of broader Cold War struggles. During the first year of the war, American casualties started to mount, progress seemed elusive, and the ways of achieving success were muddled. In the haze of war, American journalists reported on television what urban warfare and guerrilla fighting entailed; in this context, Americans started to call into question the principles on which the war was fought. By the time of the Tet Offensive and My Lai Massacre in early 1968, American public opinion had turned against the war effort. According to Senator William Fulbright: "We are trying to remake Vietnamese society, a task which certainly cannot be accomplished by force and which probably cannot be accomplished by any means available to outsiders. The objective may be desirable, but it is not feasible . . ." Moreover, when it became clear that American minorities were fighting and dying disproportionate to their representation in the country, many radicalized rights groups loudly protested the war on the grounds that, to them, it represented one more form of oppression — of minorities at home — and abroad. Inside the antiwar and rights protest movements, a "counterculture" emerged with its own distinctive style of music, dress, language, and films, which went on to influence mainstream social and cultural sensibilities. Those that participated in the counterculture believed that true equality could be realized only through a revolution of cultural values; thus hippies decided to "check out" from mainstream society as a way of rebelling against the mainstream middle-class American values and seeking true happiness. Counterculturalists rebelled by calling into question Cold War values and even American principles. According to Mario Savio, a pioneer of the Free Speech Movement at UC Berkeley in 1964: There's a time when the operation of the machine becomes so odious — makes you so sick at heart — that you can't take part. You can't even passively take part. And you've got to put your bodies upon the gears and upon the wheels, upon the levers, upon all the apparatus, and you've got to make it stop. And you've got to indicate to the people who run it, to the people who own it that unless you're free, the machine will be prevented from working at all.

This inquiry set includes images, letters, and interviews that highlight the effects of the Vietnam War. Students will explore how the war in Vietnam was different from other wars and Cold War struggles. The documents encourage students to explore the impact of the war on diverse groups of Americans. Students will also examine how growing opposition to the war ignited discussions about racism and oppression of people of color and fueled movements for equality at home. Taken as a group, these documents help students to develop a multidimensional response to the question, How did the war in Vietnam affect movements for equality at home?

The first two documents in this inquiry set — a photograph of a ceremony honoring dead soldiers and a photograph of a college student asking people to register as conscientious objectors — highlight the intimacy with which young people experienced the war. After the Gulf of Tonkin Resolution, President Johnson secured a resolution authorizing an escalation of the conflict, which quickly became an air and ground war. Over 1965 and 1966 tens of thousands of young men enlisted in the military voluntarily and through the draft. By 1966, thousands of American men had lost their lives fighting in Vietnam. As the body count increased, those who were subject to the draft began questioning the grounds upon which the war was being fought in the first place. College campuses became central to the student-led antiwar protest. Havens of free speech, by the mid-1960s many college campuses served as physical and ideological meeting places for activists. Labor organizers, civil rights protesters, free speech activists, and now antiwar protesters attended the same universities and learned from one another.

The third and fourth documents highlight how Americans at home began to question their government and then started to link the oppression of people of color at home with people of color abroad. Source 3 highlights the frustration that some Californians faced in trying to uncover information about the conduct of the war. Known as the first "television war," many Americans tuned in to see the destruction of the war, yet the government's messages about progress on the war increasingly diverged from what was shown on television. This widening gap — which has become known as the credibility gap — caused many Americans to question the reliability of their leaders and the premise of the war. Moreover, when antiwar activists began to question the premise under which the war was being fought, they started to frame the war as less of a Cold War conflict and more of a colonial occupation and attempted conquest. This kind of thinking led these activists to call for a Third World liberation movement that would link oppressed and colonized people around the world. American activists who called for this kind of antiwar protest explicitly linked decolonization efforts in Africa, South America, and Southeast Asia with the American movements for civil rights.

The final three documents display the consequences of the war for people of color — at home and abroad. Source 5, an interview with a Japanese American student whose friend was killed in the war, highlights the struggle of a previously oppressed population in the United States being asked to make more sacrifices for this country. Sources 6 and 7 highlight the refugee population that was displaced by the war.

Taken as a group, the documents in this Vietnam inquiry set provide students with an overview of the way in which a diverse group of Californians experienced the war in Vietnam.

Robert Allen, a Black graduate student living in the Bronx, submitted this letter on August 1, 1965, in response to his draft notice, expressing his opposition to the war and unwillingness to be drafted. The letter may be challenging for many students due to some vocabulary terms, some moments of passive voice that obscure agency, and potentially confusing references to various participants within the text. This literacy activity, then, will help students (1) acquire new vocabulary through the use of a glossed text, (2) notice and analyze moments of passive voice, (3) match noun phrases (including pronouns) to the participants they reference to help highlight pertinent details and characterizations for each participant, and (4) use these details and characterizations to reflect on how and why Allen objects to the war and what we can infer from his letter about the war's impact on movements for equality at home.