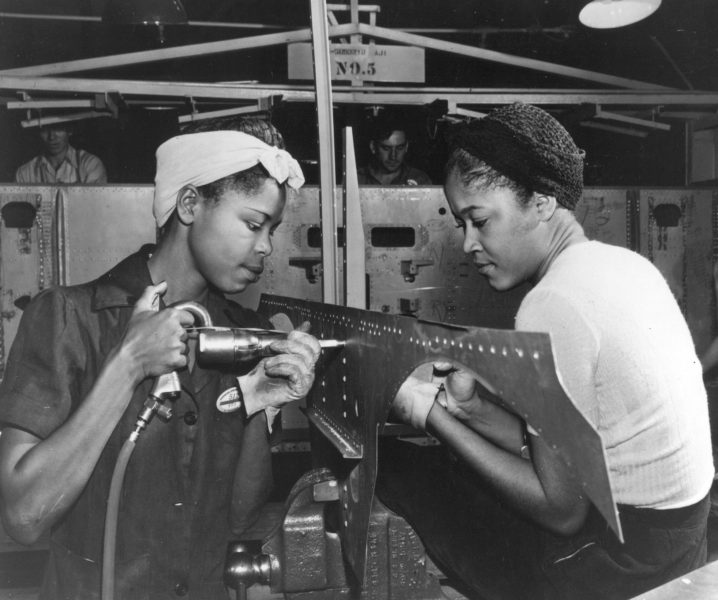 This inquiry set is designed to introduce eleventh-grade students to the ways in which World War II served to advance movements for equality. Historians regard the war effort as an important turning point for the modern civil rights movements because of the demographic, economic, and ideological transformations that took place during that era. The documents in this collection span a variety of ethnic, racial, national, and gender perspectives.

How did World War II serve to advance movements for equality at home and abroad, and how did the American government change because of World War II?

At home, World War II had many long-lasting effects on the nation. Industrial demands fueled by wartime needs contributed to ending the Depression and set a model for an expanded governmental role in regulating the economy after the war. Students can consider this question in order to identify cause-and-effect changes for ordinary people on the home front: How did World War II serve to advance movements for equality at home and abroad? Wartime factory work created new and higher-paying job opportunities for women, African Americans, and other minorities; the opening up of the wage-labor force to women and minorities helped them to raise their expectations for what they should be able to achieve. Unlike World War I, many women remained in the workforce after demobilization.

The defense-related industries became especially critical to California’s economy, helping to drive other sorts of development such as the manufacturing sector and the science–technology establishment. These jobs drew enormous numbers of migrants from other parts of the country and eventually spurred the creation of expansive suburbs, highways, and shopping complexes.

Meanwhile, immigration continued, especially to California, which depended on agricultural labor provided by immigrants, particularly Mexicans, who came through the Bracero Program. This 1942 government-sponsored program, designed primarily to replace native-born agricultural and transportation industry workers who were mobilizing for war and interned Japanese-American farmers with imported Mexican laborers, continued until 1964. Instruction on the Bracero program may include oral or video histories of those who came to the United States as part of the program. Students can use those resources to explore the economic and cultural effects of the program during and after World War II and the reasons why the braceros chose to participate.

In addition to the economic opportunities advanced by World War II, the ideology of the war effort, combined with the racial segregation of the armed forces, sparked multiple efforts at minority equality and civil rights activism when the war ended. For example, the head of the largely African-American Brotherhood of Sleeping Car Porters Union, A. Philip Randolph, planned a march on Washington, D.C., in 1941 to focus international attention on the hypocrisy of undemocratic practices at home while the country was about to become engaged in fighting for democracy abroad. This march ultimately prompted President Roosevelt to sign Executive Order 8802 to desegregate military-related industries.

Readings from Gunnar Myrdal’s An American Dilemma help students consider the contrast between American principles of freedom and equality and practices of racial segregation in the context of World War II. Military officials established an unprecedented effort to screen out and reject homosexuals, though gay men and lesbians still served in the armed forces in significant numbers. Some were tolerated in the interests of the war effort, but many others were imprisoned or dishonorably discharged. That persecution set the stage for increased postwar oppression and organized resistance.

But wartime racial discrimination went beyond military segregation. Los Angeles Mexicans and Mexican Americans found themselves under violent attack during the 1943 Zoot Suit Riots, when the police allowed a rampage of white Angelenos and servicemen against them.

In 1942, President Roosevelt signed Executive Order 9066, which authorized the relocation and internment of 110,000 Japanese Americans and “resident aliens” living within 60 miles of the West Coast, and stretching inland into Arizona, on grounds of national security. The order violated their constitutional and human rights, but the Supreme Court, in a decision heavily criticized today, upheld its implementation in Korematsu v. United States, arguing, “when under conditions of modern warfare our shores are threatened by hostile forces, the power to protect must be commensurate with the threatened danger.”

In addition, many persons of Italian and German origin who were in the United States when World War II began were classified as “enemy aliens” under the Enemy Alien Control Program and had their rights restricted, including thousands who were interned. The racial distinction in the application of these policies is clear in the fact that, unlike the Italians and Germans who were interned, over 60 percent of those with Japanese ancestry were American citizens. Japanese Americans lost personal property, businesses, farms, and homes as a result of their forced removal. After Japanese Americans spent many years campaigning for redress, Congress apologized in 1988 for Japanese internment and allocated compensation funds for survivors. Only What We Could Carry, edited by Lawson Inada, is a particularly good source for firsthand accounts of the Japanese American experience during World War II, including oral histories of servicemen.

This inquiry set is designed to introduce eleventh-grade students to the ways in which World War II served to advance movements for equality. Historians regard the war effort as an important turning point for the modern civil rights movements because of the demographic, economic, and ideological transformations that took place during that era. The documents in this collection span a variety of ethnic, racial, national, and gender perspectives. While they focus most heavily on California’s centrality on the home front of the war effort, the documents do address the national context through legal, political, and military policy. The explanations for students and teachers are longer in this inquiry set than in other sets, because many of the primary sources are photographs that can help engage students. However, in order for students to understand the historical significance of the sources, they must learn about the context behind the images and how these documents portray important moments in the war effort and the communities represented by the documents.

Sources 1 and 2 depict ways in which women participated in the war effort, both as members of the armed services and as workers. World War II famously brought married women into the workforce in numbers never seen before. Although the intent of the Rosie the Riveter campaign was for female workers to temporarily fill job vacancies, World War II helped advance the overall numbers and percentages of all women working outside the home for wages.

Sources 3 and 4 focus on Japanese Internment and a dissenting opinion in the Korematsu case. Japanese internment certainly demonstrated the limitation of the allied claim to participation in the war on behalf of human rights, but the ways in which Japanese Americans experienced internment, and its effects, highlights how this community experienced World War II.

Sources 5 through 8 focus on the ways in which African American men and women experienced the war through the lenses of work, military service, and the famed Double Victory Campaign, which sought to fight for victory abroad against fascists and at home against racists.

Sources 9 through 11 depict how the ethnic Mexican community experienced the war effort through the Bracero Program, and through civil rights.

Collectively, these primary sources can help provide students with a foundation to explore not just how the war fundamentally transformed America’s role in the world, but also how the war transformed communities.

A visual literacy activity is also central to students’ investigation into the sources in this collection. There is a visual literacy frame and step-by-step instructions for teachers to guide students as they explore the literal and also the artistic elements of many of these documents. While the activity uses the Source 7 NAACP poster as the model, this activity may be replicated for students to engage with a number of sources in this collection. Deceptively simple for what they display and how they appeal to students, visual sources can be challenging for students to discern meaning; this activity can be a useful frame as students practice analyzing visual sources alongside text-based documents.

This literacy strategy helps students to interpret Source 7, a poster advertising a July 1944 conference of the National Association for the Advancement of Colored People (NAACP), a leading civil rights organization. The strategy engages students in a multimodal (visual and textual) analysis of the flyer, through which they will practice noticing various types of text details and discuss how they work together rhetorically to create a call to action.

1. Provide context. This literacy lesson will have students working collaboratively to figure out the meaning of various pieces of the poster. Because students will improve their multimodal literacy skills by engaging in this effort, less context may be more here. For example, even if students are not already familiar with the NAACP, the poster includes the full name (National Association for the Advancement of Colored People), from which students should be able to determine enough of its purpose to understand the goals of the poster. It may be enough, initially, to simply tell students that these posters appeared in 1944 and have them briefly summarize what they know about what was happening in the country in 1944. Teachers may find they need to provide context as they go if, for example, students are not familiar with the concept of Jim Crow or if they are unable to recognize the Japanese Rising Sun or Nazi flags.

2. Interpret and discuss text. Use the Student Handout to guide students in a multimodal analysis of some of the components of the poster and how they work together to create a call to action. The handout asks students to consider three components of text: language, image, and text features (placement, bold type, capitalization, etc.).

Briefly explain and/or model each component of the worksheet so students have a sense of what to pay attention to for each part.

Give students time in pairs or small groups to talk through some responses to the prompts in each part and take notes as needed. (A pair or small group structure works best here to provide opportunities for verbal processing and collaborative inquiry while engaging as many students as possible in the task.)

Have students share out some of their observations for each section. Keep a class list on the board and add to it as needed. (See handout key for ideas.) As students share observations of what they notice (about image, text features, or language), push the class to think about why the authors of the poster might have made these choices and how they work together with one another. (See handout key for ideas.) After analyzing the three separate components, ask students to consider the last set of questions: What do you think are the goals of this poster? What message is the NAACP trying to send? Who might be the audience? You may choose to talk through these ideas as a class or in small groups before asking students to write individually, depending on how the class conversation has gone.

3. Extend the learning. To connect with current events and/or student experience, and to provide more opportunities for reading multimodal texts, writing, and speaking, consider these follow-up activities:

Using the same framework of looking at images, text features, and language, analyze some more current calls to action that contain a visual component (in the form of flyers, protest posters, web pages, etc.) about school, community, or national issues relevant to students’ lives. How are the techniques similar or different from those used in the 1944 poster’s call to action, “Come, let us take counsel together!”?

For practice with multimodal writing, have students collaboratively draft their own call-to-action flyers or posters about a national issue related to equality that they are interested in. For extra speaking practice, ask them to present and discuss their rhetorical choices.