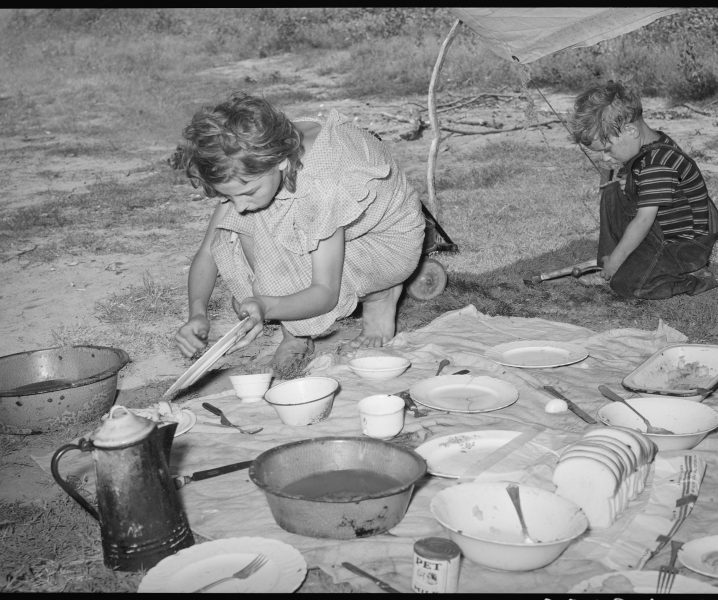 11.6 Ordinary People and the Great Depression

This inquiry set focuses on how ordinary people experienced the Great Depression. The sources concentrate on a relatively narrow topic — food — to expose much larger trends (like poverty, hunger, and government policy) of the 1930s.

How did ordinary people respond to the Great Depression?

The Great Depression affected American society and culture in profound ways. Students should consider How did ordinary people respond to the Great Depression? The effects of the Depression were worsened by the Dust Bowl, a result of natural drought combined with unwise agricultural practices that led to the dislocation of farmers who could no longer make a living from agriculture in the Great Plains. The famed Okies, portrayed in the literature of John Steinbeck and photographs of Dorothea Lange (among other artists of the 1930s), were pushed off their land and joined the significant migration of workers who came to California in search of work and opportunities only to find themselves treated poorly and in a continued state of economic turmoil.

In addition to migrant farmworkers faring poorly during the Depression, the trial of the Scottsboro Boys, nine black youths falsely charged with raping two white women, illuminates the racism of the period. The economic crisis also led to the Mexican Repatriation Program: a massive effort by government officials and some private groups to get rid of Mexicans, citing federal immigration law, the need to save jobs for "real Americans," and a desire to reduce welfare costs. The resulting repatriation drives were done in violation of individual civil rights. Scholars estimate that at least one million Mexican nationals and Mexican Americans, including children, were deported from the United States to Mexico; approximately 400,000 of them were from California. Many of those who were illegally "repatriated" returned home during World War II, joining the armed services and working in the defense industry.

The Great Depression and Dust Bowl crisis led to the disruption of millions of Americans' lives, with tens of thousands migrating to California in search of employment opportunities that were unavailable to them in the southern Great Plains states and elsewhere. California was marketed as a land of abundance to Americans before and during the Depression. Its agriculture industry served as an important leader in food production for the United States, which drew farmers and their families to the state. In stark contrast to this abundance, the economic devastation that many Americans faced during this period led to hunger and other forms of deprivation. Soup lines, hunger marches, and depictions of families without enough food to survive were common during this period. This inquiry set uses food production and consumption as a case study to investigate the inquiry question, How did ordinary people respond to the Great Depression? Through this lens, students will examine iconic sources from the period, such as John Steinbeck's The Grapes of Wrath and photos from Dorothea Lange and Russell Lee.

The source set includes two excerpts from The Grapes of Wrath. Source 1 describes the life of farming families during the onset of the Dust Bowl drought and its environmental and emotional toll on Americans. For sources 1 and 2, the push factors of drought and pull factors of opportunities for agricultural production help students understand the motivations of migrants in the 1930s. To better contextualize this Dust Bowl migration that Steinbeck describes, students can consider the map and the types of agricultural products produced in California. As students survey sources in this inquiry set, the teacher may want to develop a T-chart documenting the food produced in California and harvested by ordinary people and the daily diet of ordinary Americans that was described in songs, photos, and oral histories. Teachers could ask students to consider how individuals' consumption habits might explain race, class, and identity, and then use this discussion as a way to consider how we can define "ordinary" during the Great Depression.

Source 3 highlights the diversity of people who worked in the agricultural fields in California. The men pictured were all migrants who labored in California and were brought to the region by different circumstances. Students can consider this in juxtaposition to a secondary source about Mexican Americans and labor in Source 7. This source may be a good introduction to a later lesson on Mexican and Mexican American repatriation that occurred simultaneously in the Southwest, an event that revealed the extent to which many white Americans rejected appeals, like the Lange photos, to a racially egalitarian United States.

Sources 4, 5, and 6 highlight the relationship between food and economic status. Americans' food was central to the ways that they lived and thought of their cultural identities. Hunger and food insecurity during the Great Depression led to other consequences that are described in school and city reports about hardships on children (Source 6). Source 6 is further scaffolded in the literacy activity.

Sources 8, 9, and 10 highlight the ways that food (or lack of food) created community and bonds between people. In Source 8, The Grapes of Wrath breakfast scene at a migrant camp suggests the ways that the sensory experience of sharing a meal facilitated ties between strangers. Similarly, the charitable acts of funding a soup kitchen allowed schoolchildren to support and feed their community (Source 9). Finally, the hunger marches were an explicit way that citizens protested to make demands on a government that was not fulfilling its responsibilities to an impoverished populace (Source 10). Ending the source set with these sources offers students ways of understanding how suffering individuals and communities were able to reach across class, racial, and gender lines to work together to feed themselves and their families.

This literacy activity will help students comprehend and analyze Source 6 to use it as evidence to respond to the inquiry question, How did ordinary people respond to the Great Depression? This secondary source, "A School of Their Own: Educating Okie Children in 1930s California," integrates government statistics and oral histories to describe the life of migrant schoolchildren during the Great Depression. The structure of this article may challenge English learners. This activity will scaffold the source so they can use the evidence in the source to respond to the inquiry question.