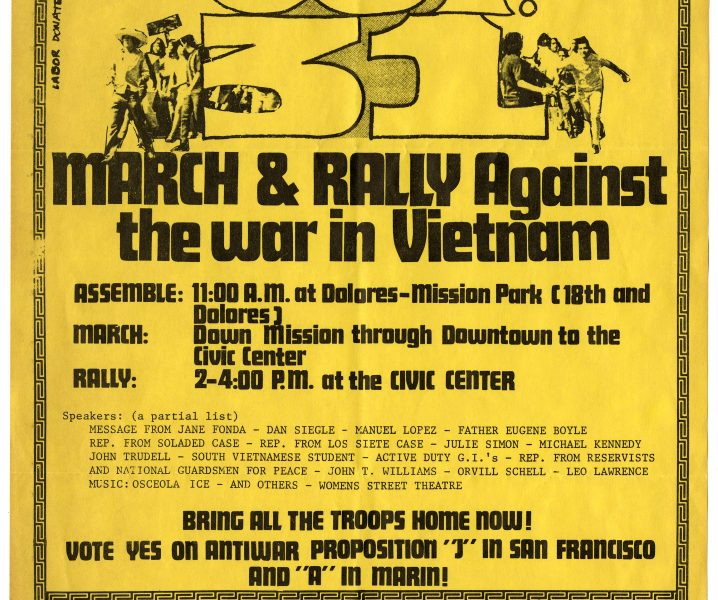 This inquiry set examines how the various movements for equality in the mid twentieth century built upon and inspired each other. The chosen material represents the movements against the Vietnam War and the civil rights movements of women, Chicanos/as, American Indians, Asian Americans, LGBT Americans, African Americans, and people with disabilities.

How did various movements for equality build upon one another?

The advances of the Black Civil Rights Movement encouraged other groups — including women, Hispanics and Latinos, American Indians, Asian Americans, Pacific Islanders, LGBT Americans, students, and people with disabilities — to mount their own campaigns for legislative and judicial recognition of their civil equality.

Students can use the question How did various movements for equality build upon one another? to identify commonalities in goals, organizational structures, forms of resistance, and members. Students may note major events in the development of these movements and the consequences. Students may study how Cesar Chavez, Dolores Huerta, and the United Farm Workers movement used nonviolent tactics, educated the general public about the working conditions in agriculture, and worked to improve the lives of farmworkers.

Students should understand the central role of immigrants, including Latino Americans and Filipino Americans, in the farm labor movement. This context also fueled the brown, red, and yellow power movements. The manifestos, declarations, and proclamations of the movements challenged the political, economic, and social discrimination faced by their groups. They also sought to combat the consequences of their "second-class citizenship" by engaging in grassroots mobilization. For example, from 1969 through 1971 American Indian activists occupied Alcatraz Island; while in 1972 and 1973, American Indian Movement (AIM) activists took over the Bureau of Indian Affairs building in Washington, D.C., and held a standoff at Wounded Knee, South Dakota.

Meanwhile, Chicano/a activists staged protests around the country, such as the famed Chicano Moratorium in Los Angeles in 1970 that protested the war in Vietnam, and formed a number of organizations to address economic and social inequalities as well as police brutality, and energized cultural pride. Students should learn about the emergence and trajectory of the Chicano Civil Rights Movement by focusing on key groups, events, documents such as the 1968 walkout or "blowout" by approximately 15,000 high school students in East Los Angeles to advocate improved educational opportunities and protest racial discrimination; El Plan de Aztlan, which called for the decolonization of the Mexican American people; El Plan de Santa Barbara, which called for the establishment of Chicano studies; the formation of the Chicano La Raza Unida Party, which sought to challenge mainstream political parties; and Rodolfo "Corky" González's "I Am Joaquin," which underscores the struggles for economic and social justice. California activists such as Harvey Milk and Cleve Jones were part of a broader movement that emerged in the aftermath of the Stonewall riots, which brought a new attention to the cause of equal rights for LGBT Americans. Asian Americans: The Movement and the Moment, edited by Steve Louie and Glenn Omatsu; The Latino Reader, edited by Harold Augenbraum and Margarite Olmos; and Native American Testimony, edited by Peter Nabokov, are a few of the readily available collections of personal histories and literature of a period of intense introspection and political activism.

Students also consider the modern women's movement by addressing the following question: How did various movements for equality build upon one another? Inspired by the Civil Rights Movement, the women's movement grew stronger in the 1960s. Armed with the Civil Rights Act of 1964, Betty Friedan, author of The Feminine Mystique, helped found the National Organization for Women (NOW) in 1966. Similar to the NAACP, NOW pursued legal equalities for women in the public sphere. Women's rights activists also changed laws, introducing, for example, Title IX of the 1972 Educational Amendments, which mandated equal funding for women and men in educational institutions.

On the social and cultural front, feminists tackled day-to-day sexism with the mantra "The personal is political." Many lesbians active in the feminist movement developed lesbian feminism as a political and cultural reaction to the limits of the gay movement and mainstream feminism to address their concerns. Throughout the 1970s and 1980s, feminists promoted women's health collectives, opened shelters for victims of domestic abuse, fought for greater economic independence, and worked to participate in sports equally with men.

Students consider Supreme Court decisions in the late 1960s and early 1970s that recognized women's rights to birth control (Griswold v. Connecticut, 1965) and abortion (Roe v. Wade, 1973). Students can debate the Equal Rights Amendment and discuss why it failed to get ratified. Students can also read and discuss selections from the writings of leading feminists and their opponents. Over time, students can trace how, by the 1980s and 1990s, women made serious gains in their access to education, politics, and the workforce, though women continue to be denied equal representation at the very highest ranks.

Students also examine the emergence of a movement for LGBT rights, starting in the 1950s with California-based groups like the Mattachine Society and the Daughters of Bilitis. Throughout the 1950s and early 1960s, these fairly secretive organizations created support networks; secured rights of expression and assembly; and cultivated relationships with clergy, doctors, and legislators to challenge teachings and laws that condemned homosexuality as sinful, sick, and/or criminal. In the 1960s, younger activists, often poorer and sometimes transgender, began to confront police when they raided gay bars and cafes in Los Angeles, San Francisco, and most famously at the Stonewall Inn in New York City in 1969. Organizations such as the Gay Liberation Front and the Gay Activists Alliance called on people in the movement to "come out" as a personal and political act.

Students may consider how a 1958 Supreme Court decision that rejected the U.S. Post Office's refusal to distribute a gay and lesbian magazine through U.S. mails (One, Inc. v. Olsen) and a 1967 Supreme Court decision that upheld the exclusion and deportation of gay and lesbian immigrants (Boutilier v. Immigration and Naturalization Service) relate to more recent decisions, such as the 1986 decision that upheld state sodomy laws (Bowers v. Hardwick), the 2003 decision overturning such laws (Lawrence v. Texas), 2013 and 2015 decisions on same-sex marriage (United States v. Windsor, Hollingsworth v. Perry, and Obergefell v. Hodges), and the constitutional guarantee of equal protection under the law for transgender individuals, as exemplified through successful claims of employment discrimination including Glenn v. Brumby, Schroer v. Billington, and the Equal Employment Opportunity Commission's decision in Macy v. Holder.

This inquiry set is designed to introduce eleventh-grade students to the various civil rights movements of the mid-twentieth century. Students will explore the goals, organizational strategies, forms of resistance, members, and achievements of the groups, noting both areas of commonalities and differences. The goal is for students to understand how the goals of these groups intersected and converged as they borrowed ideas, collaborated, and gained inspiration from each other. Ultimately students should gain a thorough understanding of the guiding question about how movements for equality build off of each other.

The documents and images in this collection include flyers and articles that highlight movements for equality in California associated with the LGBT community, Native Americans, women, Asian Americans, Chicanos/Chicanas, and people with disabilities.

Included here are step-by-step instructions for a problem-solving group work activity to guide students through a thoughtful exploration of these sources. This activity will help engage students in the learning and provide them an opportunity to interact with the sources in small groups in a way that further facilitates their processing of content while providing an opportunity for them to practice their analysis skills.

Suggested Active Learning Strategy
The instructor may wish to organize students in small groups and assign each group an individual document to analyze. Students should examine the assigned document, paying particular attention to word choice, associated images, and symbolism. The instructors should prompt students to consider:

After approximately 8 to 10 minutes, groups will swap documents and analyze a new document following the same process. This will continue until students have had the opportunity to analyze all six documents. The instructor should rotate around the room to check for understanding.

After the problem-solving group activity, ask students to choose a partner from another group. Working in pairs, students will discuss and process the information they learned by comparing their responses to the above questions. Ask students to refer to their textbooks and lecture notes to answer this question:

Following the whole class discussion, allow students time to pause for processing by individually reflecting on and recording their responses to the broader question:

Ask students to consider the continuance of these movements into the present day:

This literacy strategy helps students to interpret a flyer that advertises a march and rally against the Vietnam War. The strategy engages students in a multimodal (visual and textual) analysis of the flyer, through which they will practice examining various types of text details.