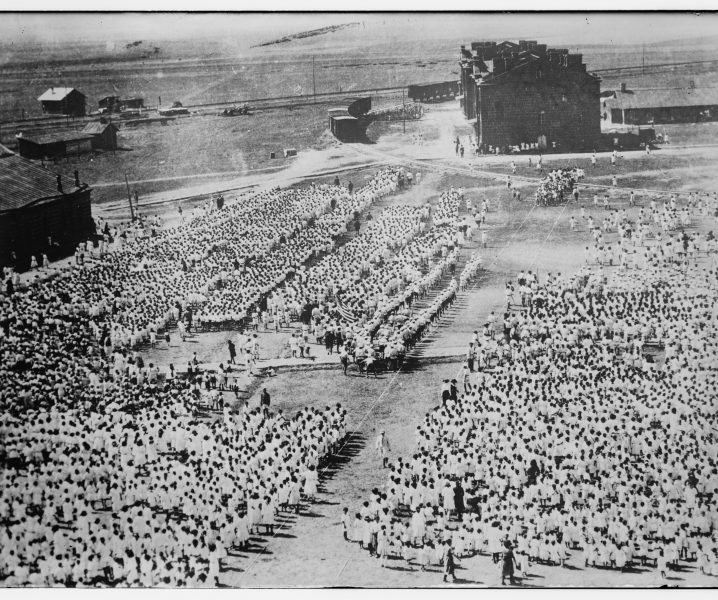 The mass killing of Armenians that took place in the Ottoman Empire during World War I was inspiration for the term genocide and international laws against it. This atrocity was the first genocide of the twentieth century. This set uses the United Nations Convention as a framework for analyzing the Armenian Genocide and delves into the perceptions of difference and wartime conditions that led some Ottomans to commit atrocities, and the responses of Armenians, foreigners, and other nations. The set concludes with the creation of early relief organizations in the United States in response to the genocide.

What were the consequences of World War I for the Armenians?

By 1918, 16 million military personnel and civilians had died and millions more returned home wounded; this toll was enlarged by that year’s deadly pandemic of the Spanish Flu. The Ottoman, Austro-Hungarian, and Russian empires had disintegrated and in their place new, independent states emerged, including Poland, Russia, Prussia, and Austria. In 1915, as the Ottoman Empire declined, the Turkish government carried out a systematic genocide against the Armenian population that had been living on its historic homeland in what is now eastern Turkey. Turkish authorities first arrested hundreds of Armenian political and intellectual leaders, sending them to their deaths; Armenian men were conscripted into work camps where they were killed outright or died of exhaustion. The remaining Armenians were ordered onto death marches into the Syrian desert, during which they were subjected to rape, torture, mutilation, starvation, holocausts in desert caves, kidnapping, and forced Turkification and Islamization. More than 1.5 million Armenians, more than half of the population, was eliminated in this way; virtually all their personal and community properties were seized by the government, and more than 500,000 innocent people were forced into exile during the period from 1915 to 1923. When the war ended in 1918, the Armenian population was reduced by 75 percent and their historical lands were confiscated by the Turkish government. Students may examine the reactions of other governments, including that of the United States, and world opinion during and after the Armenian Genocide. The Red Cross’s aid to Armenian Genocide survivors also demonstrates the worldwide humanitarian response to the crisis and the emerging role of the International Committee of the Red Cross as an international nongovernmental humanitarian organization. They should examine the effects of the genocide on the remaining Armenian people, who were deprived of their historic homeland, and the ways in which it became a prototype of subsequent genocides. To connect these multiple effects of war, students can consider the question: What were the consequences of World War I for nations, ethnic groups, and people?

The term genocide and international law against it was partially inspired by the mass killing of Armenians in the Ottoman Empire during World War I. The man who created the term genocide in 1943 or 1944 to categorize Nazi crimes against the Jews, Raphael Lemkin, read about Ottoman crimes against Armenians when he was a young man. This atrocity led him to realize the need for legal protection of groups on the international level.

Armenia had a long history as a Christian state, even when it was absorbed into other states and empires that were not Christian. It was actually the first state to adopt Christianity as its state religion in 301 CE. The Armenians had their own language and culture as well. The historical Armenian homeland is located in northeastern Anatolia or Asia Minor. However, from the fourteenth to the late twentieth centuries, Armenia was not independent, but ruled over by different Muslim states and empires. By the 1800s, Armenians lived in the Ottoman (Muslim) and Russian (Christian) empires. Whatever empire they lived in, Armenians remained Christian and culturally distinct from their neighbors. The Ottoman government ruled its subjects through the millet system. Ottoman subjects belonged to many different ethnic groups, and many were Christians, such as Armenians and Greeks. Each group was a separate millet that had some legal autonomy over schools, family law, and courts in exchange for paying additional taxes. The Armenians were the largest millet.

During the nineteenth century, the Ottomans abolished the millet system and adopted the principle of universal citizenship, which caused more tension and violence between ethnic groups. At the same time, nationalist ideas from Europe made their way into the multi-ethnic and multi-religious Ottoman Empire. This led the different people of the empire to identify more with their ethnic groups, which caused huge problems for the Ottomans, as it did for the Austro-Hungarians and Russians. Differences of religion, culture, and language became more and more problematic. It is important to emphasize that the ethnic/religious tension, violence, and genocide of the nineteenth and early twentieth centuries were not a continuation of Ottoman–Armenian or Muslim–Christian relations from the past, but a modern phenomenon produced by colonialism and nationalism.

Meanwhile the Ottoman Empire was steadily losing power and becoming more vulnerable to revolt. From 1821 to 1830, the Greeks successfully fought for independence and broke away. In 1878, the Ottomans lost the Russo-Turkish War. Armenian and Greek nationalists received support and encouragement from some European powers, such as Russia and Britain, that were interested in making the Ottoman Empire weaker (for their own political reasons). As the century came to an end, the movement for Armenian independence grew in strength and intensity.
In 1908, the Committee of Union and Progress (CUP), a party dedicated to reform and constitutional rule, took over power in the empire. Although this party was popularly known as the “Young Turks,” some Armenians also belonged, and it was not at first an ethnic nationalist party. But in 1913, three men — Mehmed Talaat Pasha, Ismail Enver Pasha, and Ahmed Cemal Pasha — took control over the CUP. (The final word of each name is a title for a high-ranking official, similar to “governor.”) As tensions exploded into World War I, these three leaders promoted anti-Armenian popular politics. They ordered a policy of Turkification, which decreed that all education would be only in the Turkish language; that all citizens had to be literate in Turkish; and that Turkish would be the only language used by the government administration. The Ottoman government began to publish propaganda charging that the empire’s Christian subjects, especially the Armenians, were enemies. It is important that students recognize that the resulting genocide was perpetrated by the Ottoman government, not by the Turks, and not by the Turkish government. As a state, Turkey did not exist at the time of the genocide. It is better to use “Ottoman” when referring to the state or government and “Turks” only for the ethnic group.

In World War I, the Ottoman Empire joined Germany and Austria-Hungary against the Allied Powers. The Armenian homeland was right along one of the fronts in that war, in eastern Anatolia and the Caucasus, between the Ottoman Empire and Russia. The political climate created by war gave the Ottoman government both an opportunity and an excuse for persecuting Armenians. Propaganda charged the Armenians with betraying the Ottoman Empire and siding with Russia. In spring 1915, the Ottomans began violently rounding up, deporting, and killing their Armenian subjects. The estimated number of victims ranges between 664,000 and 1.5 million dead, either in mass murders carried out by Ottoman forces and irregular bands, or during the deportations and death marches through the Syrian desert. Other Armenians were forced to convert, and Armenian women and children were forced to join Muslim households. By international law, these acts of forced assimilation are also genocide, even when the Armenians went along with the assimilation in order to survive. Moreover, this survival mechanism failed in many cases, as the converts were later mistreated or even killed. The Ottoman government not only aimed its genocidal policies at the Armenians but also applied them to other Christian minorities within the empire, primarily Greeks and Assyrians.

Western diplomats, missionaries, journalists, and others thoroughly documented the events at the time, which created widespread wartime outrage in the West against the Ottomans. The American ambassador in Istanbul, Henry Morgenthau, was extremely vocal about the Ottoman atrocities and secured substantial news coverage of the genocide in the United States. He was also one of the founders of American charity organizations to aid Armenian orphans and refugees. It was the first major nationwide philanthropic effort and the beginning of an international humanitarian movement led by the United States.

While Armenian genocide in the Ottoman Empire happened more than 100 years ago, it remains one of the most politically charged topics in history, since Turkey denies the genocidal nature of Ottoman actions, and many countries do not officially recognize the events of 1915 – 1923 as genocide. In April 2021, the United States officially recognized the Armenian Genocide. Most historians regard it as the first modern genocide.

Teacher background: The Alleged Text of the Ottoman Government’s Proclamation Ordering the Deportation of the Armenians is confusing to the reader because the sentences are long, the vocabulary is euphemistic as well as unfamiliar, and the writer intended to obscure the government’s responsibility through coded references. To help students understand the proclamation’s text and, more importantly, think about the historical significance of the piece, the text has been broken down into its functional parts, followed by questions to spur further thinking and discussion.

As in other twentieth-century genocides, it is important to avoid conflating all of the Turkish people with those officials of the Ottoman Empire and other men who actually perpetrated the genocide. In fact, the modern Turkish government is completely different from the Ottoman government of 1915 – 1916. Students should understand that the Armenian genocide was only the first of multiple genocides in the twentieth century, and that it is not an issue of the Turks against the Armenians, or Muslims against Christians, although many people both then and now see the genocide in these terms. Emphasize the heightened tensions of wartime, identification of two groups as us and them (or proper Ottomans and the others), propaganda, and the role of politicians (the three pashas) who saw an opportunity to increase their power and control over Ottoman people.