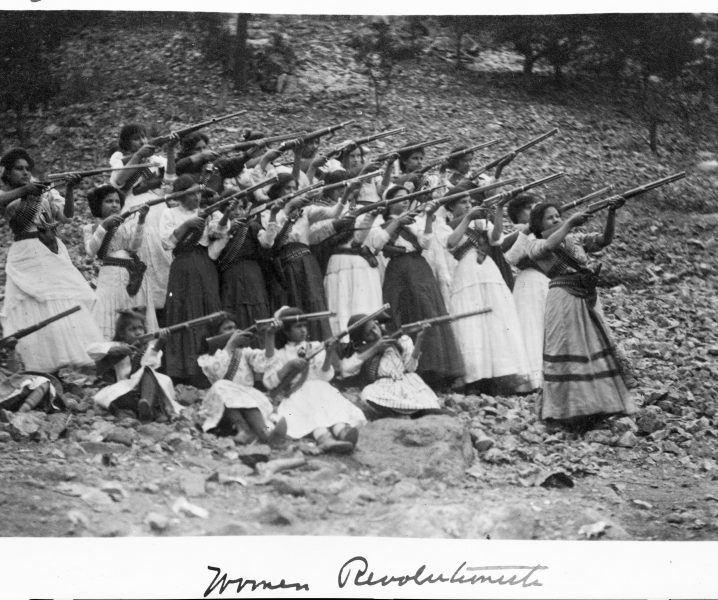 10.4b The Mexican Revolution

This set provides sources from multiple perspectives on the Mexican Revolution, the defining event of modern Mexican history. The economic policies of Porfirio Díaz, unequal distribution of land, deeply entrenched economic inequality, and undemocratic institutions were the major causes of the revolution. Its primary effects were mass participation of people in competing groups; resistance from peasants, workers, Indians, and mestizos; brutal civil war for ten years; and some reform and stability at the end with the Constitution of 1917. The set’s focus is on two specific aspects of the revolution: the struggle over land reform, and the identities, ideas, and perspectives of major participants.

What were the causes and effects of the Mexican Revolution?

Although most Latin American nations were technically independent in this era, they often came under the influence of European nations and the United States after accepting large loans to help them develop transportation and communication networks. Latin American countries produced cash crops and mined raw materials in exchange for cheap goods, which disadvantaged local industries. The inequality produced between wealthy and poor states was mirrored by growing divisions between "haves" and "have nots" in many of these societies.

These tensions led to revolutions in Mexico and elsewhere with leaders competing over liberal and Marxist visions for their nations. Given students' close proximity to Mexico, they might wish to focus on Mexico's experience during the era of imperialism and learn about its revolution in the context of colonization. Students can address the question What were the causes and effects of the Mexican Revolution? After teachers briefly review Spanish conquest, Mexican independence, and the decades-long leadership of Porfirio Diaz, with an emphasis on race and land ownership, students should learn about the high percentage of land and resources that were owned by foreign investors (mainly American) in the early twentieth century.

Next, teachers might wish to explain the experience of the ordinary people like the campesinos and show art from the era such as Diego Rivera's Repression. Teachers should divide the class into five groups that are each assigned a unique perspective and primary-source document from the period: (1) Porfirio Diaz; (2) moderates (represented by Madero, Huerta, and Carranza); (3) Emiliano Zapata and campesinos of the South; (4) Pancho Villa and the vaqueros of the North; (5) The United States.

To locate the sources that represent each of these perspectives, teachers can search online for the "Plan de Ayala"; "Pancho Villa's Dream"; and consult Lucia Nunez's Episodes in the History of U. S. –Mexico Relations as well as John Guyatt's The Mexican Revolution. After each group has identified the perspective and goals assigned to it, the whole class should discuss areas of agreement and disagreement between groups, while the teacher charts them on the board and students take notes.

The Mexican Revolution is the defining event of modern Mexican history and has provided a touchstone for political and cultural life throughout the twentieth century. Deeply entrenched economic inequality and undemocratic institutions provided favorable conditions for a wide-scale revolt. Although Mexico became independent from Spain in 1821, a majority of Mexicans suffered during the nineteenth century as a result of political chaos and foreign intervention. The last decades witnessed the rise of Porfirio Dίaz. Dίaz's plan was to modernize Mexico by promoting foreign investment and making the country produce for international markets. He thus granted concessions for land use and mining rights to wealthy landowners and entrepreneurs and to US and European companies. In the process, he confiscated communally held land from peasant communities (ejidos. ) His corruption, favoritism, and dictatorial rule led to resentment by many upper- and middle-class Mexicans. They were educated, white or light-skinned landowners and professionals who resented the lack of democracy and opportunity, but considered themselves superior to the Indian and mestizo masses (Sources 1 and 3). Following the concept of the hierarchy of races, assumed by most intellectuals of the period, they believed that as white descendants of Europeans, they were the natural superiors of the Indians and mestizos.

Francisco Madero (Sources 2 and 3) ran against Porfirio Díaz during the presidential election of 1910. Madero agreed with Díaz's efforts to modernize the country but believed that Mexico was ready for a more democratic system (based on universal male suffrage. ) Madero was a political liberal who belonged to one of Mexico's richest families. Although Madero campaigned widely, Díaz ultimately jailed him and stole the election. Madero then fled to the United States and called for a revolution. Eventually, the revolution succeeded in toppling Díaz after 34 years in power. Although Madero instituted democratic reform as the new president, his program did not go far enough in the eyes of many who had supported him, especially in regard to land redistribution.

A major cause of the Mexican revolution was unequal distribution of land (Sources 1 and 9). Wealthy white landowners had owned vast estates since Spanish colonial times and increased their holdings during the Porfirian era. Foreign investors also came to control large estates. In the meantime, Indians and mestizos who had small plots of land, or who worked on communally held lands or ejidos, often lost their lands. By the early years of the twentieth century, most peasants (campesinos, or the more derogatory term, peons) were dependent on pitiful wages from wealthy landowners. The pressures of the growing international market economy meant that smaller peasant farms were increasingly unable to compete with the large estates, or haciendas, of the wealthy. When Dίaz began privatizing untitled lands and confiscating ejido land, popular resentment boiled over. Workers in the cities and towns, suffering also from low wages and harsh conditions, were similarly discontent. In 1910, popular uprisings spontaneously broke out in many parts of the country. Over the next ten years, peasant armies, led by Pancho Villa in the North and Emiliano Zapata in Morelos and the South, attacked wealthy landowners, destroyed haciendas, and redistributed land, defying the orders of the liberal governments of Madero, Carranza, and others.

The differing perspectives of the major participating groups meant those who had mobilized against Díaz did not agree on the purpose of the revolution or on its policies on land. This set provides sources to analyze the perspectives of four major groups. The first group was the wealthy landowners who supported Díaz (Source 1). The second group was upper- and middle-class people (mostly light-skinned) who wanted liberal democratic political change and supported Madero, Carranza, and Obregón, but not the land confiscation and social revolution that Zapata advocated (Sources 2 and 3). A third group was Indian and mestizo cowboys and rural poor of northern Mexico who wanted land or access to wealth and power and supported Villa (Sources 4, 5, and 8). The final group was Indian and mestizo campesinos, or peasants, in the South, who wanted more ejidos for their communities and supported Zapata (Sources 9 and 10). Although this set does not include the shifting power rivalries between leaders, the role of the United States, or the role of urban laborers, it allows students to probe deeply into the intersection of race, class, and aspirations in revolutionary Mexico.

One effect of the revolution was a brutal extended war. Rival armies held different parts of the country and engaged in guerrilla warfare and occasional large battles against each other. The countryside was devastated, and almost 1 million Mexican people were killed (from a total population of 15 million. ) Many others fled over the northern border into the United States. All of the major leaders, except Obregón, were assassinated. Writers mythologized Villa and Zapata as folk heroes (Sources 8 and 10).

Another effect is that large numbers of women, called soldaderas, joined the armies, and many fought as soldiers (Sources 6 and 7). The central importance of these women to the war effort is documented in corridos (popular songs) and in black-and-white photographs. Their political and military activities did not lead to increased rights for women, and their contributions were long ignored after the revolution. Nevertheless, documentation of these women's participation attests to their involvement in the revolution as more than just victims.

Resistance from below forced political leaders to accept demands for genuine democracy, preservation of peasant communities, and land reform. The Constitution of 1917 (Source 11) authorized the redistribution of land and water from large estates to poor communities and created new ejidos of communal village holdings protected from alienation. It gave protections to workers that were revolutionary for the time and also granted extensive rights to trade unions. However, these ambitious goals were often not carried out; despite that, one of the enduring accomplishments of the revolution was stability. There has not been another large-scale social revolution in Mexico since.

Literacy Support for Luis Cabrera, The Mexican Situation from a Mexican Point of View (Source 1) and the Constitution of 1917 (Source 11)

Teacher Background: This literacy strategy explains the concept of land reform, or redistribution of land, which was central to the Mexican Revolution. The terms land reform and redistribution of land are examples of nominalization, a common linguistic pattern of history and the social sciences. Nominalization refers to the pattern of making a single noun or noun phrase stand for an entire complex process. To the historian, use of the term triggers a whole series of associations and understandings. It's quite useful for teachers to point out to English learners how nominalization works and help them unpack the complex process behind a simple nominalization. This strategy is designed to help English learners and those who read below grade level comprehend the meaning of complicated passages from the first and last sources that explain the associations and understandings related to the terms land reform and redistribution of land.