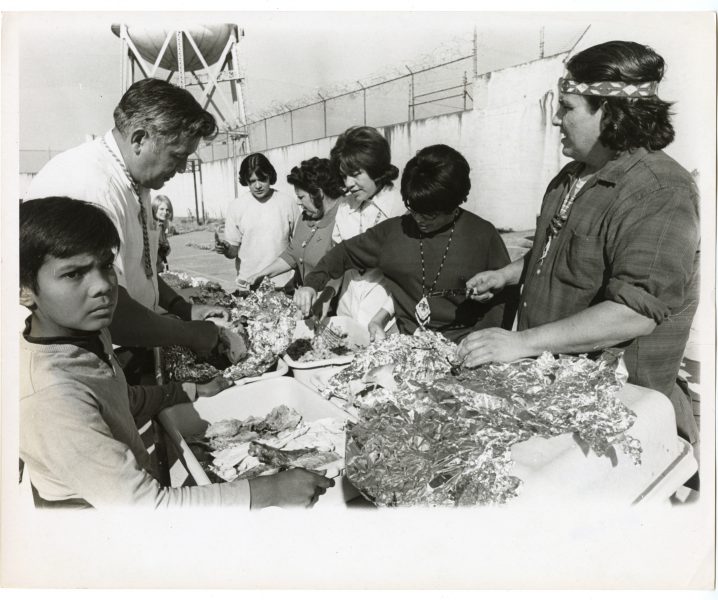 10.4 The Response of Native People in California to Colonization

This is a case study of the colonial enterprises of Spain and the United States in California. It forces on the continuous resistance of Native peoples from the eighteenth century to the present.

How did Native people respond to colonization?

Students may continue to consider the question How did colonization work? in order to understand the concrete results of colonization in a variety of geographic contexts. Colonizers introduced new infrastructures, medicines, educational systems, and cultural norms. Print technology and more rapid transportation aided the growth of organized religion. … Christian missionaries made use of colonial institutions and infrastructure to educate and evangelize native peoples, helping to broaden Christian presence around the world….

Although some colonial peoples converted to European practices, others deeply resented the violent exploitation of their people and the disruption of their traditional beliefs. Students should consider the question How did native people respond to colonization? in order to make sense of the multiple contexts and responses to colonization. Nationalist leaders, often educated in European universities, began to use ideologies rooted in the Enlightenment to challenge the injustice of Western and Japanese imperialism. Europeans, in turn, were shaped by their encounters with colonial peoples through their exposure to non-Western religions and systems of thought for the first time. Imperial encounters strengthened European nationalism at home, as colonizers defined themselves in response to colonial “others.”

Colonialism in California began as soldiers, priests, and civilians traveled from Spain into northern Mexico to settle the northern frontier by planting presidios (forts), missions, and pueblos (towns). In 1769, Father Junípero Serra began the Sacred Expedition, traveling up the coast of Baja California and reaching the Kumeyaay villages of present-day San Diego. The Spanish wanted to keep this region free of other colonizing powers, like the British and the Russians. The Spanish were also interested in spreading Catholicism; with that aim, Serra established the first mission in Alta California. The Kumeyaay initially attacked Spanish soldiers and posed a threat to the fragile colony. Spanish animals ate Native foods, and Spanish law required Indians to work for colonial masters, building churches, barracks, and roads. With guns, horses, and the conviction that their God had blessed their presence in California, the Spanish successfully fought off Indian attacks. Colonial powers forced non-European, non-Christian people to work for them. The exploitation of others through imperial rule and colonialism was much a part of all colonial projects. The results benefited immigrant communities and severely harmed indigenous people. European colonial policies resulted in disease, death, and cultural destruction, which is evident in many California Indian communities today, just as indigenous people around the world continue to suffer the ravages of European and American imperialism and colonialism. This case study of the efforts of two colonial powers to colonize the California Indians and their continued resistance over the centuries connects the earlier period of European expansion and colonization to the nineteenth-century era of New Imperialism and to the present day, by reinforcing for students the fact that imperialism did not end with World War I. This case study also provides students with a relevant example that takes place in familiar territory. Because the historical context is familiar, they should more easily grasp the projects of imperialism and native resistance, particularly the ways in which native peoples persisted in claiming their own identities despite centuries of colonial pressure. One way that colonized peoples all over the world resisted imperialism was through revolt or warfare. As the written sources 1 and 2 emphasize, colonizers could treat the colonized Native people quite brutally. While Father Junípero Serra and the Franciscans saw their mission as peaceful and beneficial, they brought with them soldiers who attacked Indians, sometimes in defense of the missions and sometimes to carry out the orders of the priests. Indians who used armed resistance against the Spanish were angry not only at the specific incidents that immediately triggered their violence but also at stringent attempts to convert them to Catholic Christianity and European culture; the appropriation or destruction of their land, water, and food sources; the disruption of their culture and religion; forced resettlement; and compulsory labor. More than 100 years later, in the Modoc War of 1872, some Indians were still actively resisting. This resistance had parallels in other parts of the world. The native populations in Africa, Asia, Latin America, and the Pacific used violence to resist their colonizers. Because of the high mortality (85 percent) of native peoples in the Americas and on some Pacific islands to diseases introduced by the colonizers, opposition by the natives was rarely successful. However, scholars point out that the continued resistance of colonized peoples even when they were being offered religious salvation, medicine, literacy, and other fruits of European civilization ultimately forced some in the imperialist nations to question their nations’ involvement in the “civilizing mission.” Although California Indians were severely constrained by the loss of land, the transformation of their environment, and the impact of colonial markets and institutions, some sought to maintain their own cultural traditions, communities, and economic practices. Other Indians willingly adopted Christianity and welcomed the cultural changes offered by the colonizers. Often these were individuals without high status in their Native societies, who enjoyed education and new positions of responsibility. The promise of inclusion in white society, however, always ran into limits; those who could claim pure European descent dominated colonial society. Ultimately, Europeans used racial theories of the nineteenth and early twentieth centuries to justify their subordination of Indians and other native peoples. But with the decolonization movement of the 1960s and its counterpart in the United States, the civil rights movement, Indians resisted by using the very tools of imperialism — Western culture and education — to expose the violence and injustice against their ancestors and claim a refashioned Indian identity. Since the mid-nineteenth century, California Indians have been a small portion of the state’s population. Just as in other colonies with large numbers of settlers from the metropole, such as South Africa, Australia, and Algeria, the colonized Indians were marginalized economically. Indians who tried to hold onto their lands and economic practices found that agriculture, ranching, and the influx of settlers into California destroyed the food sources that they needed to survive. As in the rest of the United States, white settlement led to the restriction of Indians to reservations, without adequate resources. Despite overwhelming odds against them, Native Americans in California still claim Indian identity as they continue to resist efforts to marginalize them. This persistence is also a type of resistance.

The Alcatraz Proclamation was published by the Indian occupiers of Alcatraz Island in 1969. The author(s) used quotations from treaties that the US government had contracted with Indian tribes in the eighteenth and nineteenth centuries in a heavily ironic manner to make a symbolic point, embarrass the US government and white Americans, and draw attention to the injustices done to Indians both historically and at that time. Because students will not be familiar with the precise language of those treaties, they will have difficulty grasping the irony. This literacy strategy makes the structure of the text explicit, explains irony, and provides the historical references to help students grasp the irony and restate it in their own words.

2. Explain the background of the Alcatraz occupation in 1969 and define irony. Give students an example of an ironic comment (such as saying “I’m great!” when you are really sick),, so that they understand the concept.

3. As a class, read the background section and complete part A. together. Make sure that students understand that the author did not use the terms “re-claim the land” and “discovery” in a straightforward manner. Instead the author was deliberately echoing the terms used by older Eurocentric textbooks. The historical reference section is secondary information to help remind students of the relevant details they may have forgotten from earlier grades. Once students have filled in the blanks, they should understand that the author was mocking those textbooks. Once that is established, have student groups discuss the irony question. Have the student groups share their answers and make sure that everyone understands the irony.

4.  Have student groups complete the rest of the handout. Review as a whole class. Write on the board good examples of analysis.

10.4 The Response of Native People in California to Colonization Literacy Activity, Student Handout

10.4 The Response of Native People in California to Colonization Literacy Activity, Teacher Key