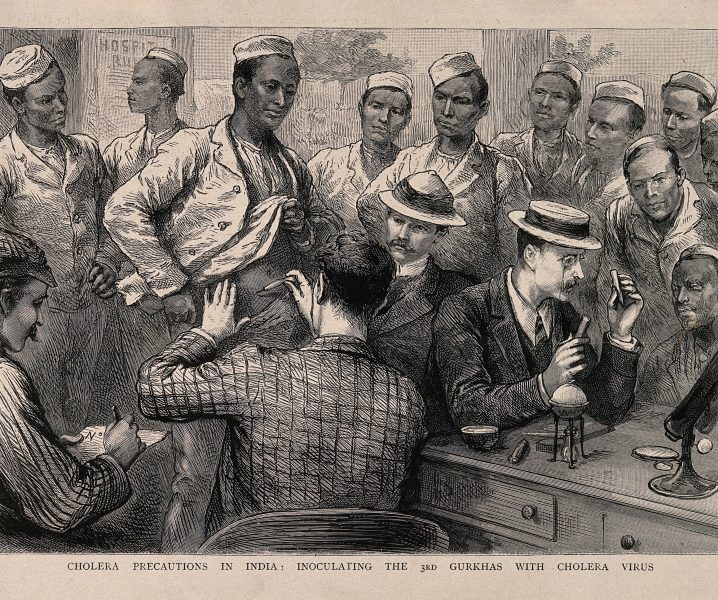 10.3 Cholera in Britain and Its Colonies

This source set supports a case study of the effects of the Industrial Revolution. It treats industrialization and imperialism as two interconnected developments, with primary sources from both the metropole, London, and the colony of India. The case study of cholera highlights the multiple results of industrialization and urbanization, such as sanitation issues and the divide between rich and poor. Advances in technology and knowledge during the period vastly improved medical treatment for cholera, which was in turn a justification for imperial control over India and an impetus for increased state control.

What were the results of the Industrial Revolution? How was technology and the environment transformed by industrialization?

In addition to its historical significance, the Industrial Revolution also provides rich opportunities for students to develop their geographic and economic literacy. Students can consider What were the results of industrialization? in order to come away with a broad overview of how many aspects of life were transformed by industrialization. Britain was the first nation to industrialize. . . . The inventions and discoveries of James Watt, Eli Whitney, Henry Bessemer, Louis Pasteur, Thomas Edison, and others resulted in advances in science and technology. Agricultural and scientific improvements allowed for a more urban and healthy population. Advances in medicine led to an increasingly institutionalized and professionalized medical establishment, which led to an increasing understanding of early germ theory. These new technologies and ways of understanding the world soon spread beyond Western Europe to the United States and Japan, so that knowledge was shared worldwide. . . .

This source set supports a case study of the effects of the Industrial Revolution. It treats industrialization and imperialism as two interconnected developments. This approach is highlighted through the inclusion of primary sources from both the metropole, London, and the colony of India. Across the world, industrialization and urbanization occurred hand in hand. Before beginning this inquiry, students should know about urbanization in Britain. The proportion of people living in urban areas increased rapidly as they moved from the countryside to the towns and cities in search of work in factories. As a result, urban spaces became overcrowded, and crucial infrastructure — such as water supply and sewage works — was unable to keep up with the increasing number of dwellers. Cholera, a disease that spreads through the drinking of dirty and contaminated water, was a major problem in Britain's industrial centers throughout the nineteenth century.

The case study of cholera highlights the multiple results of industrialization across the nineteenth century. The sources provide evidence of the problems created by urbanization and rapid industrialization, such as sanitation issues and the divide between rich and poor. The advances in technology and knowledge during the period vastly improved medical treatment; two of the period's great achievements were the discovery that cholera was caused by water contaminated by poor sanitation (John Snow, 1854) and the invention of a vaccine by Waldemar Haffkine in 1892. The sources give evidence of the use of statistics and the development of sewage systems and other infrastructure to support public health, showing not only medical advances made during this period but also the growing role of the state in regulating human interactions through infrastructure, medicine, and knowledge production. These sources also highlight the complex relationship between industrial Britain and India, one of its colonies. The first global pandemic of cholera began in Bengal, India, in 1817. Unwitting victims, such as British soldiers, carried the disease bacteria along travel and trade routes. At that time, Bengal was the center of the colony ruled by the British East India Company. When the disease reached Britain, it was then further spread not by Indians, but due to the poor sanitation in London and other industrial cities.

Teachers who want to frame the solutions to the disease of cholera as one of the positive results of industrialization can emphasize the development of knowledge and new academic methods used in this period to better understand and try to solve industrialization's ills. One of these was the rise of statistics, and the introduction of data as a means of understanding the world and its problems. Statistics methods were incredibly important in identifying contaminated water as the means by which cholera spread. Dr. John Snow, a London physician, pioneered the research into the relationship between cholera and drinking supplies. By observing where the outbreaks occurred and cross-referencing where people lived with their water supplies, he came to realize the connection.

Industrialization accelerated urbanization, which caused new problems and led to strategies to solve those problems. During this process, the people or institutions that had authority also shifted. The prestige and authority of doctors and scientists rose, middle-class people developed concepts of duty and responsibility to the poor, and, on the advice of scientists and experts, the state created many more institutions and projects to implement proposed solutions, such as the Thames embankment. The state grew as a result and intervened directly into ordinary peoples' lives. The consequences of academics' and politicians' efforts led to specific strategies that improved the health of urban dwellers in London as well as individuals in the farthest reaches of the British Empire. If India was the source of the illness, then Britain and (by extension) European culture was the cure. This approach framed Empire as an act of kindness through the spread of medical knowledge, but it masked other more harmful consequences of industrial empire, such as the exploitation of local populations and the extraction of raw materials.

To highlight the change in the ways that Britons understood disease, its spread, and how to control outbreaks, teachers and students may want to develop a timeline as they read the sources to consider change over time and the pattern of cause and effect through each of these historical moments. For Source 5, "The Thames Festilence, " a newspaper article, there is a literacy strategy that breaks down its sophisticated vocabulary for English learners and those who read below grade level. The second handout is a final activity in which students can directly compare this change over time by studying the two posters, or broadsheets.

Teacher Background: "The Thames Festilence" is an article published in a London newspaper in 1858. The newspaper aimed at an educated, middle-class audience that had a wide vocabulary. The author used a variety of synonyms and vivid language to create a (disgusting) mental picture of the Thames River in the heat wave of 1858. The following literacy activity helps English learners and those who read below grade level to decipher the meaning of the excerpt and also teaches them additional vocabulary.