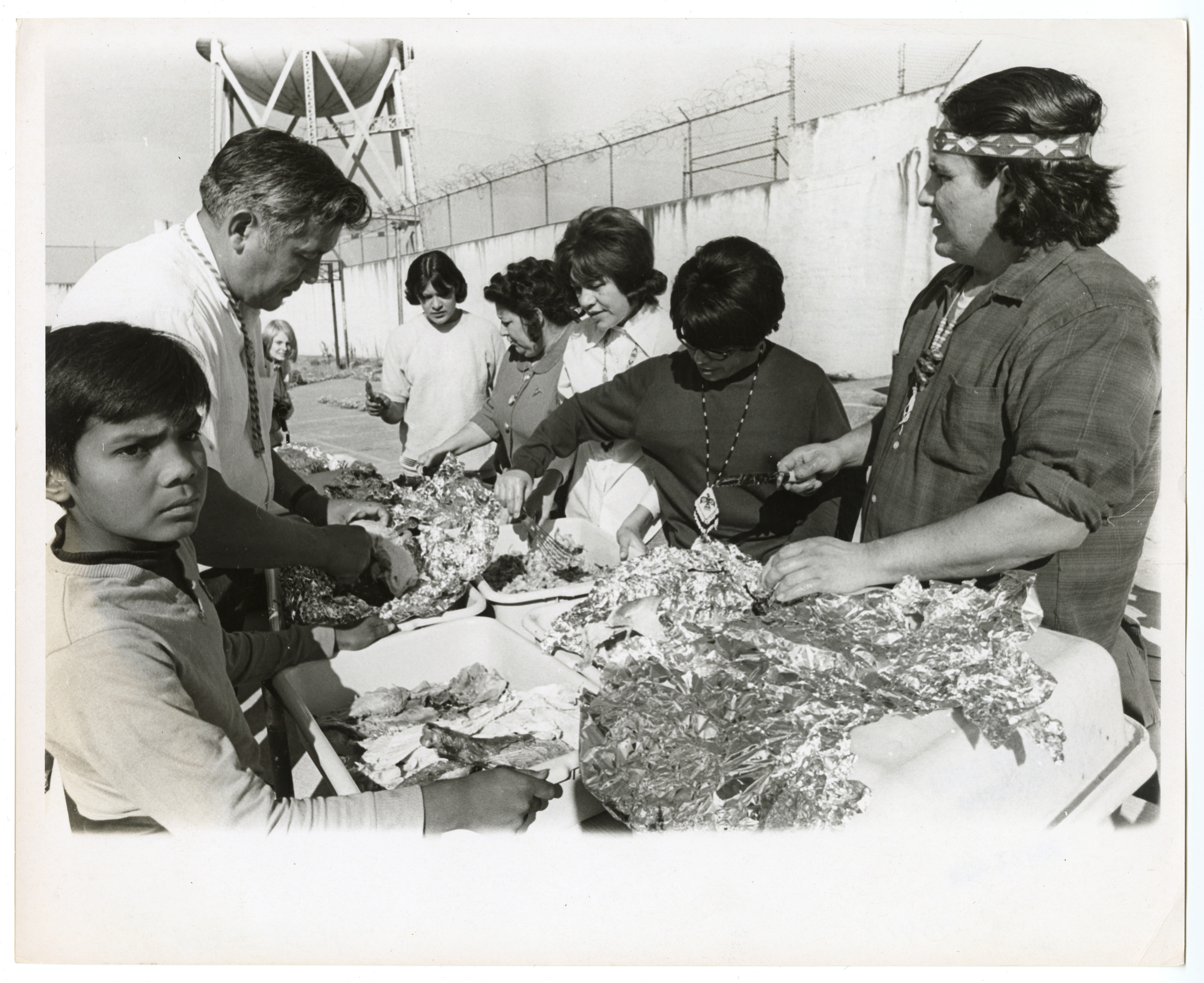 Native Americans on Alcatraz Island during the 1969-1971 occupation to reclaim native land.  Photograph courtesy of the California Historical Society.

This blog is reposted from the California History-Social Science Project’s blog. The original post can be found here.

Editor’s Note: As we travel around California, one of the most frequent concerns we hear from teachers is that they don’t feel prepared to teach students about the history of California Indians. Elementary teachers have explained that they don’t know enough about pre-contact California, especially the history of indigenous people in their local area. Eighth-grade teachers reflect that their current resources are incomplete and don’t fully document the perspective of native peoples during the 19th Century. And high school teachers often remark they don’t have anything on native history after 1900. We’ve heard these concerns and in response, we’ve brought together a new team of scholars and members of native communities to design a workshop specifically focused on teaching the history of California Indians. Historians Shelley Brooks and Michelle Lorimer will lead the workshop, aided by the important scholarly contributions of Benjamin Madley, Steven Hackel, Clifford Trafzer, Khal Schneider, and Gregg Castro. This workshop will debut at our new Framework Conference series, which starts on September 10 at UC Irvine. Read below for a special blog post about the workshop, and learn more about the Framework Conference series here.

In West Sacramento last month, Governor Gavin Newsom issued an executive order to apologize for California’s treatment of its Native population. As the governor explained, “That’s what it was, a genocide. No other way to describe it. And that’s the way it needs to be described in the history books.” In our new workshop, “Highlighting Native Californian History through the Framework,” we hope to guide teachers through this important, honest, and troubling investigation of California’s history.
California’s History-Social Science Framework calls for more complex examinations of California Indian history across grade levels and time periods. Our workshop will focus on ways to incorporate the history and culture of Native Californian peoples into lessons at both primary and secondary levels. Lessons that explore California Indian history provide teachers with unique opportunities to connect students with local history and contemporary Native communities that, historically, have been frequently misrepresented and not consulted in public representations of their groups.

Teaching about the history of California Indians also allows students to explore interdisciplinary themes that span the various fields of social and behavioral sciences, including history, geography, economics, civics (political science), anthropology, religious studies, and psychology. Investigations that focus on the lives of Native Californians both before and after foreign contact highlight important historical thinking strategies. Students learn to understand diverse perspectives, evaluate historical evidence, recognize continuity and change, assess cause and consequence, and unpack ethical considerations of the past.

We will investigate the experiences of Native peoples during transitional times in California’s history—guided by the major instructional shifts in the Framework. We will use inquiry to investigate primary source content from pre-contact, the California mission era, the Gold Rush, and the modern civil rights era. Teachers will receive classroom-ready materials for grades 3 (local history), 4 (California history), 8 (19th-century U.S. history), 10 (modern world history), 11 (modern U.S. history), and 12 (government). Many of these resources will come from our partnership with the California Historical Society and our shared Teaching California project, which will debut later this year.

Written by Michelle Lorimer, Ph.D., an historian and lecturer at California State University, San Bernardino, Shelley Brooks, Ph.D., and Beth Slutsky, Ph.D., who are both Program Coordinators at the California History-Social Science Project. 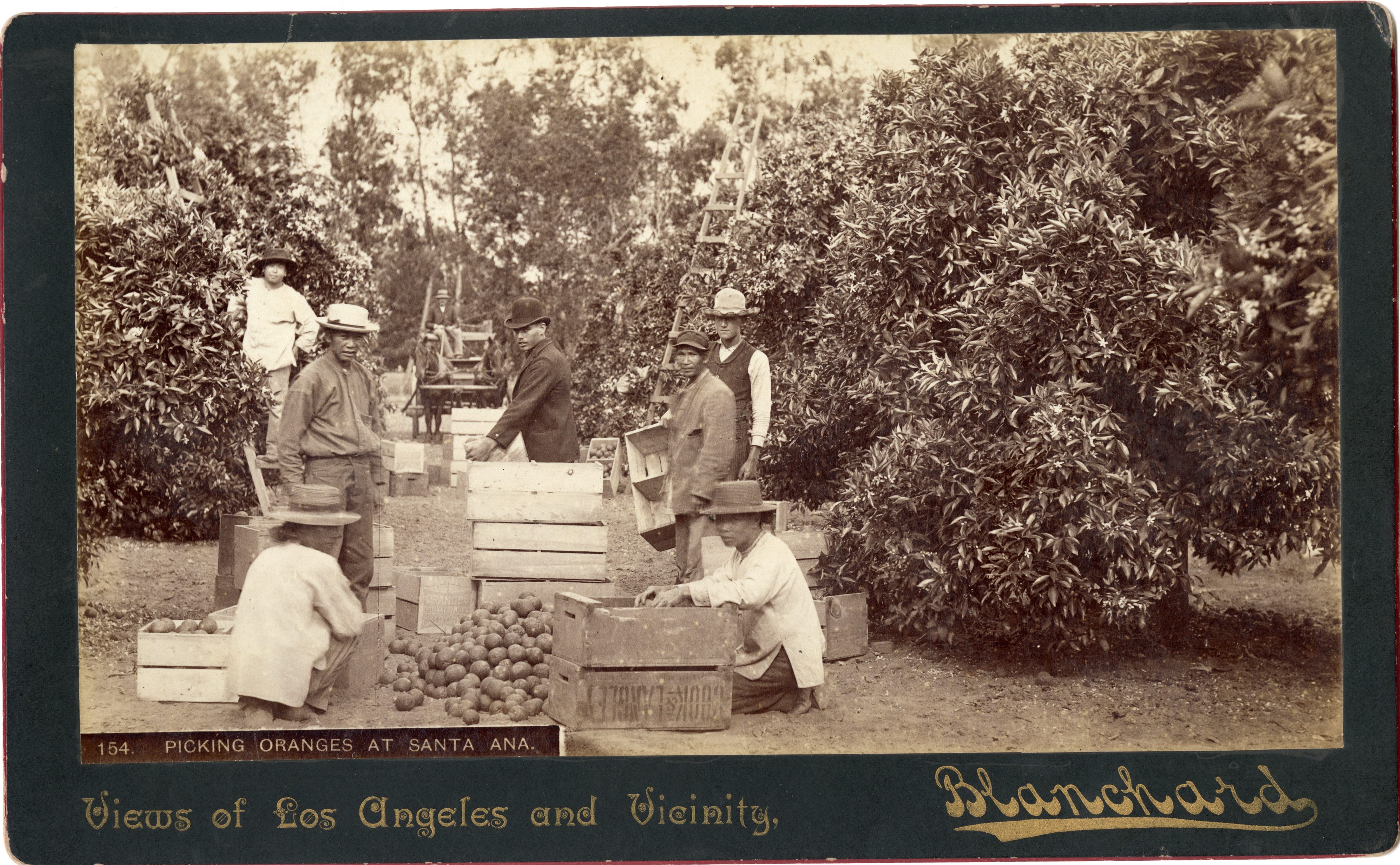 “Stare. It is the way to educate your eye and more. Stare, pry, listen, eaves-drop. Die knowing something. You are not here long.”

Looking is hard work. For many of us, sight is the most obvious tool we use to experience our world; it feels easy, automatic, almost like breathing. But to look—to take time, to probe, to take seriously the ways in which images shape our worldview—is a different matter.

As children, we are taught to read words when we are only a few years old. And yet, modern technologies make it so that we are increasingly inundated by pictures more than text, be it on our screens, in print media, as family photographs, or as advertisements. Moving through the world, it is tempting to merely glance at the pictures we encounter, letting them coalesce into a sort of landscape or wave that washes over us and passes us by. But pictures are made by people, and so often convey the ideals, biases, and political views of their makers. However subconsciously, the images that we see every day combine to shape our own biases and political views. “What you see often becomes a part of your memory,” explains Ana-Christina Ramón, the assistant director of the Ralph J. Bunche Center for African American Studies at UCLA, “and thus a part of your life experience.”

When we look closely and think about what we see, it allows us to be less immediately manipulated by the visual rhetoric of the media that we consume. But as with any good book, reading images closely can bring us an immense sense of pleasure and empathy. Imagine standing in front of your favorite painting, and taking the time to think about what emotions or forms its brush strokes evoke. Try to imagine what the artist was thinking and feeling when she put the brush to canvas, and where she was standing; think about what the painting conveys about the era or place in which it was made. With these thoughts, we do not lose sight of the work’s initial beauty. Rather, we can take in this beauty, or pain, or anger and confusion, while also asking ourselves what it is that allows the art to make us feel so strongly. We can come to the work with a sense of humility, but also thoughtfully.

I’m going to walk you through some questions I ask myself when I first look at a photograph, painting, or illustration, in the hopes that you will continue to look closely at the pictures that you encounter—be it in the museum, or on your phone’s screen. For example:

First, take a minute or two to really look closely at every part of the photograph. What do you see? I find it helpful to speak out loud, or at least to organize my thoughts into coherent sentences so that I don’t miss anything; language helps me to process what I’m seeing. No observation is too small or too obvious. In this photograph, I see four little girls standing on a dirt road. The girls stand in front of two buildings, one built in a mid-century American ranch style, and the other built in an Asian architectural style and surrounded by a fence with an elaborate entryway. On the left hand side of the image, I see a large white water tower on big metal stilts. On the right, a tree leans into the frame. The trees, combined with the fluttering of the girls’ hair and coats, suggest that it was windy out that day. There are statues in the garden behind the fence, and telephone poles in the distance. In fact, one telephone pole leads my eye to another building that I didn’t initially see.

What is the image made of? This work is obviously a photograph; knowing what I know about photography, I know that it is a black and white gelatin silver print. This information can help me to determine when the image was made: gelatin silver prints were most commonly made between 1900-2000, which is a fairly broad range, though we have other context clues to help us determine the date, such as clothing and architecture styles. If I can hold the image, I like to think about who else might have held it, and why, and how it might have circulated or traveled. This photograph could have been a family photograph, or a journalist’s image, or a photograph made by a documentarian. Maybe it was stored in an album, or printed in the newspaper.

If I’m looking at a photograph, I ask myself where the photographer was standing when they took the picture, and why. In this case, the answer is not particularly complicated: the photographer is standing in the road, and photographs the children from an angle. But this simple observation can actually tell something about the photographer’s intentions. Why didn’t they take the photograph head on, and from a closer vantage? What does the angle afford us that a more direct composition would lose? And what do we lose from this perspective?

However simple, the last question can tell me so much about this picture and the person who made it. I can guess that because the photograph is not a close up view of these children’s faces, it was composed specifically to show them in the context of their surroundings. Rather than frame the image so that we can only see the Asian-style building, however, the photographer chose to juxtapose it against the adjacent ranch-style house and water tower, both of which suggest to me that the photograph was taken in the United States. This isn’t a close up portrait of four children; it’s a photograph of four children shown living in a diverse neighborhood, likely in the United States. Their clothing and the architecture surrounding them suggest that this photograph was made before or during World War II. They look like they are of Japanese descent, which makes me wonder if they were impacted by Executive Order 9066. I think about the immigrant experience in the United States, now and throughout this country’s history; I think about my grandfather who was detained by the United States government during World War II because he was an Italian immigrant, and how he never told his children, or spoke Italian in their presence.

You can see here how an unassuming image without any text or caption can still say so much.

I’ll show my hand, which is that we are fortunate to have some information about this photograph. The photograph is titled [Buddhist temple, Terminal Way, Terminal Island, Los Angeles, 1932-33], and was taken by the German photographer Anton Wagner. As an art historian, I’m lucky when I have this much information to go off of: knowing the photographer allows me to probe deeper into his background and intentions, and the title can tell me so much, not least the fact that the building shown is a Buddhist temple, and that the photograph was taken ca. 1932-33 on Terminal Island—a Japanese American fishing community that, as it happens, was the first to be evacuated following Executive Order 9066. But I believe that pictures can tell us so much more than any caption can.

My last piece of advice is to try to look with a close but curious eye. Pictures do not exist solely as a record of the past, or as a container of information and data. A picture is not a question to be answered; we do not look so that we can be “right.” We look because photographs and works of art have things to tell us about what it felt like to live in an earlier time, and about how we relate to people with whom we have seemingly little in common—be it these four little girls, or a painter, or a sculptor living in Athens in 500 BCE. They allow us to admit just how much we don’t know, and to feel vulnerable when they elicit emotion. I believe that looking closely at pictures make us more human, in increasingly technological times.