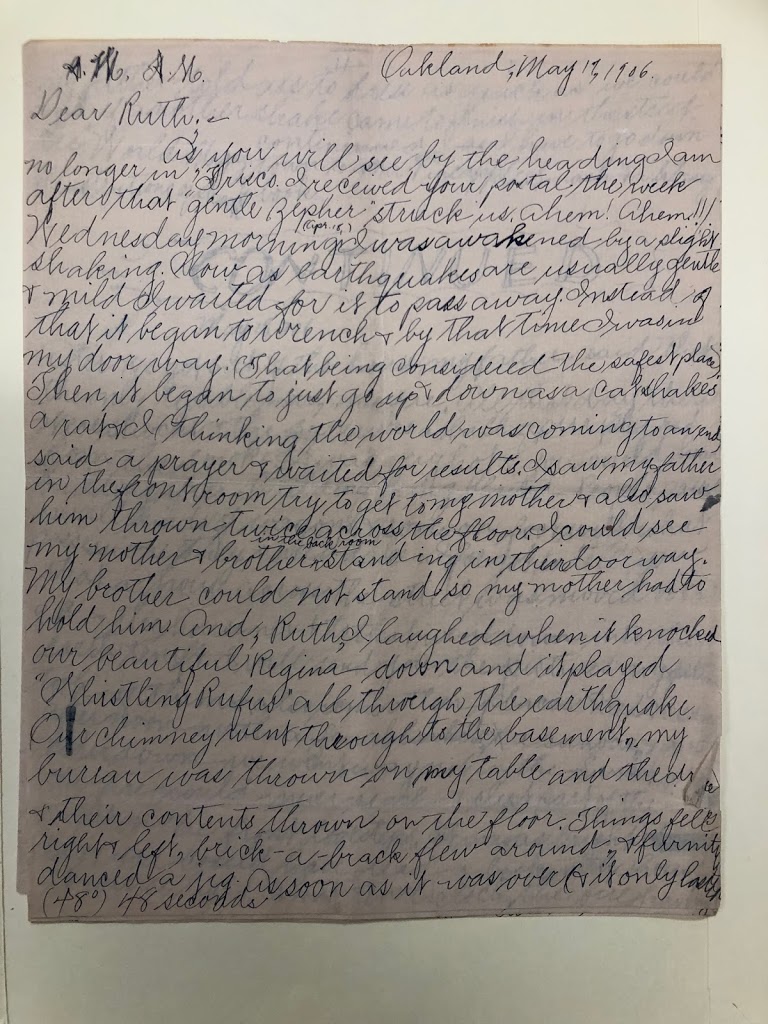 This post spotlights a primary source digitized from the California Historical Society’s collections for Teaching California, a letter written by 12-year-old Elsie Cross during the 1906 Earthquake and Fire. You can now view this source in the Grade 2 Inquiry Set “Why Do People Move?”

The 1906 earthquake and fire was a defining moment in San Francisco history. It was a disaster that changed the city’s social, economic, and cultural fabric, and to this day we often think of its history as divided into pre-earthquake and post-earthquake eras.

Photography, including the technology to produce outdoor shots, was gaining popularity by 1906, and the California Historical Society is fortunate to have a number of surviving images that document both the destruction and reconstruction of the city. Of equal importance are surviving personal diaries, journals, and letters that describe how residents coped with the aftermath of the disaster. One such document is the correspondence of Elsie Cross, a 12-year-old girl living in the Western Addition of San Francisco when, on April 18th 1906 at 5:12 a.m., an earthquake of massive force shook the city. Two letters to her friend Ruth, dated May 17-18 and May 28, give us a rarely explored child’s perspective of this event. The letters provide a firsthand account of the quake itself, the family’s escape from the house to the Sunset, and their eventual relocation to Oakland

Elsie’s description of the earthquake is notably poetic: “Things fell right & left, brick-a-brack flew around, furniture danced a jig,” and her strength and sense of humor shines through: “My brother could not stand so my brother had to hold him and, Ruth, I laughed when it knocked our beautiful Regina down and it played “Whistling Rufus” all the way through the earthquake.”

Through her words, however, the reader can also sense the fear and worry of Elsie’s parents as they flee, holding their children tight, wondering if the fire will reach them or if the earth will shake again:

“Wednesday afternoon with a few blankets, a canvas, and an eiderdown we went way out in the Sunset where the fire could never reach & slept part of the night on the front doorsteps. It was bright as day & you could have read a book in the house it was so light. About ten o’clock, the fire having died down, my brother & I both slept on one side of my mother. Both my mother & father did not sleep. The next day in the morning my mother & father & I packed in a steamer trunk old family laces, miniatures, & clothing. In the afternoon my father drove us in his buggy & we put the silver, jewelry, family pictures, & blankets in & went out into the Sunset…I felt very sorry to leave this and my piano, but as nothing else could be done I did not say anything.”

Elsie Cross’s letters and other earthquake material can be accessed at the North Baker Research Library at the California Historical Society during public hours, Wednesday through Friday from 1PM to 5PM. Full transcript below. Additional photos of the 1906 earthquake and fire can be viewed on CHS’s digital library.

As you will see by the heading I am no longer in Frisco. I received your parcel the week after that “gentle zepher” struck us. Ahem! Ahem!!! Wednesday morning I was awakened by a slight shaking. Now as earthquakes are usually gentle and mild I waited for it to pass away. Instead of that it began to wrench & by that time I was in my door way. (That being considered the safest place). Then it began to go just up & down as a cat shakes a rat and I (thinking the world was coming to an end) said a prayer & waited for results. I saw my father in the front room try to get to my mother and also saw him thrown twice across the floor. I could see my mother & brother standing in their doorway. My brother could not stand so my mother had to hold him. And, Ruth, I laughed when it knocked our beautiful Regina down and it played “Whistling Rufus” all through the earthquake. Our chimney went through to the basement, my [ ] was thrown on my table and the drawers & their contents thrown on the floor. Things fell right & left, brick-a-brack flew around, and [ ]  danced a jig. As soon as it was over (& it only lasted (? ) 48 seconds…

[page 2] …my father told us to dress as quick as we could and if another shake came to finish in the street. Continued as I have to go downtown to get a Pineapple Smash & a library book. See “World [ ] Illustrations of Shock”

May 18, ‘06 After we got out of the house my father said that the only trouble now, was fire. All that day there were shocks and the sun was a ball of purply red from the smoke. It was very hot. You could hear building after building being blasted. People passed in all kinds of wagons and some on foot with what possessions they could take. I forgot to tell you that a house across the street was moved over 9 ft. and the house next to that went down into the earth 10 ft. I will send you the pictures my father took of them and also some other places. Wednesday afternoon with a few blankets, * a canvas & a eiderdown we went way out in the Sunset where the fire could never reach and slept part of the night on the front doorsteps. It was as bright as day and you could have read a book in the house it was so light. About ten o’clock, the fire having

[page 3] died down after & Ill my brother and I each slept on one side of my mother. Both my mother and father did not sleep. The next day in the morning my mother and I packed in a steamer trunk old family laces, miniatures, and clothing. In the afternoon my father drove up in his buggy and we put the silver, jewelry, family pictures, & blankets in & went out in to the Sunset. My room is all old fashioned furniture of mahogany and my wall, bedspread, and other trimming is old rose. I felt very sorry to leave this & my piano, but as nothing else could be done I did not say anything.  Where we went was out by the park, & the place was a grocery store & saloon. They had their own cow and chickens and also liquors & grocery provisions, the latter being stored in the house. There were 4 little children and a baby one month old. The first night we slept outdoors and they did not stop blasting when night came on but blasted all through the night.  In the morning I was awakened by a dreadfully loud blast and heard my mother say that she had watched the fire all night and it was now, she thought, under control.